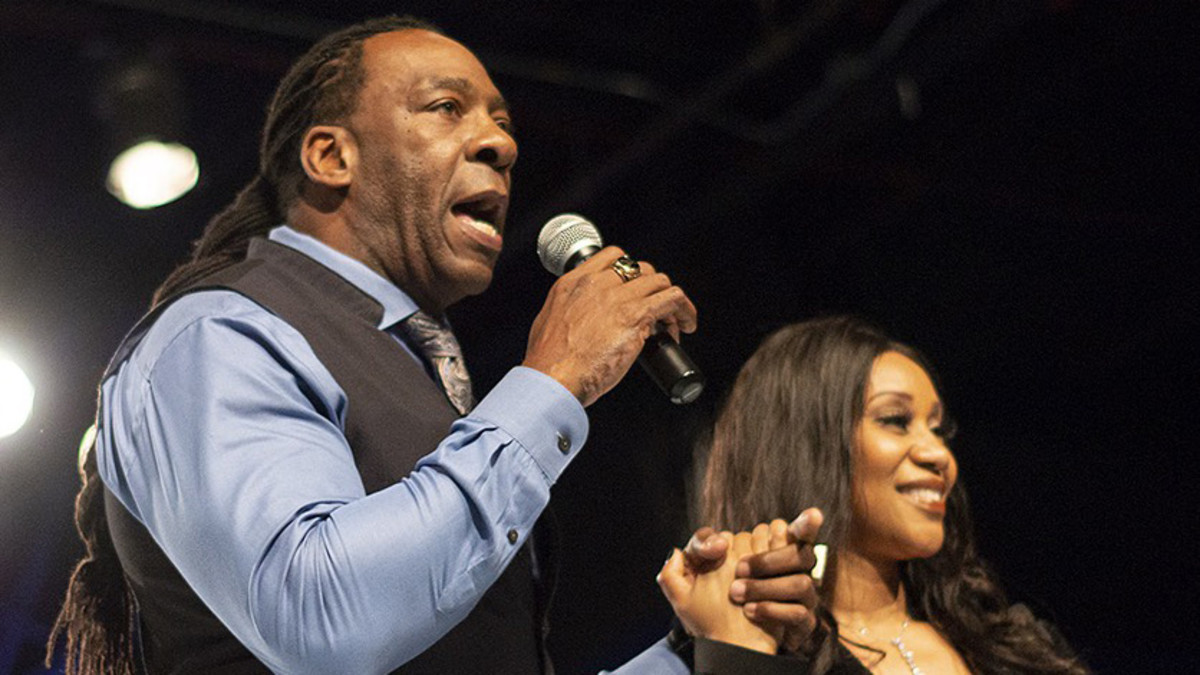 This November, Booker Huffman is urging people to vote.

Huffman, who is WWE legend Booker T, and his wife Sharmell have teamed with filmmakers Deon Taylor and Roxanne Avent Taylor for the “Be Woke.Vote” tour for an event on Saturday, Oct. 10 at Huffman’s Reality of Wrestling show in Texas City, Texas.

“Living in America and seeing the things we’re seeing, that’s what moved me to be part of something like this,” Huffman says. “My kids are going to grow up in this world, and I want them to be in a better place than we are right now at this time. And I want that for wrestling fans, too.

“My mother used to always say, ‘There is no gray area between right and wrong.’ This is a right-and-wrong election, and people need to participate and vote.”

The non-partisan event is a free admission drive-in show, fittingly named “Swing Vote.” There is a double meaning to the name, beyond the obvious connection to swing votes in tightly contested states that will play a crucial role in the upcoming election. Reality of Wrestling star Abel Andrew Jackson, who challenges ROW Champion Ryan Davidson at the show, is managed by Paula Ticks (get it?) and has a finishing maneuver called the Swing Vote, which is a neckbreaker.

“Our crowds at Reality of Wrestling are always raucous and fun and cheering and chanting, and we thought we’d take that and use the same energy to get people to the polls,” says Sharmell Huffman, who is well known to wrestling fans for her work alongside her husband. “We were afforded the opportunity to partner with Be Woke.Vote, and it is the perfect collaboration to use the energy of the wrestling community and keep it going all the way to the polls.”

In addition to a night of pro wrestling, there will also be a focus on the importance of voting—and voting all the way down the ballot—in November.

“One of the great parts about Be Woke.Vote is that they’re really big into voter engagement and voter education,” Sharmell says. “Education will be a large component of this event, and we’re really encouraging people to vote all the way down the ballot. A lot of people aren’t aware of all the issues that are at stake right now in the presidential election, as well as the state and local elections. That’s how you can create true change. And we’re going to give all this information in a fun and entertaining way at the show.”

The importance of the event was further heightened on Thursday when Texas’s Republican governor Greg Abbott announced a harsh restriction on the number of absentee ballot drop-off locations. The Be Woke.Vote initiative works to involve voter participation in younger generations that are often disenfranchised.

“We’re thrilled to connect with Booker T and Sharmell,” says Deon Taylor, an activist who founded Be Woke.Vote with his wife, Roxanne Avent Taylor. “And wrestling is the heartbeat of America. Being able to team up and do this event in Texas, and explain why your voice matters, why people like [civil rights leader] John Lewis risked his life to give you the platform to vote, and how many people were hung and killed fighting for the right to vote, it’s a great melting pot for us to talk about getting out to the polls and vote.”

“We want to educate and amplify the importance of voting,” Avent Taylor says. “We’re focusing on educating minorities and young voters how to vote and what your vote actually means. We want to amplify the message that a person’s voice counts, and so many people are realizing their voice is needed at this time.”

This event is part of a “Rep Your City” tour that will also travel to other parts of the country. It begins in Texas at the Reality of Wrestling show, and Huffman expressed his excitement in sharing the importance of this election with wrestling fans.

“Wrestling fans are part of my family,” Huffman says. “I’ve always wanted all the fans to be a part of Booker T, not just Black kids. Of course I was representing for them, but I wanted the Booker T experience to be inclusive. And this election is important to me.

“We want people to live together in peace and harmony, and that’s not what’s happening today. This event is designed to motivate people to use their power for good.”