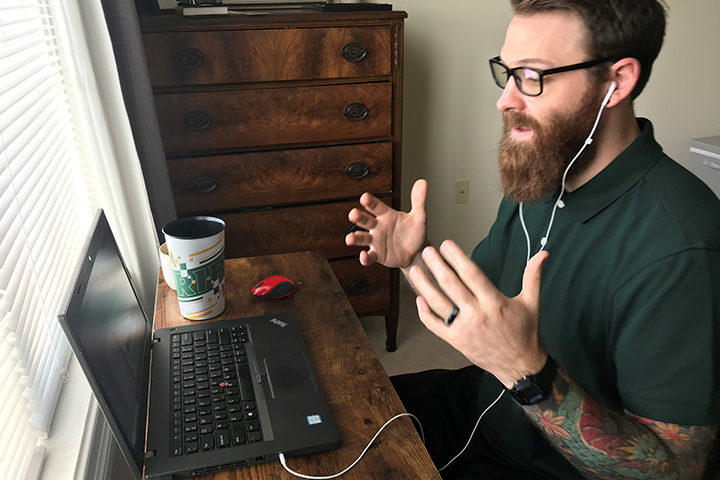 School is back in session, but the pandemic continues. As a result, teachers across the country — at all levels — are conducting their classrooms online.

For those who work in special education, it’s been particularly challenging. Their students have various learning differences that make teaching a challenge even in the best of circumstances. Now, that in-person connection, which is so vital to teaching and learning, comes through a laptop camera lens.

Zack Fetters ’16, M.Ed. ’18 and Josh Dulaney ’18, M.Ed. ’20, both graduates of the William & Mary School of Education and former linebackers on the Tribe’s football team, are relative newcomers in the teaching profession. But even if they were in their mid-50s instead of their mid-20s, this unprecedented situation would require just as much flexibility and ingenuity.

“Our job as learning specialists is built on relationships, and that’s so much easier to have in person,” said Fetters, who is in his second year at Laurel Lane Elementary in Williamsburg. “I’ve had to be creative in how I maintain relationships and build relationships with new students.

“One of the saddest parts with our students is they’re missing the social aspect of what those young years really are. That’s what a lot of people are trying to save, and with great reason. It’s a totally different environment when it’s through a computer.”

Dulaney is in his first full year at Loudoun Valley High in Purcellville, Virginia. He works with students as young as 14 and as old as 22.

“It’s had its challenges, and it definitely has required a learning curve, especially with the population I’m working with,” he said. “I’ve had a lot of parent involvement. The parents I’ve been working with have been tremendous in supporting their kids.

“It’s been kind of difficult for the students to log on by themselves. I do have some who are capable of doing that, but keeping them attentive through a one-hour class has been difficult.”

Fetters and Dulaney have found special education to be their calling. Looking back, it’s easy to see how that happened.

After earning his Bachelor of Arts in philosophy, Fetters went into the coaching profession. As a graduate assistant at Stevenson University, a Division III program in Owings Mill, Maryland, he coached the linebackers.

Stevenson went 9-2 and made the NCAA playoffs. Fetters enjoyed his introduction to coaching, but it didn’t fulfill him.

“When I was able to sit and reflect, I had always loved being around kids at young ages,” he said. “I have two younger brothers and I think that plays a lot into that.”

Fetters’ brothers, 16-year-old twins, are on the autism spectrum. They were 7 when their older brother left home in Montgomery Village, Maryland, for William & Mary in 2011.

“Knowing so many individuals with autism, from my brothers to working in volunteer programs in Maryland, I became really interested in learning more about it,” Fetters said. “I felt one of the best ways to do that was through special education.

“When you speak to so many different people involved in the world of neurodiversity or special education, it almost always starts with that personal connection. I would say it gives an extra boost of purpose of being able to see and take that perspective. It really changes the way you see the world.”

Fetters’ first job was at Warhill High for the 2018-19 school year. He was named Rookie Teacher of the Year in the Williamsburg-James City County district. He was switched to Laurel Lane the following year.

Dulaney was in the fifth grade when his brother, Jonah, was born on Feb. 5, 2007. The baby had a congenital heart defect that was caused by Down syndrome. He died 25 days later.

Jonah would be 13 today. His memory has inspired his brother to take a career path in special education.

“It was around middle school when I had the idea that working in special needs, either adults or kids, was something I wanted to do,” Dulaney said. “I wasn’t sure how I wanted to do that. I kept the idea in my head that at some point, I want to get involved with that.

“Then the opportunity to play at William & Mary happened. And they had a (graduate) special education program.”

Another influence for Dulaney was his mother, Stephanie, who taught special education for five years.

“She would talk about her experiences as a teacher and the students she got to work with,” Dulaney said. “I also had the opportunity to go into her class sometimes.

“To work with the kids and get to be around them, the energy they brought day in and day out, it was so contagious that I fell in love with it. I still have that feeling today.”

After earning his Master of Arts in education in January 2020, Dulaney taught at Countryside Elementary in Sterling, Virginia, for two months before COVID-19 forced virtual learning. Dulaney was able to help some of the older teachers with technology, and they were able to assist with his lesson plans.

“At no point did I feel like I was overwhelmed,” he said. “It was tough because nobody knew what to do. They would give us news one night, and two days later, ‘No, we need to do this instead.’ It was fly by the seat of our pants in a way.”

About a week before the shutdown, Fetters and his wife, Madeline, welcomed their first child — a boy named Duke. That added to the challenging times, but he loves fatherhood.

As for virtual teaching, Fetters cannot wait to get back to normal.

“Virtual teaching is exhausting,” he said. “Seeing the kids in person, you have the adrenalin and the boost. Doing it through a computer, it really is exhausting.

“I don’t think many teachers wanted to be sitting at a desk for their work day. A desk job is usually not what the teacher wanted, but it kind of feels like we have that right now.”