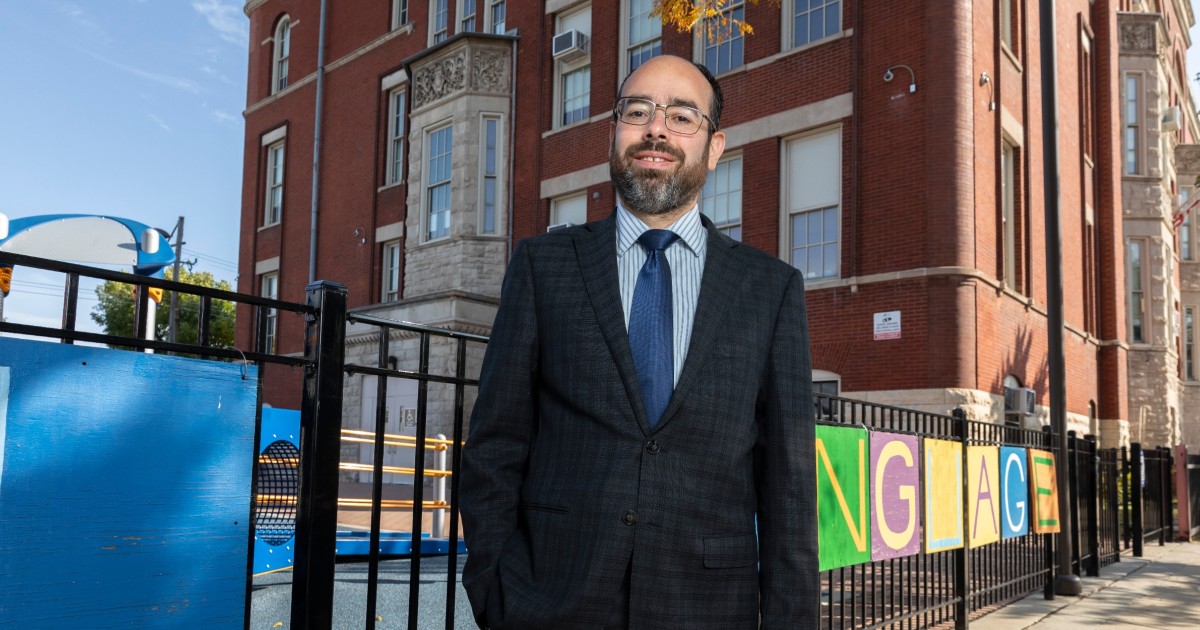 When Antonio Acevedo’s two children were ready for school, he was determined they not only learn English but also retain their native Spanish. He applied and won a spot at Inter-American Elementary, a 40-year-old public dual language school that draws students from around the city.

Then, when he had a chance seven years ago to become principal of one of the city’s other dual language schools — a neighborhood elementary school nestled in Pilsen, one of Chicago’s oldest and proudest Mexican neighborhoods — he jumped at the chance.

“All the research is clear that ‘English Language Learners’ who participate in dual language programs outperform their peers who were in other programs in the long run,” he said

At the time, there were only about a dozen public dual language schools in Chicago, including Inter-American and Acevedo’s Whittier. Most parents who wanted their children to read, write and speak in Spanish and English had little choice but to send them away from their home neighborhood.

But in the last five years, that has drastically changed. Chicago Public Schools designated 26 new schools as dual language, bringing the total to 40. Two new schools were named this summer as part of a relatively new process where schools can apply for specialty programs, including dual language.

But with this expansion comes new concerns. There are questions about whether the school district can support so many dual language schools, even as it is already struggling to provide strong programs for all 67,000 students who are learning English across the district.

And critics are asking why so many dual language schools are being developed in gentrifying neighborhoods, like Logan Square, where many Latino and other immigrant families can no longer afford rents and are moving out.

Dual language is considered the gold standard of bilingual education, and many have long hoped the school district would expand and invest in it, said Sonia Soltero, a professor of language and curriculum at DePaul University in Chicago and a former dual language teacher.

Most so-called “English Language Learners” are in what is called transitional bilingual. In that program, students are taught in both their native language and English, but the goal is to learn enough English to move into English-only classes within a few years.

Soltero said students placed in transitional bilingual are sometimes seen as behind. In the end, many children don’t learn how to read or write well in their native language, even though that’s a goal of the program.

But there is an important caveat, Soltero said. In order to offer dual language well, schools need enough teachers who can instruct in Spanish and are certified to teach subjects like middle school science and math. Few college education programs offer classes to prepare for dual language instruction.

“Dual language is a lofty goal and ambitious,” Soltero said. “But it is set up for failure if you don’t have the teachers who are trained, [and] support and buy in from policymakers. If these things are not in place, this does not work very well.”

Chicago Public Schools launched an initiative to try to solve some of these potential problems. It includes bringing principals of dual language schools together to learn from each other and an administrator who is in charge of providing training to dual language schools.

But one staffer who worked in CPS’ central office supporting dual language programs told WBEZ she left and went back to teaching. She said she was one of only two people in the central office charged with holding dual language schools accountable. And she knew schools desperately need more teachers like her who can take on subjects in Spanish.

“You are reaching for these very high expectations, but, without the staff, you can’t reach those high goals,” she said. “So at that particular time the frustration I personally was having, as an educator and also as a parent, was high.”

She said what is being called dual language varies a lot throughout the school district.

As a parent and an organizer for the Logan Square Neighborhood Association, Leticia Barrera fought for more dual language programs in area schools. But the sudden expansion has surprised her.

“I am worried about why the district is bringing now dual language and not bringing resources to the [transitional bilingual] program that is already there for years,” she said.

Recent audits of transitional bilingual programs in Chicago Public Schools show that 72% are falling short, according to an analysis by WBEZ. Nearly 400 schools with more than 20 students who are English learners were evaluated, Among the problems highlighted in audits are deficiencies in helping students successfully master English and a lack of bilingual teachers certified in the subject they teach.

This analysis comes even as a recent study by the University of Chicago showed that the vast majority of students in transitional bilingual reached English proficiency by eighth grade, and those students on average had better attendance, math test scores and grades than students who were native English speakers.

The school district also points out that the current bilingual teacher vacancy rate is less than 2%, which is lower than in recent years.

But Acevedo from Whittier said there is cause for concern about the expansion of dual language. He notes that the new, two-dozen-plus dual language schools are starting with preschool or kindergarten and adding a grade each year.

He said it is not as hard to find Spanish speaking teachers for primary grades as it is for upper grades, where teachers have to also be certified in specific subjects.

Another challenge with creating so many dual language schools: Several neighborhoods once home to many Spanish-speaking immigrants are gentrifying or have gentrified. This has pushed families out who are unable to afford housing, and now some of the oldest dual language schools are now in desperate need of students.

A WBEZ analysis of dual language schools found that half are in Chicago neighborhoods that are at high risk of gentrifying, according to data from University of Illinois at Chicago’s Voorhees Center for Neighborhood and Community Change. The Voorhees Center makes this determination by looking at demographics and area rents.

Two of the neighborhoods with the most dual language schools — Logan Square and West Town — are two of the most gentrified.

The dual language expansion is creating some suspicion, especially because they are also popular among white, more affluent families who want their children to learn two languages.

Barrera said she worries the school district is adding these programs in Logan Square schools to make them more attractive to new residents.

“Instead of honoring and bringing pride from our native language, in this case Spanish, I think it is a way of playing with part of our culture,” Barrera said.

Gentrification also has left Principal Antonio Acevedo’s school, Whittier, in a precarious position. It has a deep connection to the culture of the Pilsen neighborhood.

But this year, Whittier has less than 200 students, down from almost 600 a decade ago. This is problematic because schools are allocated money based on enrollment. And the school district has a history of closing under-enrolled schools.

Marco Camacho, a teacher at Whittier, said when he was growing up in Pilsen, he longed for a school where his culture and home language was taught and respected. At the time, Whittier wasn’t a dual language school. But now that it is, he said it pains him to see the school lose students.

Camacho and a group of dedicated parents convinced the school district to turn Whittier into a magnet school. It will now be one of three magnet dual language schools in the city. This allows it to accept students from across the city, including students who used to live in the neighborhood, and offer them busing.

“We have great leadership, great teachers, a lot of experience. And so, you know, what makes sense is for this program to be solidified here in Pilsen because of our history and then duplicated in the neighborhoods,” he said. “We need to validate this cultural jewel that we have here in the neighborhood.”

Making Whittier a magnet school will allow some of the families who have left Pilsen to come back, counteracting gentrification by giving them a continued connection to their community, said community organizer Teresa Contreras.

Also, being a magnet school could boost the school’s prestige and draw children of the new residents of Pilsen, Acevedo said. The school also gets $10,000 from the school district that it plans to use to market the school.

Already fewer Whittier students arrive speaking Spanish as their primary language, Acevedo notes. To adapt, his staff has been trained in offering the kind of dual language program where few students arrive knowing the second language.