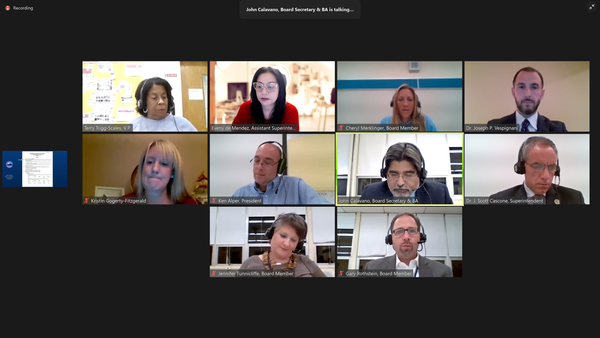 WEST ORANGE, NJ — As the West Orange Public School (WOPS) District begins its countdown towards a Nov. 9 hybrid reopening, WOPS Superintendent Dr. Scott Cascone explained that the district is now preparing staff for their students’ return to brick and mortar classrooms. At the same time, the district’s autistic students started on Monday, Oct. 12 with a staggered reintroduction for other special needs populations between next week and Nov. 9.

Assistant Superintendent of Curriculum and Instruction Eveny de Mendez added that when in-person classes begin the week of Nov. 9, the students will be broken in different cohorts–two at the elementary schools and four at the middle schools and high school.

She continued that in order to prepare for the incoming cohorts, the district is planning  professional development (PD) sessions centering around instructional strategies for teaching both in-person and remotely.

Our newsletter delivers the local news that you can trust.

You have successfully signed up for the TAPinto West Orange Newsletter.

On the next board agenda, de Mendez said that the district is hoping to have members of the educational technology team reappointed so that they can support teachers and provide PD.

“This would not take away from instruction,” de Mendez said, explaining that unlike the beginning of September during which school was closed for PD, these sessions would take place in the afternoons or on Fridays.

Around the week before Nov. 9, de Mendez continued that staff would begin practicing how to receive students from their buses, how to use one way hallways, reviewing all the health and safety protocols, and practicing safety and fire drills.

Safety drills have become “difficult or impossible to do with social distances,” Cascone said, explaining that Errol Brudner from security firm StoneGate Associates had come to train school administrators and principals in modified drilling protocol last week to prepare for students return to school.

In terms of the special education populations, Special Needs Coordinator Kristin Gogerty-Fitzgerald explained that the district’s students with autism and students with pre-school disabilities reported back to school with a hybrid model beginning Monday, Oct. 12.

Other groups are being planned to be brought back prior to Nov. 9, but there is no anticipated return date for the remaining programs.

“This determination will be made as we’re working alongside the ventilation remediation process,” Gogerty-Fitzgerald said. She then continued that from a safety standpoint, she and Dawn Ribeiro were waiting for PPE including disposable isolation gowns, desk barriers, clear mouth face masks, face shields and rubber gloves, so that they could be distributed to staff.

The survey to request full time learning which has been resent out to parents, has a deadline of Oct. 16 and will be reconfirmed during the week of the 18th.

In response to a question about the having to choice to transition from full virtual schooling to hybrid schooling from West Orange parent Carol Anne Holland, Cascone said that moving from hybrid to virtual is “less complicated” than moving from virtual to hybrid, which involves more logistics.

“But,” Cascone said, “if at any point in time in the year, you want to usher in a transition for your child in either direction, we’ll be able to do that for you. It’s just a matter of having the adequate time to make sure it’s done effectively and safely.”

During the meeting, the district goals for the 2020-2021 school year were unanimously approved by the WOBOE.

The WOBOE also recognized the retirements of several district staff members including Bob Csigi, Director and Buildings and Grounds after 11.5 years, Mary Mondalto and Rachel Mondalto, paraprofessionals and sisters who worked at Kelly and St. Cloud Elementary respectively and have worked in the district for 12 and 18.5 years. Night-shift Custodian at St. Cloud Daysi Tello will also be retiring after working in the district for 14.5 years.