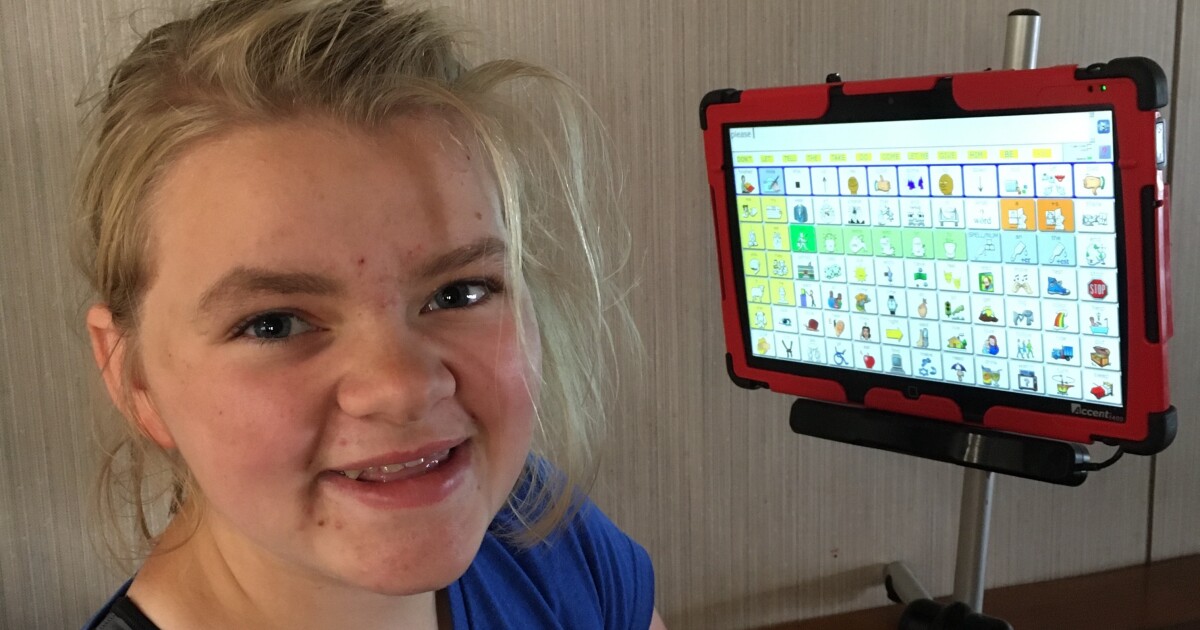 On a Friday morning this month, Angie Snyder and her daughter Ellie were in the dining room of their Storm Lake home, where Ellie was practicing reading and sorting words by their vowels. Angie held up a small white card with the word “fox” on it for Ellie to sound out. Ellie used a special touch-screen device called an Eyegaze to say the word. It helps her communicate words and sentences that she can’t say herself.

“Fox,” the device spoke for Ellie.

Ellie is 14, but in the fourth grade. She has a rare neurological disorder called Rett Syndrome that affects her speech and motor coordination. She is one of about 70,000 students ages 3-21 who require special education services in Iowa, according to data from the Iowa Department of Education for the 2019-2020 school year.

Angie said Ellie requires a higher level of care in school and needs a lot of help with everyday tasks like going to the bathroom and washing her hands, so her family decided she would learn remotely this school year. Additionally, when Ellie gets sick, she can’t blow her own nose. Angie said she wasn’t sure how Ellie would respond to the coronavirus.

“We just don’t want to take any chances with her contracting the virus, so we’ve really just like closed down our family,” Angie said.

Last spring, the Storm Lake Community School District required virtual learning in its upper grades because they could meet the needs that children in special education required, according to the district’s superintendent. Online learning was voluntary for students in Ellie’s grade. Angie said Ellie still tried the program that was available for virtual learning, but it did not work well for her. So they decided to tackle reading, math and other subjects at home and over Zoom.

“We’re doing the best we can, but it’s not the same at all.”

Ellie needs certain supports, like an aide, who would normally be by her side for an entire day. She now Zooms with her each day for only 30 minutes. Ellie would typically go to speech therapy in school. Angie has tried to replicate that at home.

“We’re doing the best we can, but it’s not the same at all,” Angie said. “It’s totally different. I would be lying if I told you she’s getting all the exact same supports she would get at school. I’m not a licensed speech therapist.”

But Angie is a teacher. She took a virtual position this year so she could stay by Ellie’s side. Not every family is so lucky. So schools and Area Education Agencies have been working with families who felt remote learning would be best for their child.

“It may be coaching with a day care provider about: here is what we’re going to work on today,” said David VanHorn, the executive director of specialized services for Green Hills Area Education Agency in Creston. “And if you could help us with X, Y and Z, this is what would help.”

VanHorn is also the chairman for the collective group of AEA special education directors in Iowa. He said conversations started in the spring about how students with disabilities could still receive the services they need, like assistive technology. Things like speech pathology and physical therapy went virtual.

“There are students who need adaptive technology, assistive technology, for them to be able to be able to meet their needs,” VanHorn said. “So we talked about how we could have staff maybe drop something off at a curb for a student and a parent could pick them up. Then we could work with them electronically to help them understand how to use that particular device.”

VanHorn said AEAs and schools are “trying to be as creative as they can working with a family to meet those needs,” in remote learning.

Some children with disabilities have trouble engaging on a screen for a long period of time, so schools have provided recorded lessons in those cases. VanHorn said schools and AEAs worked with families to tweak a student’s Individualized Education Program (IEP) for virtual or hybrid learning. The IEP is a legal document that lays out what supports and services a child needs to succeed in school.

The Sioux City Community School District has set aside some staff to teach virtual learning exclusively this year. They teach students through Microsoft Teams and students complete learning apps throughout the day. Amanda Gibson chose virtual learning for her 7-year-old son, Oliver, who has ADHD. Oliver is in the second grade.

“This has been awful. And we’re now put in a position of having to choose our son’s safety over his education.”

Gibson said Oliver’s psychiatrist thought virtual learning would be good for him because of its flexibility. Oliver also has asthma, which could put him at a higher risk of getting COVID-19.

But Gibson said “it’s been extremely challenging” so far.

“He receives on average, an hour of direct instruction time with a teacher each day,” Gibson said.

Most of the day is spent doing learning apps. When math problems get more difficult, there isn’t a teacher there – other than Gibson – to help Oliver. He no longer has group therapies with his special education teacher and his friends, Gibson said.

The school district’s return to learn plan for special education addresses that adjustments made need to be made for students on IEPs in a virtual setting. But Gibson said Oliver is still missing social interaction with his peers. That’s hard to do when a child isn’t in their classroom.