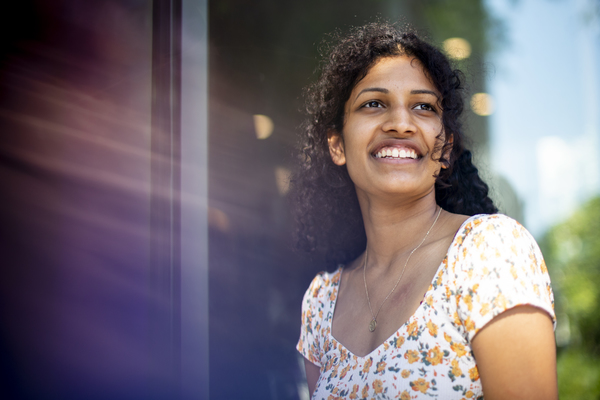 Now that she has returned to campus for her graduation year at Northeastern, University Scholar Arunika Makam is looking forward to assisting younger students off-campus. She is co-president of the Northeastern chapter of Peer Health Exchange, a national non-profit organization that focuses on helping people of high-school age make healthy choices.

Makam and her co-president, Jacqueline Huynh, lead the effort in training their Northeastern peers to work with more than 800 students at 10 under-resourced high schools in Boston. The focus is on providing young people with the means to make good choices in terms of sexual health, mental health, and substance use.

09/04/20 – BOSTON, MA. – Northeastern student Arunika Makam poses for a portrait on Sept. 4, 2020. Makam is the co-president of the Northeastern chapter of Peer Health Exchange. Photo by Ruby Wallau/Northeastern University

Of the 250 volunteers involved in Peer Health Exchange programs in Boston, about 130 are Northeastern students, says Makam. The COVID-19 pandemic has forced them to create educational programs that can be accessed online, she adds.

“We want to make sure that kids are still getting health education,” says Makam, who expects to graduate in the spring with an undergraduate degree in mechanical engineering as well as a master’s in mechatronics. “It’s more important now than ever in terms of dealing with COVID-19 or mental health, or just making sure that good health practices are not being put on the back burner.”

When the pandemic forced Northeastern to close its Boston campus in March, Makam returned to her family’s home in Littleton, Colorado, where she lived with her parents and younger brother. She worked with Huynh to create a Peer Health Exchange website while also observing health and safety protocols with her family.

“We only really went out to the store—though once we went to the library, that was cool,” she says of her five months at home. “But we were taking it pretty seriously with wearing masks, and I think that that’s how my three roommates feel in Boston today. Wearing a mask and making sure to quarantine and social distance isn’t the hardest thing in the world to do, but it does have a big impact.”

Makam’s organization has always been focused on social justice issues. That approach has been deepened in recent months by the national focus on the Black Lives Matter movement.

“A lot of the students that we teach are Black and Latinx,” Makam says. “We want to be aware of the Boston history and how it affects the school system.”

She notes that many high school students may be tired by long early-morning bus rides, which are the result of court-ordered efforts to desegregate the Boston schools that began in the 1970s.

“We want to make sure that the college students understand where the high school students are coming from, because it’s possible that they have had very different experiences,” Makam says.

She says that all aspects of relationships with students should be considered.

“There are circumstances where a Black boy may be perceived as older than a white boy—even though they’re of the same age—and the Black boy is disciplined more harshly,” Makam says. “We have these internal biases that we’ve been conditioned to, so we’re trying to really recognize how these things affect our teaching, and how it’s possible that unconsciously you may be treating Black children more harshly than children of other races.”

When Makam was 12, she moved with her family from her native Massachusetts to India, where she attended The International School Bangalore in her father’s hometown. She started a non-profit service, Give Blood India, which enabled people in India to donate blood while preserving their privacy.

She is currently pursuing international fellowships that would help her understand how public policy influences the development of medical devices. She hopes to launch a career that will help make healthcare innovation accessible and affordable for the people who need it the most.

Originally published in News at Northeastern by Ian Thomsen