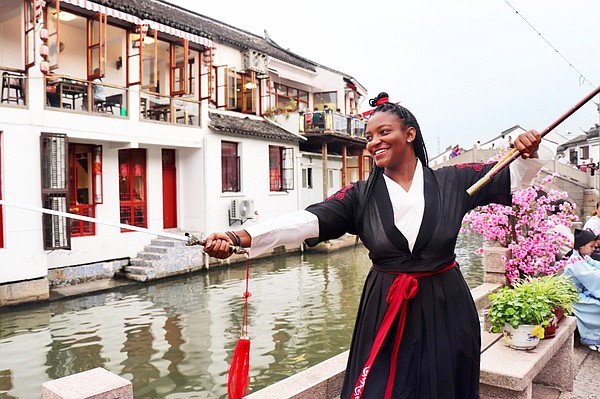 As she plans for graduation in May 2021, Alyssa Smith, a senior majoring in political science at the University of Arkansas at Pine Bluff, has been working to ensure her peers have access to and interest in the types of study abroad programs she has had.

After having pursued a number of international learning opportunities both in high school and during her studies at UAPB, last year she saw an opportunity to establish a program for UAPB students in the Central American country of Guatemala.

Smith first visited Guatemala when she was 13. Motivated by a deep-seated drive to see more of the world and improve her Spanish fluency, she leaped at the opportunity to attend a Spanish language program for high school students.

“After I returned home, I wrote an essay entitled ‘The Awakening,’” she said. “My eyes were opened to a lot of things. Before that trip, I felt I had always been searching for something more, and I wanted to know what the rest of the world was like. And after I returned, I realized traveling, seeing other places and meeting other people were things I want to do my whole life.”

Smith continued to study Spanish, and during her senior year at Central High School in Little Rock, she signed up for a week-long mission trip to Nicaragua.

“During that trip, I realized I was connecting with the people who lived there in a deeper way,” she said. “I had heard stereotypes about immigrants from places like Nicaragua in the U.S., and I had heard people use the blanket term ‘Mexicans’ to refer to all people from Central and South America. The experience in Nicaragua made me think about these generalizations and also that, at the end of the day, we are all the same and want the same things out of life.”

During her freshman year at UAPB, Smith decided to pursue a different kind of experience abroad. As part of a program sponsored by the HBCU — China Scholarship Network, she spent nearly two months studying at the Beijing University of Chemical Technology in China’s capital city in the summer.

“My going to China meant a great deal to me,” she said. “At first, my family and friends didn’t believe me or know what to think when I told them about my intentions. But after I returned, they started to get the picture that I won’t let anything stop me once I put my mind to a goal.”

The program in China reaffirmed her notions of the transformative nature of education and travel abroad. During the program, she enjoyed befriending other international students as well as locals.

“My time in Beijing opened my eyes to how ‘normal’ China really was,” Smith said. “I liked the food, the people and the scenery. This trip humanized the people and place that I grew up hearing so many bad things about. It made me realize that I wanted to go back for a longer period of time.”

After she returned to Arkansas, Smith started speaking to her peers about her experience and touting the value of education abroad. She also took part in a number of presentations hosted by the UAPB Office of International Programs and Studies, speaking to other students about the ins and outs of study abroad and answering their questions.

During the summer after her sophomore year, Smith traveled to Antigua, Guatemala, independently to participate in a two-month Spanish language program. After completing her solo trip, Smith saw an opportunity to coordinate a study abroad program herself.

She started working with Pamela D. Moore, associate dean for global engagement for the Office of International Programs and Services, and Juan Carlos Martinez, director of Centro Linguistico La Unión, to develop an internship program for UAPB students. She even contacted some of the people she met on her first trip to Guatemala at age 13 and asked if they would be willing to host students in their homes.

The following year, Smith’s goal was realized. On her third trip to Guatemala, she was group leader for four UAPB students participating in a Spanish language internship that she initiated. This arrangement, which was facilitated by the school’s international programs office, enabled her to participate in the program as an intern working under the oversight of a designated staff person with La Unión. As preparation for the experience, she worked as an intern for the international office under Moore’s mentorship.

“We at OIPS [Office of International Programs and Studies] trusted Alyssa in this leadership role because of her previous experience and maturity,” Moore said. “When we see that particular students have a passion for education abroad, we try to fashion opportunities for them. In planning these opportunities, there is always a need to ensure the safety of students and simultaneously ensure they have a level of independence. This helps instill long-term confidence and leads to unique educational and career opportunities.”

Smith admits there were some challenges with travel abroad in a position of leadership; in addition to helping her peers with paperwork and the practicalities of the travel, she had to help them overcome doubts related to culture shock and help them adjust to cultural norms in Guatemala.

“We didn’t always agree on certain things, but the memories we made as a group were unforgettable,” she said. “I sat back at the closing ceremony and thought, ‘I’ve done it.’ Juan Carlos gave me credit for accomplishing what I set out to do, and my peers said they were grateful for me. I then was filled with motivation to get more people who look like me to destinations like this.”

Smith said she hopes the UAPB program in Guatemala continues to operate for years to come.

“I see opportunities for the program to grow and for both UAPB students and Guatemalans from communities across the country to benefit from an exchange of ideas,” she said. “For example, we must connect with the Afro-Guatemalans and share our experiences. The things they are currently fighting for in their society are the things African Americans fought for a few decades ago.”

Smith said she tells other Black students that study abroad opportunities can be affordable. Though some worry the programs will be too expensive, she insists there are low-cost opportunities and scholarships.

For those new to education or travel abroad, she recommends looking for programs relatively close to home. She also says it is worth staying in a new location for at least a month to get a better feel for the people, culture and customs.

“In my opinion, it’s best to build up your experience step by step to see what you are comfortable with,” she said. “I started in Guatemala for one week and knew that in case of an emergency, my parents could come get me. Eventually, I returned to Guatemala for two months and enjoyed adjusting to a longer stay. In turn, the study abroad trip to Beijing pushed me to try a much-longer-term stay in China.”

In the fall of 2019, Smith moved to Shanghai and started a yearlong Chinese language program at Shanghai Normal University. Due to the covid-19 pandemic, however, the university was temporarily closed, and Smith had to return home.

“Even now that I’m back home in Arkansas, I feel I have to readjust to life in the U.S.,” she said. “I plan on returning to China once the university reopens.”

The months she has spent in China so far showed Smith she is capable of staying abroad longterm. Though she was a little apprehensive about spending Thanksgiving and Christmas abroad for the first time, she managed to celebrate and enjoy the holidays in Asia.

“I’m one of only three Americans at the university and the only African American,” she said. “There are groups on social media for African Americans living in China that help you feel connected to your own culture. On Thanksgiving, for example, I met up with a friend from one of the groups. We went out for dinner at a barbecue restaurant downtown.”

And on Christmas Eve, or “Noche Buena,” she went out to a Mexican restaurant with her Latin American friends.

“My close friends were all from Spanish-speaking countries,” she said. “This helped me feel less alone because there was at least one culture I was familiar with.”

Smith, currently a member of the Peace Corps Prep Program at UAPB, plans to join the Peace Corps after graduation. In considering the future, she is certain she wants to enable young people from backgrounds similar to her own to become more globally oriented.

“I want more people who look like me to benefit from the kinds of experiences I have had,” she said. “They stand to see the world in a different way and gain entirely new perspectives and opportunities.”

The University of Arkansas at Pine Bluff offers all of its Extension and Research programs and services without discrimination.

Will Hehemann is a writer/editor at the UAPB School of Agriculture, Fisheries and Human Sciences.

“My time in Beijing opened my eyes to how ‘normal’ China really was. I liked the food, the people and the scenery. This trip humanized the people and place that I grew up hearing so many bad things about. It made me realize that I wanted to go back for a longer period of time.” — Alyssa Smith, a senior majoring in political science at the University of Arkansas at Pine Bluff.