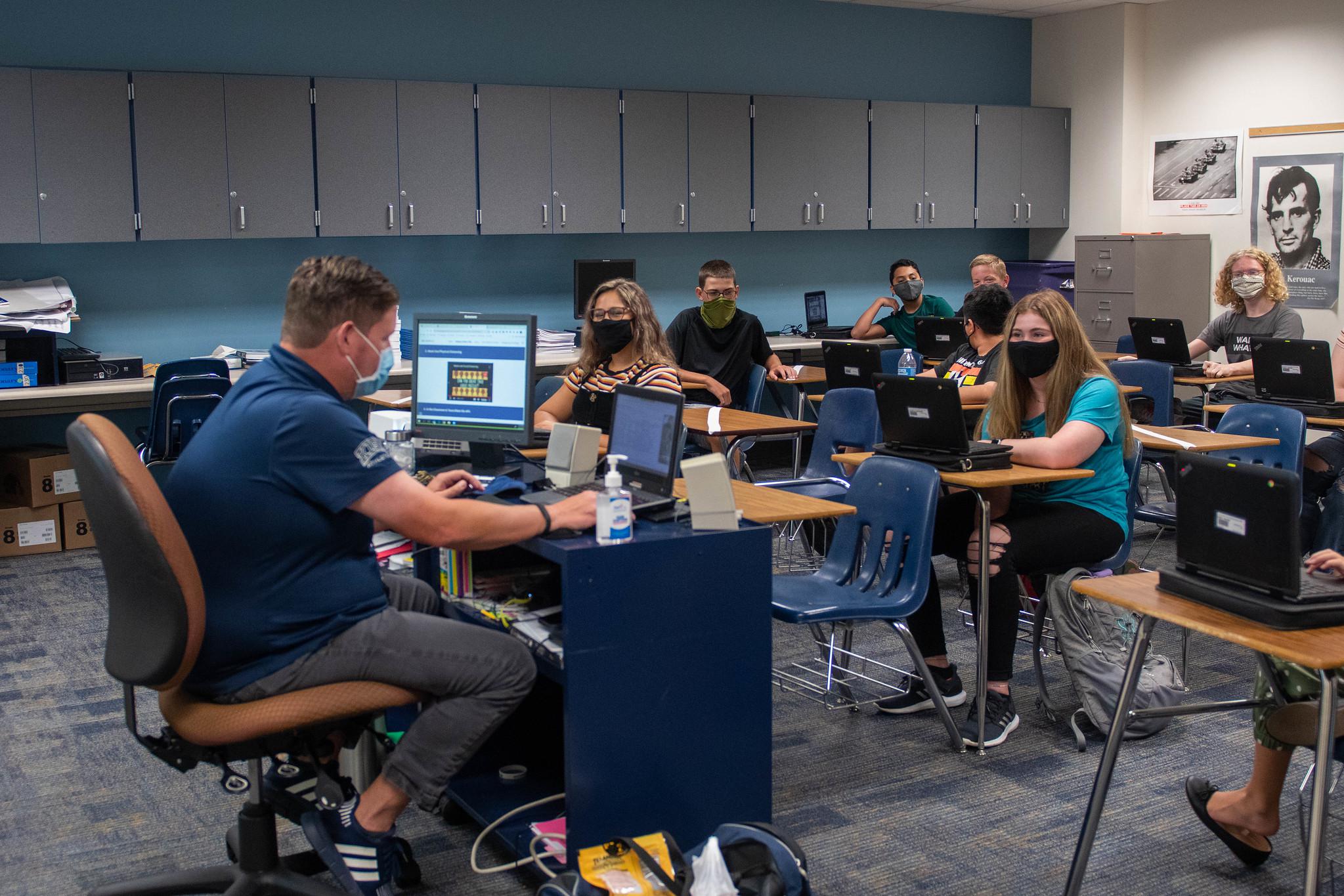 About 30 percent of his roughly 530 students had opted to learn online, and teachers spent most of summer reconfiguring instructional models and lesson plans to accommodate those who did not want to return to campuses on Aug. 19. However, once the school year began, it became clear many of the remote learners were logging on but not participating.

“I don’t think (Texas Education) Commissioner Mike Morath expected kids would sign in and do nothing. We didn’t expect it either, but that’s what was happening,” Oliver said. “Our kids were doing so poorly we said, ‘We can’t continue to allow our kids to not get their education.’”

Oliver ultimately decided to cancel the district’s virtual learning program all together, telling Louise ISD students and families on Sept. 22 that virtual learners had to make another choice: they could return to campuses for in-person instruction; withdraw to pursue home or private school; or transfer to another district that provides online learning.

Louise ISD is among only a handful of smaller, rural Texas school districts to eliminate their remote learning options during the COVID-19 pandemic, but others soon could join their ranks.

In a phone call with superintendents last Thursday, Morath responded to a question about districts eliminating their online options by reiterating that districts did not have to provide remote instruction. Although that has been the Texas Education Agency’s position since first outlining back-to-school guidance in June, some superintendents had been under the impression they were required to provide families with a remote-learning option.

No Houston-area districts have indicated that they are considering abandoning their virtual-learning options.

Decisions to abandon some online learning programs come as the state has reported the lowest average of new cases since June, when COVID-19 infection rates began spiking across the state. The Texas Education Agency and the Department of State Health Services updated their data on Monday and reported there had been 6,773 cases of COVID-19 across the state’s roughly 1,200 school districts since July. That represents a fraction of the more than 1.9 million students and staff who have returned to campuses, but many of the larger districts, including Houston, Dallas and Fort Bend ISD, have not yet brought large numbers of students back into classrooms.

While education leaders agree in-person instruction is more effective than distance learning, some teachers groups and health officials have argued the risk of spreading COVID-19 outweighs those benefits. Clay Robison, public affairs specialist with the Texas State Teachers Association, said the state still is averaging more than 3,000 new COVID-19 cases daily and that more than 800 of TSTA’s members have reported lax social distancing or sanitation practices at their schools.

“The reason districts are doing virtual learning and had the virtual option to begin with was to protect students and teachers and parents from exposure to the coronavirus,” Robison said. “We hope not many districts take this option and hope many continue with virtual learning.”

State funding also is at stake. Texas school systems receive state funding based on their average daily attendance, so if any of their virtual students withdraw or transfer to other districts because remote programs are nixed, the state funding they generated would go elsewhere, as well.

Still, Dallas Grimes, Superintendent of Roosevelt ISD about 8 miles east of Lubbock, said he has fielded phone calls from nearly 25 superintendents across the state after his 1,060-student district announced last week that it, too, would eliminate its online learning program. He said teachers in his district experienced the same problems with their virtual learning students that were seen in Louise ISD: students logging in but not turning in work, some parents refusing to talk to teachers — sometimes even blocking their numbers — and overworked teachers struggling to juggle the needs of kids in their classrooms and those learning online.

Grimes said virtual students struggled so much that 70 percent of them were failing at least one class.

“After the first six weeks wound down, we looked at the numbers and said ‘Look, kids off-campus aren’t holding up their end of the bargain,’” Grimes said, adding that phone calls to families did not help, either. “The parents weren’t holding up their end of the bargain of what they agreed to, so we decided we’re going to do what’s best for our kids, even if it costs us money.”

Ultimately, most of Roosevelt ISD’s remote students came back to campuses when the distance-learning program ended on Monday. Thirty of 44 elementary remote-learners came back, 30 of 34 junior high schoolers returned and 36 of 39 high school students reported back to campuses on Monday. Grimes said he stared in disbelief as some families took first-day pictures outside of the district’s elementary school, even though their students were entering their seventh week of instruction.

Mindy Dewbre, who teaches fifth grade English and reading at Roosevelt Elementary, said it was practically the first day of school for her only virtual learning student. Her parents did not want to send her back at the beginning of the school year fearing she would contract COVID-19 and suffer serious complications, but she hardly completed any work during the six weeks she was working from home. She would email Dewbre excuses for why she wasn’t participating — that she was busy or had a headache. Her parents stopped answering Dewbre’s calls. Meanwhile, Dewbre sometimes stayed up until 1 a.m. recording lessons and creating online assignments specifically for that one student.

She said when the fifth grader walked into her class on Monday, it was clear she was far behind her peers. She hopes to help her catch up now that she has more time to focus on her classroom.

“You don’t have time to put into your instruction when you’re reproducing everything you’re doing at night,” Dewbre said. “I thought I was going to hug the superintendent when he said they’d be coming back. I saw him three times that day and said ‘Has anyone told you lately how wonderful you are? Has anyone told you have a whole lot of fans today?’”

Robison worries that elation may be short lived, especially if a rise in COVID-19 cases force students in Roosevelt ISD and other districts back online. Although the district has only had one confirmed case of COVID-19 since students returned in mid-August, Robison said that number could grow if more districts require all of their students to return to classrooms.

“The fact that they don’t have many cases in their town may be due to the fact so many restrictions over the past 6 months helped keep virus from spreading more than it may have,” Robison said. “If everyone is back to school, and there’s more crowding in classrooms, you may find that you do have a problem. I think we should err on the side of health.”