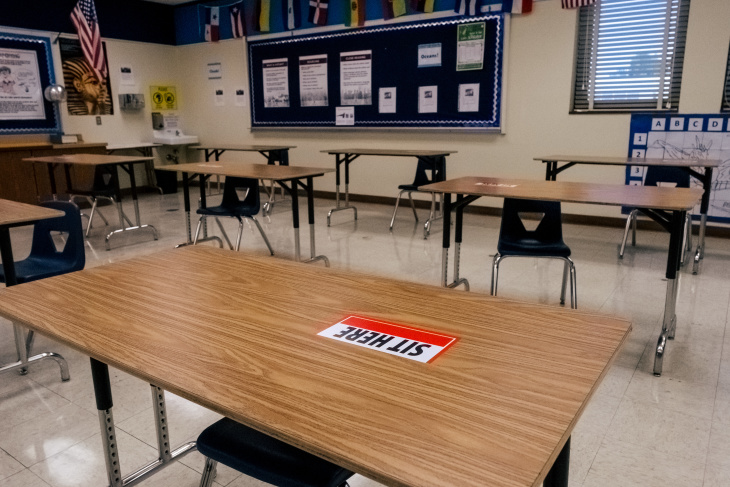 Our news is free on LAist. To make sure you get our coverage: Sign up for our daily newsletters. To support our non-profit public service journalism: Donate Now.

Nine parents of Los Angeles Unified students are filing a class action lawsuit against the state’s largest school district over how it handles distance learning, arguing the district’s online offerings fall short and violate their children’s right to an education.

Surveys of parents and the district’s own data have shown that students in these groups, in particular, have struggled with distance learning.

“It was a really hard time for the spring for [my son], in a place where he was so discouraged that he didn’t want to do anything school related,” said Keshara Shaw, a plaintiff and mother of a sixth grader in the district.

We are not using Shaw’s son’s name or naming the LAUSD school he attends to protect his privacy, as he is a minor.

When schools first closed to slow the spread of coronavirus in the spring, the district did not require its teachers to provide live instruction, per an agreement with the union representing LAUSD teachers.

Since then, the California legislature passed Senate Bill 98, which set a minimum number of instructional minutes, ranging from three hours a day for kindergarteners, to four hours a day for fourth graders and older. It also called for “daily live interaction” with teachers and classmates.

So this school year, LAUSD teachers are required to provide at least an hour and a half of “synchronous” instruction – meaning they’re interacting live with students – each day. The rest of the “asynchronous” time is supposed to be spent doing independent work or watching pre-recorded lessons.

But Shaw said in her experience, the fall has been inconsistent, too. She said her son’s teacher sometimes experiences internet connectivity problems. At times, her son logs onto Zoom at 9 a.m. and is done by 10 a.m.

She said she’s resorted to printing out math, science, and vocabulary worksheets to keep her son engaged with learning, and she worries for his future – in seventh grade and beyond – if things continue as they are.

“For him to already have struggled before, I feel like this will be a step into him really not wanting to further his education,” Shaw said. “And with that can come so many other problems.”

Vicenta Martinez said she and her husband provided most of the instruction for her daughter, a second-grader. We’re not naming her daughter to protect her privacy as a minor.

“We’re not teachers,” Martinez said in Spanish. “We don’t really know the material that my daughter should be learning and we’re concerned that we won’t be able to help her.”

Martinez said before the pandemic her daughter was very motivated to do well in school, and had dreams of becoming an astronaut when she grows up. But Martinez says she’s noticed a change.

Martinez said she believes her daughter should have more time interacting with her teachers online, and that her school should have ways to support parents like her, who speak Spanish.

“All of the material that they send out is an English and I’ve called and asked my school questions, and they tell me that they don’t speak Spanish,” Martinez said.

The parents suing the district were brought together by two advocacy organizations – Innovate Public Schools and Parent Revolution.

“Before, when you weren’t getting your needs met at school, you could march down to the school … and see what’s happening to your kid in their class … you could stand in the office and refuse to leave until you were heard or your problem was addressed,” explained Gravette.

“But there’s nothing that parents can do now” – with school campuses closed to students – “if a teacher or a principal chooses not to respond,” Gravette added.

The lawyers and plaintiffs are scheduled to hold a press conference at 2 p.m. today in downtown Los Angeles. According to the organizers, it will be livestreamed on the Worth More LA Facebook account.

We have reached out to LAUSD for comment, and will update this story as we learn more.

FOR MORE OF OUR COVERAGE OF LAUSD AND DISTANCE LEARNING: