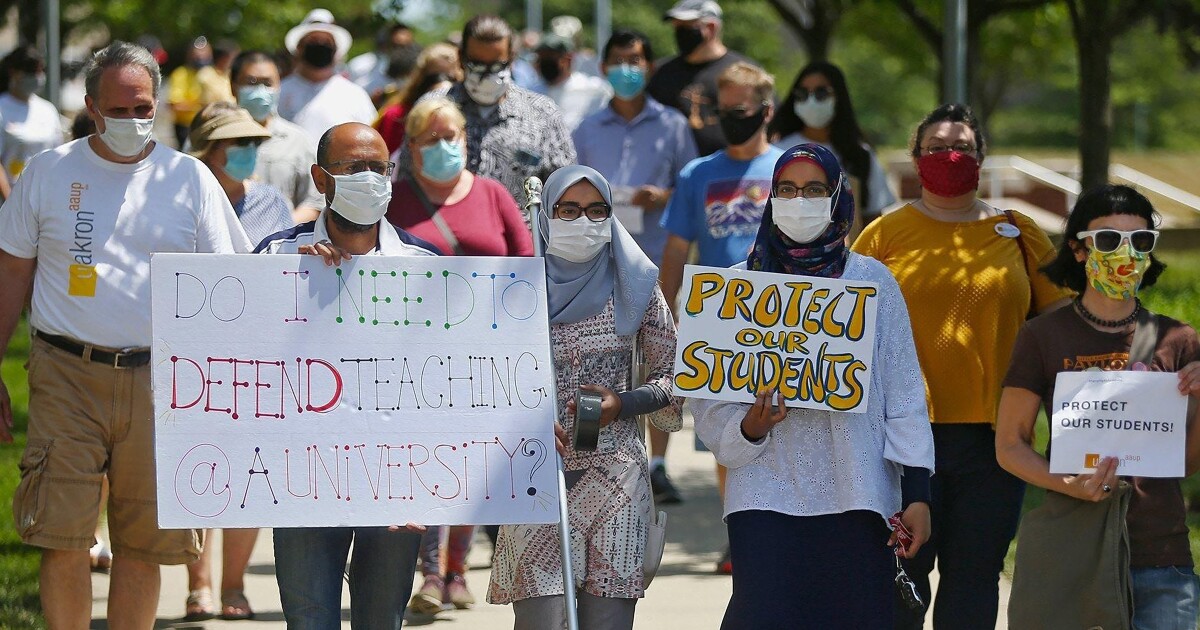 James Slowiak is just one of those 337,000 workers. The former tenured theater professor at the University of Akron said he surrendered to an early retirement this summer after he and others in his department became the targets of institution-wide austerity measures. The termination of Slowiak and other faculty members will allow Akron to permanently cut at least $44 million from its budget. But the future for Akron’s theater program remains unclear. The university told the Akron Beacon Journal in July that the program, with its “uneven or low enrollment,” would undergo a review this fall.

Slowiak’s abrupt termination resulted in whiplash elsewhere in his life. He and his spouse are in the process of selling their home of 10 years as the couple looks for somewhere to live that matches their new incomes. Slowiak’s elderly mother also had to move from Akron to South Bend, Ind., to live near her other son whose home and financial situation is less precarious than Slowiak’s.

Slowiak said all academics should appreciate that protections like seniority and tenure are not absolute. At Akron, it was the invocation of force majeure by the administration that ultimately resulted in the suspension of such protections for faculty members like Slowiak. An arbitrator would eventually uphold that declaration, finding that the coronavirus outbreak was sufficiently catastrophic to justify the invocation of force majeure by the institution.

“You can’t depend on tenure to save you. At the University of Akron, both of those things — service and tenure — were thrown out the window,” Slowiak said.

In retrospect, Adrianna Kezar, a professor and director of the Pullias Center for Higher Education at the University of Southern California, said these new federal figures may suggest institutions were too eager at the start of the pandemic to cull their work forces. Available anecdotes do not suggest an intense cratering of enrollments industry-wide, though auxiliary revenues at many institutions have collapsed.

“It seems to suggest that leaders may have jumped the gun, sending their staffs to plan for the worst. Of course that’s the safe thing to do,” Kezar said. “Yet, I felt as if they moved to that strategy quite quickly, and without waiting for some more data and signals.”

The worst month for job losses in higher education was recorded in May 2020, when the bureau estimated that 457,000 fewer people were employed in the sector relative to February. At that point, higher ed’s estimated work force had been reduced by 9.81 percent since February.

Wendy Simonds, a professor of sociology and founding member of the United Campus Workers of Georgia chapter at Georgia State University, said membership in the organization has grown substantially since the outbreak of coronavirus and the controversial response to it by administrators within the university system.

“People have become very aware that their jobs are insecure, in a way that they didn’t feel insecure before this,” Simonds said.

It’s impossible to know yet which classes of employees in higher education have been or will be most affected by job losses.

Many colleges have moved to eliminate certain sports programs, like swimming and tennis. Other universities and colleges have cut traditional liberal-arts programs such as language studies and sociology.

Furloughs, layoffs, and contract nonrenewals continue to make the careers of adjuncts and contingent faculty members as perilous as ever. Even the job stability associated with tenure-track and tenured faculty members has been threatened as some institutions, like the University of Akron, invoke clauses within faculty contracts that supersede those protections.

While the industry in the coming months and years may recover the number of jobs it has lost, some of the types of jobs that have vanished are unlikely to return.

Higher education’s historic shedding of employees this year has mirrored historic losses on the national-level and across nearly all industries. An analysis by The Washington Post suggests this pandemic-inspired economic crisis may be the most unequal in modern history. The Post’s analysis of a monthly survey of 60,000 households also found job losses brought on by the pandemic “overwhelmingly affected low-wage, minority workers most.”

“Black women, Black men, and mothers of school-age children are taking the longest time to regain their employment,” The Post concluded.

Furthermore, none of these sources of information will be able to fully articulate the many employees who lost their jobs because of the scaled-back operations of third-party companies, which are traditionally contracted by universities and colleges to, for instance, prepare food and clean facilities for a fully operational campus.

The Chronicle’s analysis relies on Current Employment Statistics program data from the U.S. Bureau of Labor Statistics. All estimates are derived from seasonal adjustment calculations.

Work-force estimates associated with August 2020 and September 2020 are preliminary in nature. The Bureau of Labor Statistics may update those estimates in the coming months.