The Grizzlies held a drive-thru event Saturday and encouraged fans to register to vote, fill out census forms and get informed on candidates

Taylor Jenkins often talked about the importance of voting while the Grizzlies were inside the NBA’s bubble. On Saturday, Jenkins helped take that message further.

The Grizzlies coach greeted fans, handed out T-shirts for fans and briefly carried a “Vote” sign with volunteers outside FedExForum for the team’s voter education drive. The drive-thru event also gave fans a chance to fill out census forms.

It was the latest step of the team’s #GrizzVotes campaign that’s encouraging fans to not just vote but be aware who they’re voting for, vote early or on Nov. 3 and volunteer as a poll worker.

“We’re starting to get people coming in and getting engaged and that what the whole point of this event is,” Jenkins said. “There’s more to come and hopefully we have a great election season and everyone can get really excited about it.” 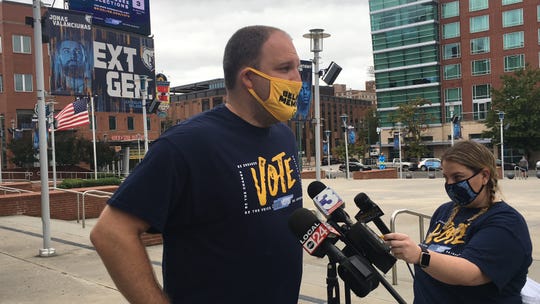 Jenkins and Jaren Jackson Jr. have been the most active Grizzlies helping push the campaign. Both made statements during the team’s virtual voting seminar earlier last month.

Although Jackson wasn’t present Saturday, his voice was heard as he taped a pre-recorded message that played on the plaza as fans drove up.

The 21-year-old forward is also one of the faces of “Hoopers Vote”, an initiative that began Thursday with NBA and WNBA players serving as ambassadors to make sure people are registered. Jackson also had “Vote” on his jersey inside the NBA’s bubble in Florida. 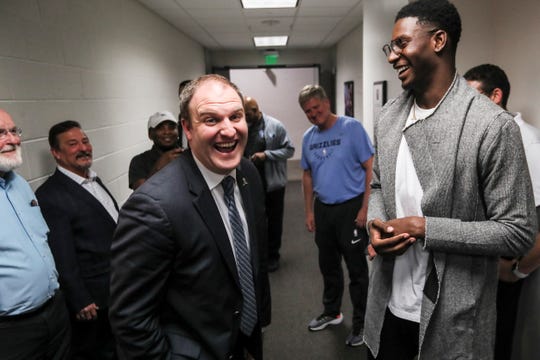 “There’s a passion behind it. It’s all about education (and) awareness and just being a part of the change that we’re all asking for,” Jenkins said. “You know that he’s making a difference and that leadership hopefully inspires a lot of people to make changes as well.”

It’s been a quiet offseason for the Grizzlies with the draft being pushed to Nov. 18 and the team only having a second round pick. NBA commissioner Adam Silver also said this past week the next NBA season wouldn’t start until 2021.

Jenkins said some players have come in for voluntary workouts while others, like Ja Morant, are training elsewhere. He was also thrilled both Morant and Brandon Clarke were named to the All-Rookie first team while Morant finished one vote shy of being a unanimous Rookie of the Year selection.

“Those guys recognize the accomplishment that they made just in their first year and the sky’s the limit for both of them individually,” Jenkins said. “But you know what’s driving them each  and every day….is what they can to help this team take that next step.”

Want to stay informed on the latest Memphis sports news? A Commercial Appeal subscription gets you unlimited access to the best inside information and updates on local sports, and the ability to tap into sports news from throughout the USA TODAY Network’s 109 local sites.