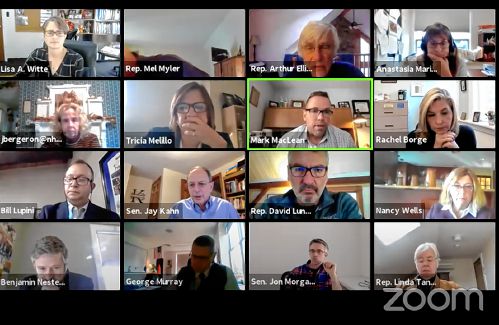 New Hampshire superintendents told lawmakers they have concerns about upcoming school vacations and “academic slide,” at the same time citing criticism they have received from their communities over decisions related to COVID-19.

Five superintendents, representing different regions of the state, met with the Joint House and Senate Education Committee Wednesday via Zoom webinar to discuss their successes and concerns around COVID-19. The hearing was part of a four-hour session, where the committee also heard from area principals, school nurses and special educators.

Several superintendents mentioned concern over upcoming Thanksgiving and winter breaks, and the impact it could have if students or employees choose to travel out of state. New Hampshire requires everyone traveling into the state from non-New England states to self-quarantine for two weeks after arrival.

Many districts are facing staff shortages for in-person learning, which becomes an issue when employees are required to quarantine.

“We are stuck in a position with our employees and our families to be able to answer to that, when they ask questions such as ‘why can I travel to Rhode Island or to Boston but I can’t travel to upstate New York?” said Mark MacLean, superintendent of Merrimack Valley School District. “We have folks telling us they haven’t seen their parents for example, since last March and there is definitely a sentiment out there that people really want to be able to connect with family, especially with the upcoming holiday season upon us.”

Bill Lupini, superintendent of SAU 21 in Hampton and Seabrook, said in just the amount of time as the Zoom webinar, he had received two phone messages about parents who are concerned about how the travel restrictions will impact returning to school after Thanksgiving.

Some superintendents also expressed concern that COVID-19 changes to learning are setting students back academically.

“Having the remote over last spring, plus the summer, plus having another unique year, there is definitely a ‘slide’ in academics,” said John Goldhardt, superintendent of Manchester schools.  “Those of us who are in districts that have high numbers of students who are high-poverty, high-risk, their academic needs are not where they should be.”

District leaders said they are being criticized by their communities for inconsistency and indecision around their learning models.

“Families want kids in school full-time in person,” said Marion Anastasia, superintendent of White Mountains Regional School District. “Some parents don’t understand why some of us can’t have the children back in school full-time when other schools in the region can. There is a lot of public criticism both for and against our models.”

Goldhardt said community conflict that arose over redesigning his district’s learning model has been putting stress on his employees.

“The closer we got to September, the more cantankerous and political the process became,” Goldhardt said.  “This has put a great deal of strain on many people and the mental, physical and emotional drain on individuals has been difficult, to say the least.”

The guidance issued from New Hampshire’s Department of Education in August emphasized local control, leaving much of the decision-making around COVID-19 planning up to individual districts. But on Wednesday, some superintendents said more support would have been helpful in making consistent decisions, like whether to make athletics in-person while school is remote.

Witte, whose district confirmed its first case of COVID-19 Monday, said more guidance from the state would have been helpful for knowing how and when to switch between models.

“A lot of districts, ours included, created decision matrices, doing research on our own using the best information we could find,” Witte said. “It was after most districts had operationalized their plans that clear guidance was issued from the state about switching models.”

In a discussion after the presentations, state representative Mel Myler said some legislators need to meet with the Department of Education to talk through some of the concerns raised during the webinar.

State senator and committee chair Jay Kahn, who moderated the hearing, said this was the last session of public presentations that will take place for the joint education committee before the end of the year.

“Clearly we are making progress in a lot of different ways under a lot of different modalities,” Kahn said. “The challenges are ahead, they’re more than just funding but it is striking to hear repeated concerns about how school districts are going to meet the  demands that are on them for  the remainder of the year.”