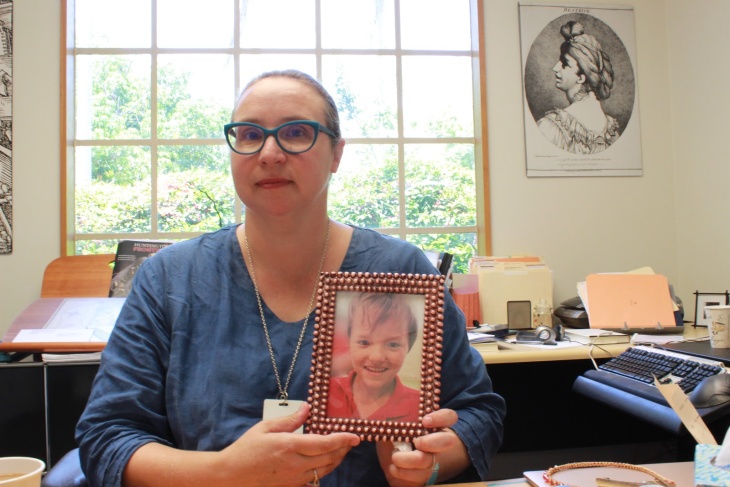 What’s at stake for Southern California in the 2020 Census? Billions of dollars in federal funding for programs like Medi-Cal, for public education, even disaster planning. Political representation in Sacramento and D.C. A census undercount could cut critical resources in L.A. County, home to the largest hard-to-count population in the nation.

In the 2018-19 school year, 14% of all public school students received special education services. Since 1975, the Individuals with Disabilities Education Act (IDEA) has required the availability of free education and related services which address the individual needs of children and youth with a disability. Census-informed data is used to allocate federal dollars to ensure special education is properly funded.

Sara Austin is a local parent “intimately” familiar with the importance of education and services for kids with special needs. She grew up with a sister who struggled developmentally. Today, Austin has a 12-year-old (who she asked LAist not to name for privacy reasons) son with autism. Diagnosed shortly after turning 2, her son is one of the more than 7 million students in the U.S. benefiting from special education services, as reported by the National Center for Education Statistics. Federal special education provides services to students experiencing a range of disabilities including:

WHERE DOES SPECIAL EDUCATION FUNDING COME FROM?

In California, 718,000 students are eligible for special education. The state Legislative Analyst’s Office estimates that educating students with disabilities costs on average more than twice as much as educating general education students. California’s special education programming costs about $12 billion in federal, state and local funding annually, according to a 2016 Public Policy Institute of California report. Federal funding, which relies on census data to determine how the money is allocated, makes up just 9% of the necessary total funding. That may not sound like much but in fiscal year 2015, California received $1.2 billion in special education grants through IDEA legislation.

IF CALIFORNIA IS UNDERCOUNTED, CHILDREN WITH DISABILITIES WILL LOSE ACCESS TO VALUABLE RESOURCES

State and federal funding may not make up the lion’s share of the special education budget, but without it, existing disparities would only be exacerbated. Because district funding — more than 60% of what’s needed, PPIC reported — is determined by property tax revenue, schools in low-income areas have fewer resources for students with disabilities from the start.

“The difference between living in East L.A. versus living in San Marino is doubtless hundreds of dollars per child in terms of the kind of resources they have available to them,” Austin said. “The federal funding for special education helps to ensure that children with special needs across districts — and socioeconomic lines — have resources.”

If an undercount solidifies these gaps long term, a world without reliable special education funding might make it only accessible to affluent families.

“You’d be in the situation where wealthy parents would be able to buy a good education for their children and not-wealthy parents probably would not,” Austin said. “And they would be in a much worse situation. I think that would be very tough.”

Caitlin Hernandez and Dana Amihere also contributed to this story.