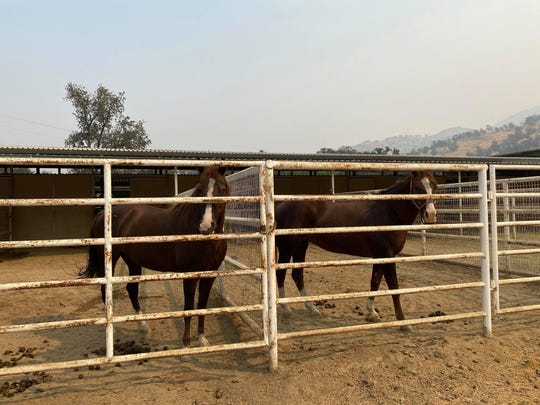 Horses owned by the Fleeman family were temporarily re-located to a friend’s ranch during the SQF Complex Fire. (Photo: Courtesy of Kacie Fleeman)

Jayme Fleeman and her family evacuated from their 2-and-a-half-acre farm in the mountain town of Three Rivers last week.

There wouldn’t be much time to oversee the distance education of her 10-year-old granddaughter, Faith.

The family immediately packed up their RV and traveled nearly 3 miles away to the relative safety of a friend’s ranch, where they and their four cats, eight goats, nine dogs and 10 horses have been ever since. 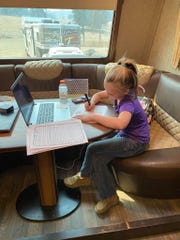 Wildfires burning throughout California have become another threat to children’s education, which continues to be challenged by the coronavirus pandemic. There are nearly 8,000 fire incidents that have burned more than 3.6 million acres in the state, according to the California Department of Forestry and Fire Protection.

The SQF Complex Fire, which has scorched the Central Valley since August, has burned more than 140,000 acres as of Tuesday afternoon and has forced many families to leave their homes, especially those living in rural communities with one exit in and out — as was the case for the Fleeman family.

Amid declining air quality caused by smoke and ash, the Fleemans have worked to keep up with their normal outdoor routine while maintaining Faith’s online education, but it hasn’t been easy.

“It has been a logistical nightmare,” Fleeman said. “We are busy here trying to take care of all these animals and displaced animals. It takes everyone in that effort in addition to trying to get her schoolwork done.”

“I have anxiety trying to balance everything,” she added. “If she slips behind, it’s even harder for her to make things up without physical contact or being in a classroom.” 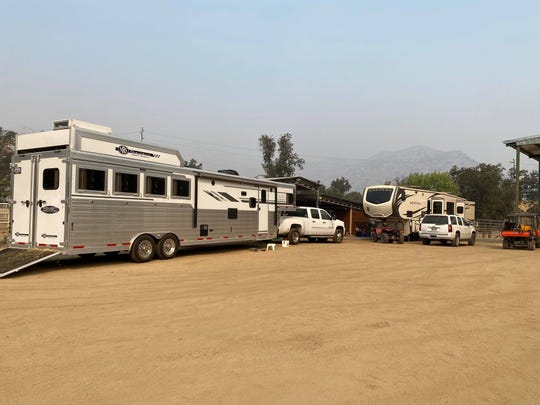 The Fleeman family packed up their RV and safely landed at a friend’s ranch after evacuating from the SQF Complex Fire. (Photo: Courtesy of Kacie Fleeman)

Online learning during a pandemic and wildfire

“It’s hard enough with COVID and this whole distance learning thing and then you add another disaster on top of it,” Fleeman said. “It’s pretty overwhelming.”

Faith had gotten five weeks of online learning under her belt before the wildfire caught Fleeman and other families off guard. It was reminiscent of March when many California schools closed to in-person instruction.

“We were kind of on our own,” Fleeman said. “The teachers were accessible. We could call and stuff, but there were no Facetime meetings. But they are doing Zoom now.”

Parents and guardians have had to play a large role in their children’s education since the pandemic was detected in the area, according to Susan Sherwood, principal at Three Rivers Union Elementary School and superintendent for the school district.

Teachers help, but they can only do so much over a computer, added Sherwood, who wanted to ease some of the burden on staff and families during the wildfire.

“A lot of families did leave town, and they weren’t logging on,” she added. “I’ll either have to apply for a waiver, which excuses you from those days, or we’ll have to make them up.”

Stress caused by the pandemic and wildfires burning across the state is affecting parents, children and teachers, according to Sherwood. 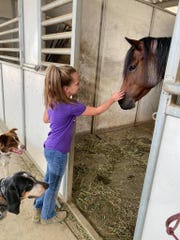 “One of my big concerns is for the children,” she said. “As adults, we know when we’re stressed. But children don’t really understand it. They act out and do things not normally in their nature.”

Last school year, Sherwood saw how it affected her students when several school trips were canceled, and 8th-grade graduation was delayed to July and revamped for social distancing.

“It was not the entrance to high school they expected,” Sherwood said.

The SQF Complex Fire has also been unexpected for Sherwood, who has never before dealt with the challenges of a wildfire while working as an administrator, she said.

“Right now — new teachers are entering the field, and there are interns. This is a horrible way to enter,” Sherwood said. “Teachers are working hard to provide for kids, and they are very committed.”