Newly appointed Kentucky Education Commissioner Jason Glass talks about his plans for schools in the state as well as the JCPS audit.

FRANKFORT — Jason Glass picked quite a time to return to his home state and begin his new job as Kentucky’s education commissioner.

Overseeing the Bluegrass State’s K-12 public school system — with about 650,000 students and 42,000 teachers — during a pandemic is no small task.

But Glass said Friday he’s prepared and ready to tackle that challenge.

Before beginning his new role, the Brandenburg native and third-generation educator had served as the leader of Jeffco Public Schoolsin the metro Denver area since 2017.

That district, like countless others around the U.S., quickly pivoted to remote learning in the spring at the onset of the COVID-19 crisis, before slowly welcoming back students to in-person learning this month, Glass said.

“It’s been a good first week,” he said Friday during an interview with The Courier Journal at the Kentucky Department of Education offices in Frankfort. “And I knew what I was taking on.

“A lot of the same challenges and decisions that we were making at Jeffco are the same challenges and decisions that the state Department of Education and the school districts are having to make here,” he continued. “The challenge that COVID presents isn’t unique to Kentucky, and so in some ways, that’s a benefit in that you can learn lessons from other systems and really other countries about how they’ve been successful at reopening.”

The state school board chose Glass, 49, in July to lead the Kentucky Department of Education following a national search.

Background: Colorado superintendent to be next Kentucky education commissioner

He took over for Kevin Brown, the general counsel for Jefferson County Public Schools in Louisville, who served as interim commissioner while the state education board searched for a permanent chief.

His 25 years in education have included time as a teacher, superintendent and director of Iowa’s K-12 system.

Glass, a father of two kids who attend public schools, spoke Friday with The Courier Journal about a range of issues related to education in Kentucky during the time of COVID-19.

Here’s some of what he had to say:

How does it feel to be home?

“It’s been an incredible honor to come back to the state that I grew up in and gave so much to me. (I come from) a family that’s worked in education, so we got relationships and connections and lots of folks I can talk to about that … When I took over the same job in Iowa, I didn’t know hardly anybody in the state. It’s a tremendous advantage here to have those relationships and be able to talk to people that I know and trust. 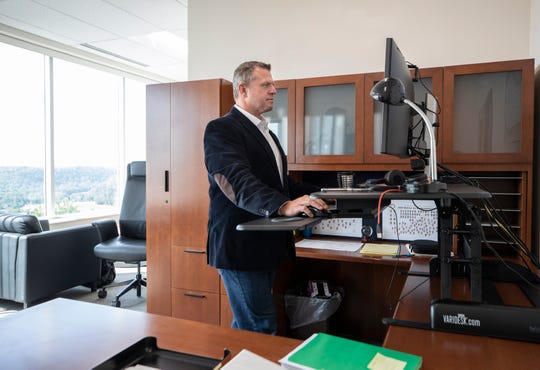 “At the same time, coming into the state (during the pandemic) has been a challenge for sure. We live in Fayette County, in the Lexington area. All the stuff we had hoped and were excited about getting able to do coming back to the state, going to UK games and Keeneland and restaurants that we knew and loved and visiting family … we haven’t been able to do those sorts of things, so it has been surreal … It also reminds you of how much we’re sacrificing in this time to keep people safe.”

Are there any initiatives you’d like to work on right away?

“My focus really was in supporting the work that was underway. I always think it’s unwise to come in and start making big moves and big decisions when you’re coming into a new place. You don’t really understand the context of the decisions that have been made before you arrived. I always found it prudent to slow down and move more slowly up front so that you can make more impactful and smart moves later.

“I’m trying to continue to work around supporting schools with COVID. We’ve got budget challenges at the state level and thinking about how can we do our best to shield student experiences, school districts from that.

“I’ve also been really focused on outreach and building relationships … so talking with people who are education leaders and practitioners in the state (and) students and their experiences so there is a deep understanding before you start moving anything around. It is a priority for me in this first phase for these first couple of months.

“What we’ve been doing is just continuing the structure that interim commissioner Brown had in place. I don’t want to go moving things around on people. I think right now what the department needs and what the state needs is stability.”

Do you support the new COVID-19 dashboard and reporting system for schools?

Last Monday, state officials unveiled a new dashboard and color-coded metrics for schools to use when reporting COVID-19 cases and evaluating whether to hold in-person classes or remote learning.

“I think Dr. Stack (Kentucky’s public health commissioner) and the governor’s office were responding to requests for that system. … I appreciate them doing the work on that and putting it out. …The why behind that is to have accurate, timely and transparent data for communities as they make decisions and parents make decisions on what’s best for their kid.

“That’s a big lift. It’s a brand new data system, brand new data entry requirement for schools, and so we’ll continue to work with (the Department of Public Health) on communicating that requirement to school districts. …There may be some challenges and hiccups as we get this going, but ultimately I think it will be a positive addition for decision-making in the state.”

Do you expect challenges with the state budget and education funding?

“Absolutely. Both in the current year, and then going forward into the next budget year and 2021-22 school year, we’re not sure what the magnitude of those reductions are going to be right now, but they come on the backs of years of lean funding or reductions in Kentucky, both in the Department of Education and in school districts.

“The cupboard has already been raided and is bare, so that makes it even more difficult when these cuts come down. The priority is always to try and protect the experiences and services that students get directly and also to try and protect the jobs of employees and educators in the state, so we’ll see if the magnitude of the cuts allows us to protect those two things. But sometimes, if they are large, you may have to scale back services that are available to students, and people may lose pay and may lose jobs.”

When could the next JCPS audit begin?

Glass will oversee a second audit of Jefferson County Public Schools this fall and will recommend whether Kentucky’s largest district needs to be taken over by the state after two years under a corrective plan.

“I believe it starts (this) week, and then there will be a lengthy process and a lot of conversations between department staff and JCPS staff, really looking at the challenges that led to the state becoming involved with JCPS.

“Now we’re checking to see how much progress has been made around those improvements. I think over the long term, we want to get to a place where Jefferson County Public Schools is flying on its own, (and) the decisions and oversight are coming from their community and local school board.

“I’ve been really impressed with (JCPS Superintendent Marty) Pollio and the work that he’s done. I think he’s a quality education leader, and he’s put in place a competent leadership team in the district, and I know that they are working hard to make progress.

“We’re going to have to validate that progress has been made, but I’m not a believer that the state Department of Education needs to have a long-term in presence in schools or be micromanaging local school decisions. I think there are states that have done that, and you end up with a state department running a school district for decades. That’s not something that I want to get us into, but there are cases where the department needs to step in and see that some correction has taken place, and that’s what I think is happening with Jefferson County Public Schools.”

How do you view state testing for students in the spring?

“We’ve received notification from Education Secretary (Betsy) DeVos and the U.S. Department of Education that we should not expect flexibility for the spring, so she really told us that we needed to think about how we restore testing in some form. Now that may be challenging because we may still be living in a pandemic world at that point. We’re going to work to figure out how we do that testing may look different. It may be more limited than it was in the past. 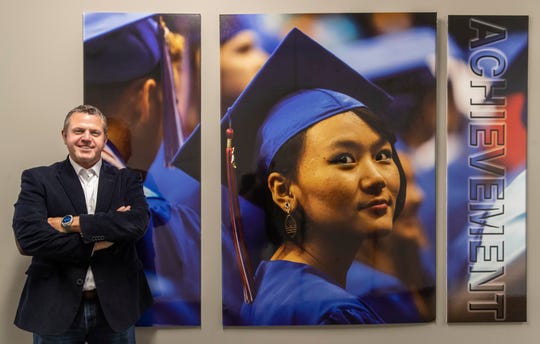 “We can also use the disruption of the pandemic to think about: Can we do testing in a better and different way or in a less intrusive and time consuming way? Or could we get results back faster in a way with better informed instruction?”

What long-term goals do you have?

“Supporting the anti-racism and the equity work that the department has underway. … We really won’t be an excellent state in education until we are excellent for everybody and that all of our kids, Black and brown kids especially, have the opportunity to access a great education and are succeeding. That will be a focus in this first year.

“Also supporting and managing the department and school districts in what may be budget shocks or shortfalls … I think looking at this first year, a lot of work on managing COVID, relationship building, work around advancing anti-racism and equity as a focus (and) supporting districts through potential budget cuts.

“Looking even longer term, I want us to get to a place in the state where we can have a statewide conversation around the future of education, where we’re not so focused on some of the short term crises that we’re managing right now, but instead thinking about what school could be for the commonwealth. What are the experiences that kids need to have so that they are successful 10, 25, 50 years in the future? What are the skills they are going to need to be successful and have fulfilling lives, and how do we build an education system that prepares them for that?

“That’s an exciting conversation. I don’t think we’re ready to have that right now because we are just taking it one day at a time or one hour at a time sometimes, but I do think that aspirational conversation is in our future, and I’m excited about getting to that.”