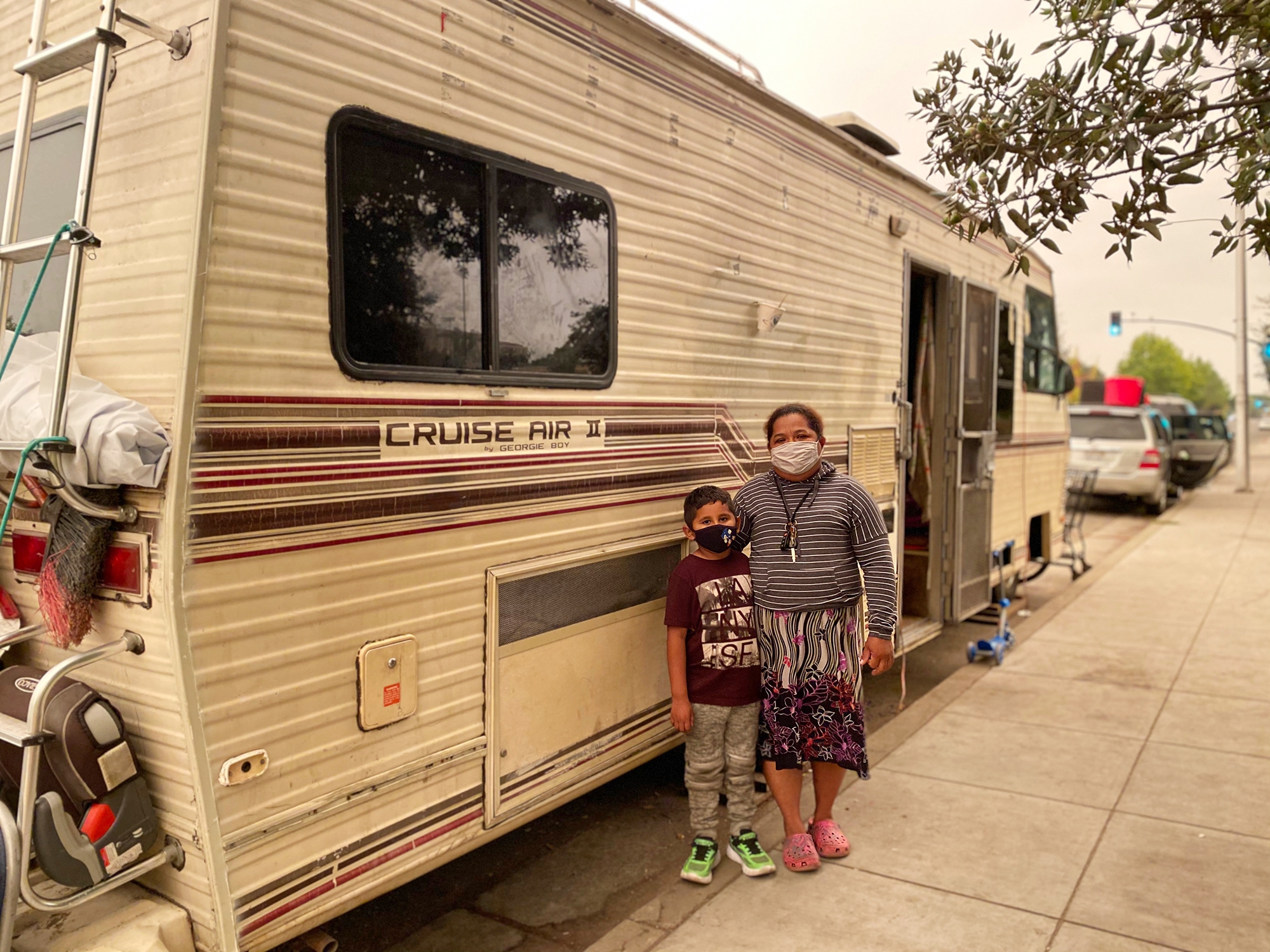 When the new school year started, the four Solorio siblings — a kindergartner, sixth-grader, eighth-grader and high school sophomore — sat in a circle in their family’s cramped RV, parked on El Camino Real across the street from the Palo Alto school district’s office, and tried to focus on online school.

But with four computers sharing one hot spot, all of which were provided to the family by the district, the internet connection often slowed or disconnected, and they were unable to finish classes. Their mother, Noemi Solorio, doesn’t speak much English but would do her best to make sure her kids were focused and engaged, especially her youngest one, who’s never attended school before.

When buses drive by on El Camino Real, the RV shakes. Without electricity, charged computer and cellphone batteries are precious commodities. The family parks in one place as long as they can before a police officer inevitably shows up and leaves them a tow warning notice that gives them 72 hours to move the RV a half mile away or face an expensive citation.

The children in the Solorio family are among a small number of homeless students in Palo Alto Unified — 23, according to the district — whose living situations bring to light deep inequities at play with distance learning. When staff heard two weeks ago of students in RVs who were struggling to access the internet consistently, even with the district-provided hot spots, they installed wireless access points outside the district office and pointed them toward the motor homes on El Camino Real.

“There are people that need help and they need help in ways most people would be unaware exist in Palo Alto,” Superintendent Don Austin said.

The Solorio family lived in San Jose before arriving in Palo Alto in February, just before the start of the pandemic, Noemi Solorio said in an interview conducted in Spanish. She was working in the food industry at the time. She worked in the afternoons while her husband worked in the mornings so at least one parent could be home with their children throughout the day.

Then shelter in place took effect. Her husband got laid off and her hours were cut. She later lost her job, but her husband found work again. They don’t own the RV that’s become their home but instead pay $700 a month in rent to the owner. She said those early months of the shutdown were “chaos” without the escape of a trip to the park or McDonald’s.

Solorio’s full-time job is now sitting with her youngest son, Jeremy, while he’s on Zoom for school from 8 to 11:30 a.m. He didn’t attend preschool, so he hasn’t had any exposure to school and is having trouble adjusting, particularly with everything happening online. He’s 5 years old and easily distracted — by his siblings, by his hunger, by wanting to kiss and hug his mother.

She’s worried that he’s falling behind his classmates and that the teacher is progressing to concepts he doesn’t understand.

“They’re starting to want them to do sentences of two to three words, but how is he supposed to do that if he doesn’t know the consonants or letters or sounds? How can the teacher want him to focus on entire words that he does not know?” she asked.

Solorio said it’s been frustrating to see some of her children get marked absent or penalized when they lose their internet connection and miss class. She said she wishes there was more flexibility and communication with the teachers about their living situation. (She also asked for more compassion from the city about people living in RVs, who she feels are painted with an unfairly broad brush.)

The mother of four compared the foundation laid at the start of a new school year — and with Jeremy, the start of his K-12 education — to starting the day with a good breakfast. Without one, you’re not as well set up for success, she said.

“If you start the day badly, it will end badly,” she said. “It does worry me.”

Last week, Solorio’s two older children, who are 13 and 15 years old, returned to school in person for the first time since March as part of the district’s new PAUSD+ program for high-need students. She had mixed feelings about them going.

“I’m happy but nervous. I’m happy because due to the situation I’m living in, they were not doing all of their classes completely. It’s not a problem with them. It’s a problem with the power” and not being able to charge their computers, she said. “But I’m nervous because I know the coronavirus is something serious.”

As a mother, she said she’d prefer to keep her children home with her where she knows they’re safe and can limit their exposure to the coronavirus. When her husband comes home from work, he disinfects as much as possible and leaves his shoes outside the RV.

They can’t help but feel inadequate as parents, Solorio said, and are “fighting” to find a stable home to move into. Last week, the district told them they’d get a second hot spot, a request that takes about a week to process, though the district is prioritizing homeless students.

“We feel like bad parents. We want a good roof above our heads,” she said. “But at the same time I thank God because I still have a roof for them and they’re healthy.”

The school district has paused plans to open PAUSD+ programs at all of the elementary schools given the district hopes to start to fully reopen schools in mid-October. Knowing, however, that there are still young students who need a supportive place to learn, the district is opening a pilot version of PAUSD+ at Addison Elementary School this Monday, Sept. 21. The program will serve no more than 14 kindergarten through fifth grade students from Addison, Walter Hayes and Duveneck elementary schools.

The district has reached out to parents of struggling elementary students and in particular ones who haven’t been attending online classes, Lana Conaway, assistant superintendent of Equity and Student Affairs, said. She said at least two elementary students who live in RVs have signed up for the program.

“The objective is to get them in a place where there’s reliable internet … and to make sure there’s someone who can be that additional person to ask questions of and making sure they’re engaged and know(ing) where they need to go next,” Conaway said.

Find comprehensive coverage on the Midpeninsula’s response to the new coronavirus by Palo Alto Online, the Mountain View Voice and the Almanac here.