Three tortoises slowly mill about their 3,000-square-foot enclosure along side of a home where they munch on edible orchid, hibiscus and cactus plants at Adam’s Animal Encounters.

Almost 4 acres on Pine Island is a refuge for 80 reptiles representing 39 species who are cared for by a man who has a passion for animals and educating others to grow an appreciation for them.

The property, on a lake, is where Adam Pottruck and his wife Lauren live, surrounded by tortoise enclosures, man-made ponds, edible plants and land to expand their rescue.

Some of the 80 animals include tortoises, turtles, snakes, geckos, bearded dragons, alligators, a tegu and even a black widow spider he found on his boat. 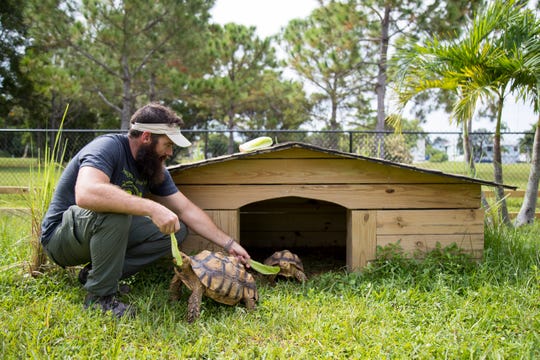 Adam Pottruck feeds two of his tortoises some romaine as a treat on Wednesday, September 10, 2020, at his home on Pine Island. (Photo: Amanda Inscore/The News-Press USA TODAY NETWORK – FLORIDA)

Adam’s Animal Encounters began two and a half years ago. Pottruck takes in mostly surrendered pets, cares for them and uses them to educate others in hopes that they will love them just as much as he does.

Now that means educating visitors at his home.

Some of the animals arrive with injuries and need rehabilitation.

This isn’t just a hobby for Pottruck, it is a full-time job, 10- to 12-hour days, six days a week. The long hours are worth it, he said, because he loves reptiles and loves spending time with the animals.

His day starts by checking on all of the animals, usually while a snake or lizard is around his neck, to make sure they are alright and to check they didn’t flip over water or food dishes, heat lamps aren’t burnt out and pumps are still running.

Last thing he does at night is make sure the tortoises are inside their homes outside and take in some critters who only stay outside during the day.

While working with the reptiles, Pottruck is caring and treats them almost like children. Speaking to them softly, handling them gently and calling them pet names, like “sweetie.”

A female ball python named Bozo wraps around his arm as he tells visitors facts like how Bozo can eat something one and a half to two times the thickest part of her body. She has extra skin under her head so she can open her jaw larger. 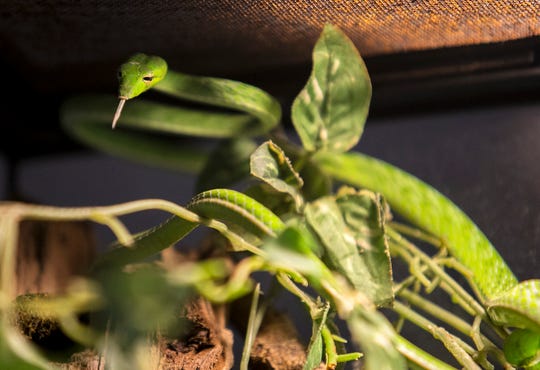 This Asian vine snake is one of many snakes that Adam cares for at his Pine Island home. (Photo: Amanda Inscore/The News-Press USA TODAY NETWORK – FLORIDA)

At the start of Adam’s Animal Encounters he was putting on three to four school programs a week steadily, taking his animals into schools and teaching children about them.

In the first three quarters of last year’s school schedule, Pottruck saw about 3,000 kids in the Lee County school system. Groups of 50 kids at a time would experience rotating stations, smell stations and touch stations – all sorts of things that made his program unique and probably won’t happen anymore due to COVID-19.

“It’s unanimous across the board that up-close experiences out in nature, hands on with animals whatever it is, that’s going to really grow an appreciation,” Pottruck said.

Everything was going well for Pottruck up until this March, when the COVID-19 pandemic closed almost everything down, including schools – his biggest clientele.

Instead of being defeated, he got creative.

Adam’s Animal Encounters now does private tours for groups of six or fewer and a drive-in style encounter.

Held in his driveway, lined with signs with fun animal facts, people stay in their cars with their windows up, as he takes out animals one by one. He communicates with you through the radio.

As he places a ball python on the hood of a car he’ll tell the passengers facts like, the ball python and many reptiles have counter shading, lighter colored bellies and darker backs, to help protect them from predators above and below.

Pottruck first went to school for business but realized he didn’t like that too much. He switched to environmental studies.

“I thought research was really cool, to discover something about Earth that no one ever knew before,” he said.

He then got a job as a naturalist for Florida Gulf Coast University, where he led tours. That’s when he realized that not only did he enjoy teaching, but something about him made people listen, and he realized that education was his true calling, Pottruck said.

Before breaking out on his own, he worked as a camp director and then education director at Calusa Nature Center and Planetarium in Fort Myers. He now serves on its board of directors.

Read: Calusa Nature Center needs help, but supporters are determined to find a way to carry on

When he left his education director duties at the nature center, it had stopped taking in new animals. Clients started to call him to see if he would take in animals.

Pottruck agreed, and he realized he had the animals and the experience, so he started Adam’s Amazing Animals in 2013. He said he was younger, not as dedicated and just did it on the side.

“I was a teacher for a little bit, bringing my animals into the classroom. I would always get calls about this reptile or that reptile, all these animals that were being abandoned and didn’t have good homes and I just knew how great they could be inside of a school,” Pottruck said.

He can go to any school in the state and has the contract to do so. His program meets science standards and schools can use their Title One funding since it is so educational, he said.

“I think it really just comes from my love for animals and wanting other people to love animals and teaching them why they are so amazing,” Pottruck said.

The majority of his animals are surrendered pets and Pottruck urges people to really do their research before getting a reptile as a pet.

Not everything on the internet about reptiles is necessarily good for them. For example, just because a reptile can go a certain amount of time without eating doesn’t mean it should go that long in between meals, he said.

“Got to do your research, got to think it through. They are a living being,” Pottruck said. 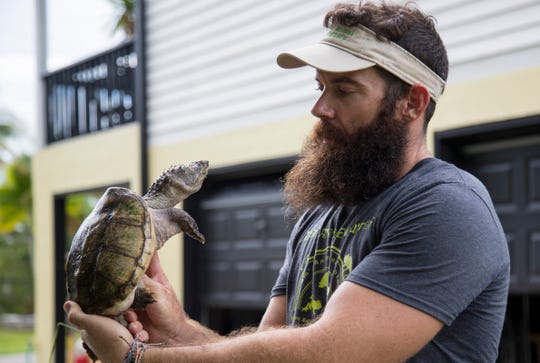 “So every kid can see these animals and have face to face interactions with these animals to build an appreciation, which will ultimately save them,” Pottruck said.

Meet some of the rescues:

Red foot tortoise: Sheldon was a surrendered pet. The previous owners had him for years and then gave him up. He’s a pretty rare sub species called a Cherry Head.

Fun Fact: He has a concave belly, which is how you know he is a male. 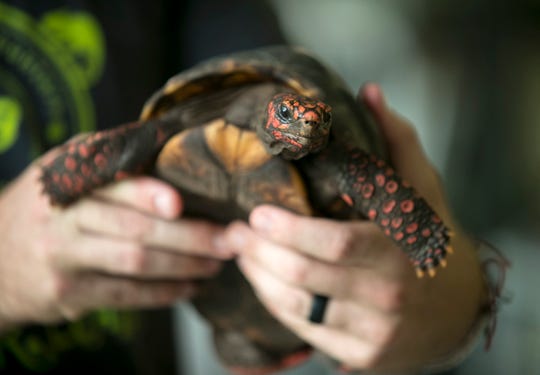 Alligators: He has two named Tick and Tock, and they will grow one foot per year until 5 then after that it’s indeterminate. All reptiles have indeterminate growth, which means they will grow from the day they are born to the day they die. Gators really aren’t hunters, they sensed their food. They also have two sets of eyelids so they can see underwater.

Fun fact: You can tell how big an alligator is by measuring the from their nostrils to the back of their eyes. That length in inches is how big they are in feet. They can run 30 miles an hour, but they will usually only peruse someone a little bit. 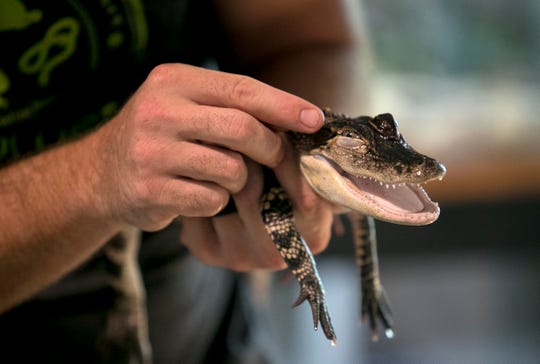 Geckos: Pottruck has quite a few geckos from Pakistan, one named Fiona, another named Curious George. He doesn’t keep them in the same tank because the males will fight and the males will mate with the females. They store all their fat and energy in their tails and if they get stressed they will drop their tails. Geckos are nocturnal and they do not enjoy being picked up or held.

Fun Fact: If geckos are picked up in the wild they have to fight for their life, so when a human goes to pick them up they will try to walk right off you and fight to get away.

Bearded dragons: He has three named Puff, Figment and Gus. All were surrendered pets. Puff and Figment were kept together in their previous home, but males do not get along and will fight. Puff is missing part of his tail and some toes from fighting with Figment. Figment didn’t receive the correct diet and got a bone disease. Part of Gus’ jaw is gone because his former owner cleaned his tank with bleach, but didn’t get all the bleach out. It got in his mouth and ate away at his jaw. Gus’ tank has to be kept extremely clean now because he is prone to bacteria infections. 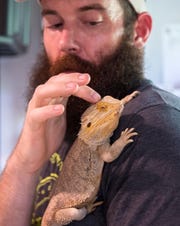 Tortoises: He has three tortoises, one named Tank who was hit by a car. In mid-July, one of Pottruck’s neighbors called him to tell him a tortoise was hit. Pottruck thinks the undercarriage of a car nicked his top scoots and popped them off. He had to clean and treat his wound, and without his shell it is very sensitive. It took Pottruck about six weeks until he was comfortable leaving Tank outside.

Fun Fact: Tortoises can live up to about 150 years, with the oldest tortoise living now about 188.

Tegu: He has a tegu named Bruce, who he had to rehabilitate back to health. When he first got him he had a big wound on his belly. The people who had him before kept him in a wooden enclosure that didn’t allow him to burrow. Tegus are digging animals and Bruce kept pacing his enclosure trying to burrow, but ripped his belly open on the wood. Pottruck had to give him medicine baths every morning, antibiotics in the morning and ointments at night for six months.

Fun Fact: Tegus have a 1,000-pound newton bite force and are super invasive in Florida. 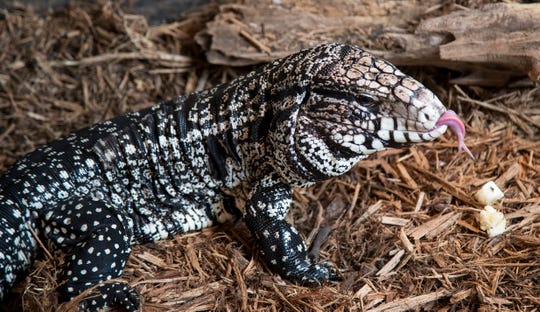 Adam’s tegu eats a banana on Wednesday, September 9, 2020. When he rescued the tegu, it was injured, and he nursed it back to health. (Photo: Amanda Inscore/The News-Press USA TODAY NETWORK – FLORIDA)

What: Adam’s Animal Encounters has private tours and drive-in encounters