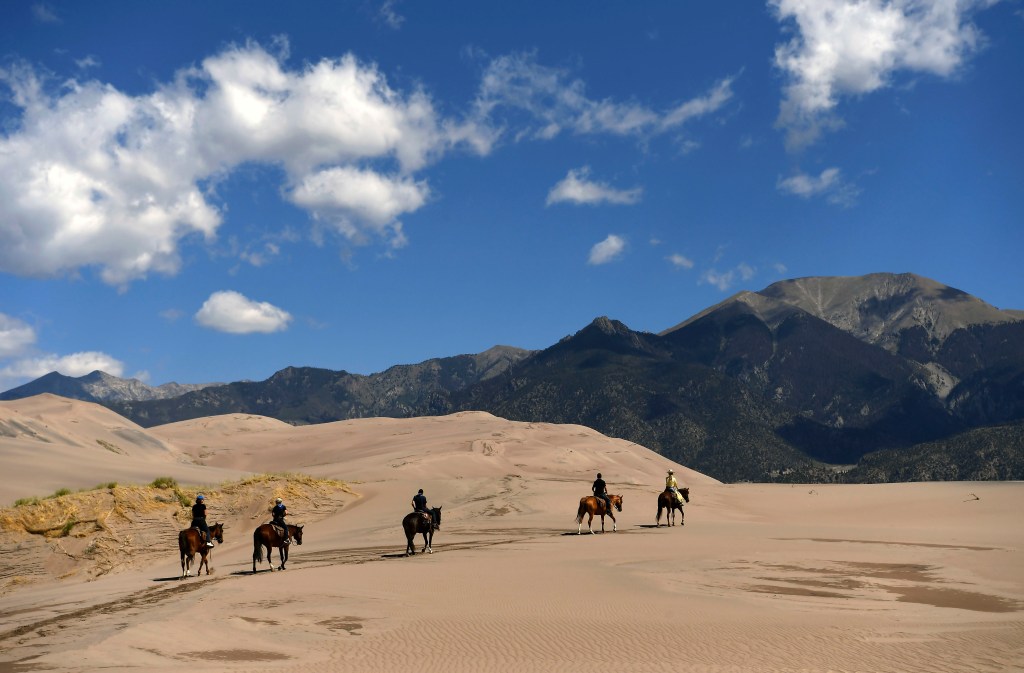 Along with raising cattle and bison on five ranches, Duke Phillips III and his team are raising awareness about ranching as a way of life and a way to conserve the West’s open spaces, wildlife and other natural resources.

Even during the coronavirus pandemic and a statewide drought in Colorado, Ranchlands, the management company founded by Phillips, is still running cattle, running workshops and programs and hosting visitors at the Medano-Zapata Ranch in the San Luis Valley.

Work goes on at the Chico Basin Ranch southeast of Colorado Springs, although it remains closed to most visitors.

The two ranches are among five managed by Ranchlands. The others are in New Mexico, Texas and South Dakota. Altogether, they cover about 300,000 acres and form the foundation of a business that Phillips, his son, Duke Phillips IV, and his daughter, Tess Leach, run with about 20 full-time employees.

Ranchlands operates the Chico Basin Ranch on a 25-year lease from the Colorado State Land Board. Just under 90,000 acres, the area is one of country’s largest uninterrupted stretches of shortgrass and sand-sage prairie left, according to the management company.

There’s a panoramic view of the mountains, including the Sangre De Cristo and Green Horn mountain to the north and west, and the Spanish Peaks farther south. Ranchlands has had an open-gate philosophy, Phillips said, serving as a place where both locals and travelers can take advantage of the various education programs and opportunities to connect with the staff and gain a better understanding of what ranching is all about.

Chuck Dye is fairly new to the Ranchlands staff, starting as at Chico Basin five months ago. For him, it’s all about “doing right by the land,” something that appealed to him about Ranchlands mission.

“My role is to learn, to gain a stronger and more attentive eye in ways livestock can be used sustainably,”  Dye said. “The focus is on the land, and the continued education of younger generations about land management. It’s inspiring.”

The Nature Conservancy owns the 110,000-acre Medano-Zapata Ranch, which is on the eastern edge of the Great Sand National Park and Preserve. Ranchlands runs cattle and bison there, operates a lodge and offers several education and arts programs and ecotourism opportunities.

Ranchlands works in partnership with The Nature Conservancy to offset the costs of running and owning the property while implementing conservation projects.

“We also have hunting and fishing. We have an education program that sees over 2,000 kids a year for day programs” Phillips said. “We have a ranch management leadership school that’s been in existence for 20 years. We’re training young people how to be to be leaders in ranch management.”

While COVID-19 has forced some changes to the way Ranchlands does business, the Zapata ranch began welcoming visitors again in mid-July. Phillips said social distancing and other precautions are being followed.

Leach, head of business development, said the accommodations are at about 80% capacity and are open through Oct. 31.

Ranch guests can go horseback riding, following cattle at the foot of the Sangre de Cristo Mountain. They’re encouraged to go hiking, bird watching, and practice roping cattle. The landscape changes from forests and meadows, alpine lakes and topping out in tundra.

The ranches host concerts by singers and songwriters. Artists and photographers are invited to visit and the ranch managers sponsor an exhibition of their work in Denver.

“Those are platforms or a medium for bringing people together to talk about conservation and ranching because ranching is such a misunderstood way of life,” said Phillips.

Many times, people tend to either romanticize ranching or see it as the mining of the land, he added. He wants the public to understand the business as well as the role he see it playing in furthering conservation.

“In order for ranching to function it has to have open space, open pastures,” Phillips said. “There’s such a need today for that, especially with development and people buying small acreages.”

Wildlife needs open spaces to migrate, nest, breed and give birth. “Animals just don’t do well with a bunch of people around them,” Phillips said.

But to be able to keep working on conservation and to keep the range land open, ranchers have to be able to keep making a living. Ranchlands has worked on diversifying its business through different revenue streams. One of those is its leather-making venture, which produces and sells high-end leather bags, belts and other items.

“It began just from me having a small bag I carried around with me to repair my saddle gear,” Phillips said. “I made a bag for my wife and someone else wanted one. Pretty soon we’re making belts and holsters and things like that.”

Now, the company has a full-on leather crafting business called Ranchlands Mercantile. Phillips said the idea is to use traditional American leather work similar to that of saddle makers. Artisans work in a shop on the Chico Basin Ranch.

Besides the coronavirus, the drought has created challenges this year. Ranchlands will send cattle to auction earlier than normal due to the impacts on the range land.

“It’s just one of those things, it’s just part of ranching,” Phillips said. “It presents problems, but it’s really just part of what you have to do if you’re going to play.”