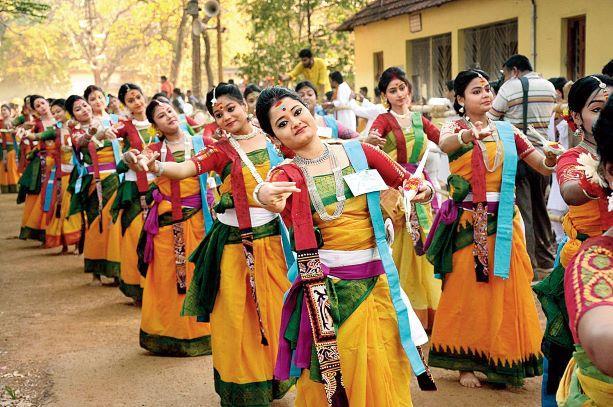 Signalling the beginning of the downfall of Tagore’s ideas, image and traditions was the appointment of Bidyut Chakrabarty, a favourite of the HRD Ministry, as Vice-Chancellor of Visva-Bharati in September 2018. The selection was done despite Chakrabarty being found guilty and convicted of sexual harassment.

In January 2020, when the Vice Chancellor invited a BJP Rajya Sabha member to talk on the controversial Citizenship Amendment Act, students vociferously objected to the subject of the lecture as it was likely to fuel religious animosity. This resulted in the talk being cancelled.

Visva-Bharati decided to sell as scrap the surplus of 9 lakh precious children’s text books like Sahaj Path written by Tagore and illustrated by Nandalal Bose.

Moreover, contrary to Tagore’s concept of inclusiveness, a tall concrete wall started to come up, segregating the university campus from the neighbouring residential colonies.

And, if that was not enough, the University’s Executive Council decided to cancel the century-old iconic spring festival (Basanta Utsav) and winter festival (Poush Mela) amid a chorus of shrill saffron voices demanding deletion of Tagore’s thoughts from text books.

The Vice Chancellor also called Tagore an ‘outsider.’ While he later recanted his words, the damage to Tagore’s vision and mission had already begun.

Recently, the Chief Justice of the Calcutta High Court has remarked that continuing the tradition of the Poush Mela in Shantiniketan this December, may be in conformity with Tagore’s wishes.

While there’s no final decision on the matter yet, one may take solace in this glimmer of hope. 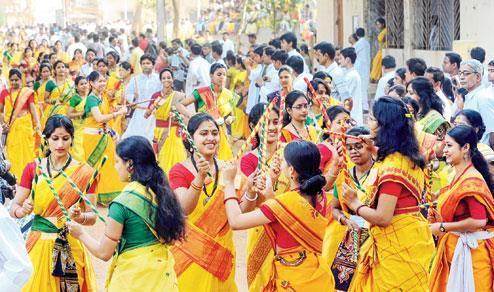 Tagore, the iconic boatman of Visva-Bharati, tall and handsome in his flowing beard and non-Western jobba (a long robe-like attire), conveyed the impression of a “sage-like poet”

And the cargo he carried was partly inherited and partly instinctive.

Tagore inherited the peaceful natural surroundings of Shantiniketan (or an abode of peace), a small town of Bengal from his father Maharishi Debendranath Tagore.

Tagore’s theory of education – which emphasises the unfolding of a child’s personality through social, literary, artistic and sports activities that encourage him to think rather than achieve success through rote learning – was instinctive.

In 1901, Tagore founded his Ashram school at Shantiniketan. From then on, Tagore created and developed his cargo that included his myriad songs, poems, dramas, lectures, the various educational institutions he founded, the cultural interactions and the multi-fold experiences of his extensive travels all over the world, particularly Asia.

The Ashram school was the cornerstone of his educational experiments at Visva-Bharati. It’s unique features were open-air classes under the shade of a tree, personal contact between teachers and students, training in self-governance, and the emphasis on co-curricular activities besides the curriculum of studies.

Nobel laureate Amartya Sen was a student there. In a 2001 article in The New York Review, Sen recalls: “the experience of outdoor schooling (was) extremely attractive and pleasant”, class discussions had “an openness and wide-ranging character” and “the school’s celebration of variety was also in sharp contrast with the cultural conservatism and separation” characteristic of schools/ educational institutions elsewhere in India.

The University has various institutions offering courses in diverse disciplines at various levels.

Arriana Huffington from Greece, who co-founded Huffington Post mentions in an interview, “India has long held a special place in my heart, from the time I went to study comparative religion at Visva-Bharati University.”

The Kala Bhawan or the Institute of Fine Arts is perhaps the leading institute of visual art in India. Its famous faculty included painters Nandalal Bose and Binod Behari Mukhopadhyay, and sculptor Ramkinkar Baij.

Celebrated film-maker Satyajit Ray who spent three years at the Kala Bhavana studying oriental art, considered this as the most fruitful period of his life. “Shantiniketan made me the combined product of East and West that I am,’ said Ray.

Tagore always wanted to bring about a cultural interaction between the different nations of Asia. And he did this successfully through his frequent travels to China, Japan, Sri Lanka, Burma, Singapore, Malaya, Indonesia and Iran where he presented his songs, dances and plays and lectured on myriad subjects.

Tagore was invited to China in 1924 by the Beijing Lecture Association, to deliver a series of lectures. His message of spiritualism and humanism created ripples in a section of Chinese intellectuals.

Nirupama Rao writes of this visit: “The renowned Chinese scholar, Liang Qichao, presented him the Chinese name ‘Zhu Zhendan,’ which translates as “thunder of the oriental dawn”. Tagore was deeply touched.”

Tagore engaged in civilizational dialogues with a range of Chinese poets, including Hu Shi and Xu Zhimo. His poems Stray Birds and The Crescent Moon, created new styles in Chinese poetry.

However Tagore’s emphasis on spirituality, his trenchant critique of Western materialism, as well as his visit to the deposed Chinese Emperor, did not go down well.

Tagore became controversial because of political reasons but as a poet of Asia he received wide appreciation in China. It is a reflection of Tagore’s continuing popularity that the Chinese government released in 2016, the first volume of Tagore’s collected works, translated into Chinese.

Similar were Tagore’s visits to Japan in 1916, 1924 and 1929 where he received accolades. However, the moment he criticised Japanese nationalism and its imperialist policies in China, the crowds started thinning at his lectures.

Tagore visited Burma (presently Myanmar) thrice, to rousing receptions on all his visits. On his second visit to Rangoon (now Yangon) in 1924, a plaque was put up in his honour, with his poem, symbolising the cultural interaction and friendship that his visits generated.

Tagore’s visits created interest among Burmese students to study at Visva-Bharati. One of them was Myanmar’s prominent modern artist Bagyi Aung Soe, who later studied fine arts at Shantiniketan.

Among all the countries of Asia that Tagore visited, his relationship with Sri Lanka was the most intimate. During Tagore’s visit to Sri Lanka in 1934, at the invitation of statesman and philanthropist Wilmot Perera, he laid the foundation stone for the Institute of Rural Reconstruction at Horana.

This institute was modelled on the lines of Tagore’s Sriniketan – the Institute of Rural Reconstruction – in Visva-Bharati. At the very inception, there were four sections that focused on fine arts and handicraft as at Shantiniketan. On its 10th anniversary, in 1944, the Horana institute started a fair like the Poush Mela.

Inspired by Tagore’s words to take pride in their country’s own cultural history and contribute towards its revival, many Sri Lankan students went to study at Visva Bharati. Among them three stand out – Ananda Samarakoon, Chitrasena and Sunil Santha.

Ananda Samarakoon was inspired by Tagore to compose Sri Lanka’s national anthem and developed a music unique to the island nation. Chitrasena established the traditional Sri Lankan dance techniques like Kandyan, which had been suppressed during British rule. Sunil Santha was pivotal in the development of Sinhala music and folk songs. 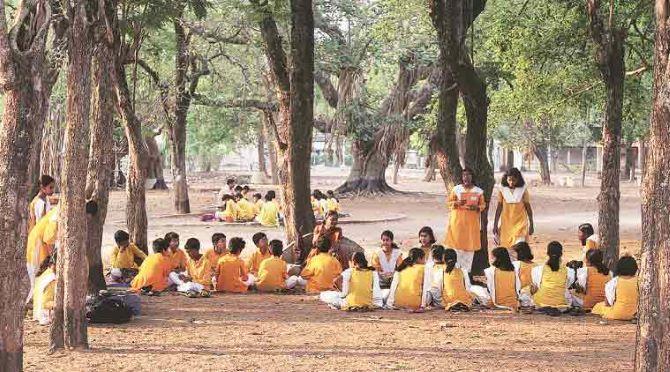 In Viswa Bharti classes are held under trees

Tagore also had an uncommon and unique relationship with another neighbouring country – Bangladesh.

In 1905, when the British moved to divide Bengal into two parts, based on religion, he composed the song Amar sonar bangla, Aami tomai bhalobasi (My golden Bengal, I love you so much).

During the language movement of 1950, against the imposition of Urdu as the principal language of East Pakistan, Amar sonar bangla became the representative song of revolt.

When Bangladesh was created in 1971, Mujibur Rehman declared it as the national anthem. Bulbul Mahalonobis, the well-known Bangladeshi singer recalls “Rabindranath and our Liberation War are intricately connected. His songs were a great source of inspiration to millions of people seeking freedom and liberation.”

In 1934, Tagore visited Iran for the inauguration of the memorial at Tus (near Mashhad) for poet Ferdowsi, the author of the epic Shahnameh, who had revived the Farsi language. During that visit, Tagore mentioned that he was of Persian origin, that his ancestors had emigrated to Bengal and that he was happy visiting his home.

No Laurel for the Nobel Laureate

Tagore captured the attention of the world when he became the first Asian to be awarded the Nobel prize in Literature in 1913.

However, the Bard of Asia, who gave India its national anthem, is now facing criticism and disrespect at the hands of the saffron brigade or RSS, the adherents of the Hindutva ideology.

Amartya Sen in his The New York Review article says: “The excitement that Tagore’s writings created in the early years of the 20th Century in Europe and America has largely vanished’.

Tagore had a sense of history. His secular philosophy was born out of the realization of India as a confluence of many races, religions, languages and cultures, of people who came here over centuries from diverse places and settled and made this country their own.

Tagore constructed his historical poems not on the figment of his imagination,

But based on historical books or records. The poem ‘Pujarini’ about the persecution of the Buddhists under the rule of the king Ajatshatru during 400-500 BC, is based on the Buddhist text Abadan Shatak.

This poem elucidates how Shrimati, the royal maid, loyal to Buddha, preferred to die rather than forego her worship at Buddha’s stupa.

The significance of this poem could not be more relevant now.

Tagore’s ideas and works at Visva Bharati are under attack from the saffron brigade or the RSS – adherents of the Hindutva ideology.

However, the civil society of Shantiniketan, consisting of students, teachers and local residents would rather die than forgo Tagore’s ethos of a secular, inclusive, universal, humanist philosophy.

This is the time for the secular and democratic forces of the world to rally behind them and the ideas that epitomize Rabindranath Tagore.

(Aurobindo Ghose is a New Delhi-based scholar, lawyer and human rights activist. He can be reached at: )