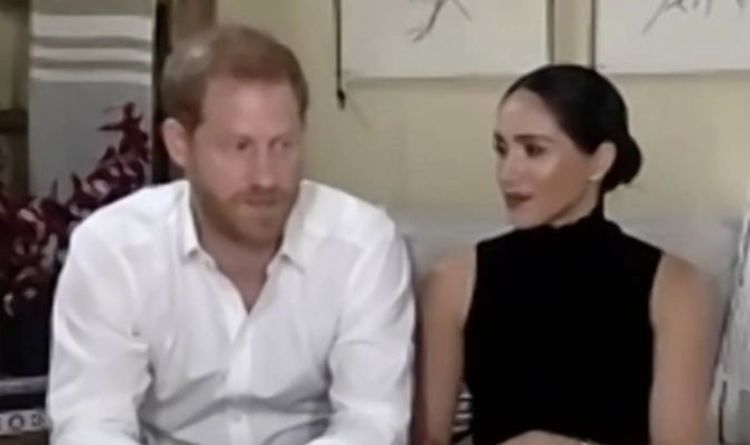 Prince Harry and Meghan Markle joined Nobel Peace Prize winner Malala Yousafzai in a video chat focused on the female-male education gap and how it has been worsened by the coronavirus pandemic. The trio highlighted the critical importance of having girls across the world being able to access education.

But during the conference call, the Duke of Sussex also joked about how he did not realise when he was young how grateful he should have been for the education he received.

After both Meghan and Harry were asked by Malala about their experience in school, the Eton alumni said: “We do take it for granted and it is a privilege but every single person, every single child, every single young person needs an education.

“To know there’s over 130 million girls out of education right now, before the pandemic, and the numbers are only going to go up, it worries me and it probably worries all of us, the effect that is going to have not just on the individual, but on the family, and community, for the country and the world at large.”

He added: “I’m hugely grateful for the education I was lucky enough to have, at the time I certainly probably wasn’t as grateful, but looking back at it now, I’m very, very blessed with having such amazing options.”

Prince Harry and Meghan Markle acknowledged they had been lucky to have access to a good education (Image: MALALA.ORG)

The young royal later joined his brother Prince William at Ludgrove School in Berkshire, where Princess Diana was said to visit her sons on weekends.

After passing the entrance exams, he was admitted to Eton College.

While there, Harry’s elder brother introduced him to his own circle of trusted friends, according to biographer Robert Lacey.

Prince Harry left Eton in 2003, achieving a grade B in art and D in geography.

Unlike Prince William, the Duke of Sussex decided not to attend university but to join the Army.

Prince Harry in his room at Eton (Image: GETTY)

Before entering the Royal Military Academy Sandhurst, the prince took a gap year during which he travelled to several countries – including Lesotho.

This trip proved to be particularly important to his future charitable work, as two years later Prince Harry returned to the country to launch his first non-for-profit organisation, Sentebale.

During the video call, Prince Harry highlighted just how vital it is for the wellbeing of the whole planet to grant access to education to all girls.

Saying it is “absolutely critical” to have girls being educated when dealing with climate change, the prince explained: “With an education, it provides money, it provides an income, which makes you less susceptible to disaster, less consumption, so all of these things are so deeply connected to one another that I think education at a young age opens up so many doors and so many opportunities and so many possibilities.

Prince Harry and Meghan Markle married in May 2018 (Image: EXPRESS)

A research carried out by the Malala Fund, which fights to grant access to education to all girls, found that as many as 130 millions women had not been given an education before the pandemic.

The coronavirus outbreak likely made things worse, with some 20 million girls being forced to cut their education short as a result of the health emergency and the economic disruptions that followed.

Speaking about how COVID-19 is having an impact on education, the Duchess said: “So much is at stake if we don’t give a young woman an opportunity to learn and to get an education.

“I think there’s no greater time for all of us to acknowledge that with everything else happening with COVID, on International Day of the Girl, for each of us to make a commitment that yes, the layers upon layers that are happening in this context of COVID-19 are immense but all it has done is add on top of the problems that already existed.”

Meghan’s humanitarian work before joining the Royal Family was already focused on female empowerment, the stigma surrounding menstruation and access to education.

In 2016, the Duchess travelled to Rwanda to highlight the importance of providing adequate bathrooms in schools.

The following year, Meghan wrote an op-ed for Time magazine on the menstruation stigma.

While a senior royal, Meghan continued her efforts as head of the Association of Commonwealth Universities.

In 2019, the Duchess announced three new grants for women’s education in South Africa.

And this year, Meghan and Harry matched a donation of £100,000 to Camfed made by their fans upon their birthdays, granting higher access to education to more than 100 young women.