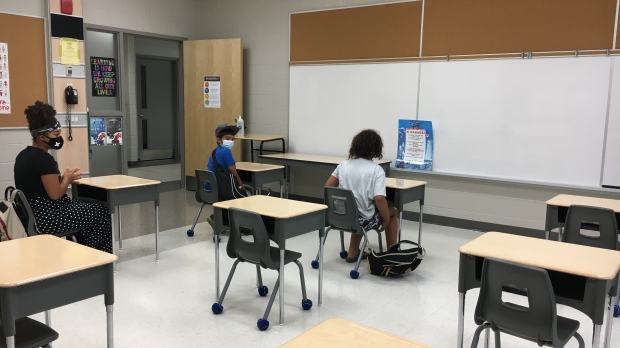 The Ford government is spending another $35 million to hire teachers and purchase new equipment for schools in areas hit hardest by COVID-19.

The money will flow to boards in Toronto, Peel Region, Ottawa and York Region.

Education Minister Stephen Lecce said the money will be split proportionally between all public school boards in those impacted municipalities, with the Toronto District School Board (TDSB) receiving $9 million.

He said the TDSB’s allotment could hire 120 more teachers or purchase 11,000 more computers and tablets.

School boards have purchased or distributed 120,000 computers and tablets this year to assist students in low-income households with remote learning.

As of Friday, 335 of the province’s 4,828 publicly-funded schools had seen at least one case of COVID-19 in a student or staff member.

One school in the GTA is now closed due to infections.

Asked at what threshold the province would consider closing schools in a given neighbourhood or region, Chief Medical Officer of Health Dr. David Williams said things would have to increase “far more than we’ve seen up until now,” for any closure to be considered.

Boards in the impacted area, such as the TDSB, used earlier funds to reduce class sizes, but only in areas expected to be at highest risk of a second wave of infection.

Primary school classes in areas not deemed to be at high risk can still be as large as 27 for grades 4 to 8, and 26 in kindergarten.

Most high school classes are capped at 15, with attendance on alternating days.

Approximately 1/3rd of students in the TDSB are studying virtually. In Peel Region, roughly half of elementary students are learning from home.