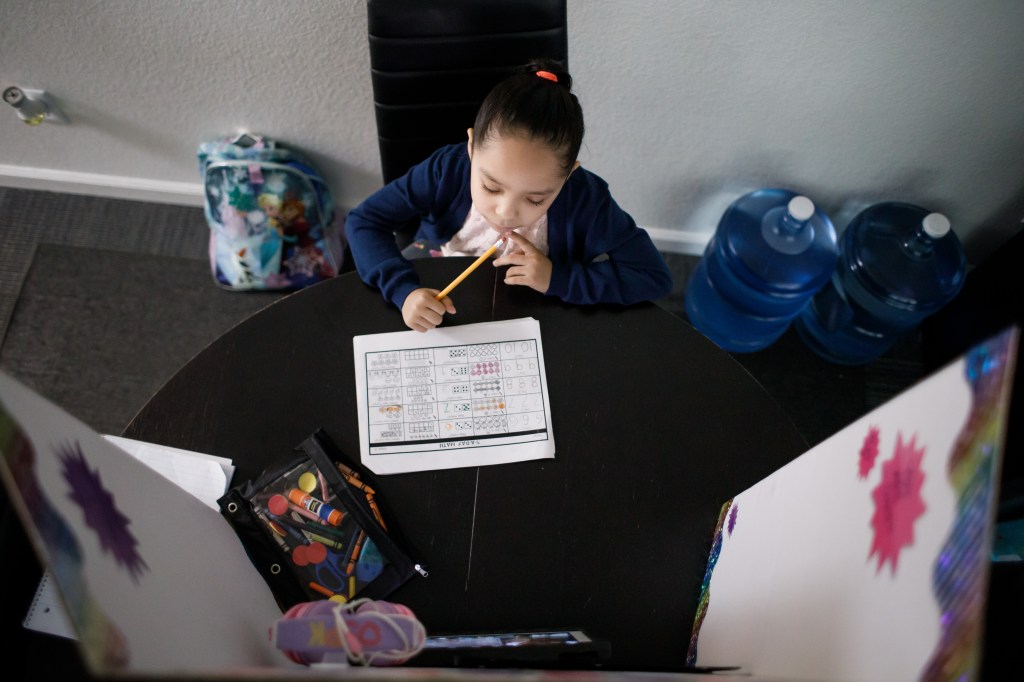 Gisselle Trejo is set to go at 9 a.m., seated at the kitchen table of her family’s San Jose apartment behind a cardboard screen lovingly decorated with her name and colorful inspirations like “You are smart.” She’s watching for her kindergarten teacher to appear on the electronic tablet.

Her older brother, Daniel, is at his bedroom desk behind his own cardboard screen and “You are awesome” motivations, a tablet and laptop computer at the ready for his 4th-grade math test.

By most accounts, this so-called distance learning is much improved over last spring, when the rapidly spreading coronavirus pandemic forced sudden classroom closures in March. For the Trejos at Linda Vista Elementary, that meant just picking up paper assignment packets to complete at home — “no structure, no schedule, nothing,” said Gisselle and Daniel’s mother, Jessica Trejo.

Now, like most of California’s more than 6 million students, they have a structured online class schedule, where they see and speak with their teacher and classmates virtually over computer screens.

While there’s little argument kids learn better in classrooms than online, are parents giving distance learning 2.0 a passing grade? A recent survey sponsored by nonprofit EdSource found nearly four out of five say it’s hard to keep their children interested and motivated with distance learning and more than two out of three fearing their education will suffer if it continues through the school year.

“It varies district to district, but given the rapid turnaround to try to get on top of this, I think school districts and schools are doing a darn good job,” said Mark Warschauer, an education professor at the University of California-Irvine and director of its Online Learning Research Center.

“That’s not to say everything is going swimmingly,” he said. “It’s probably going better than it was before for the older kids. For kindergarten, first grade, second grade, I think it’s still pretty hard. Many kids that age don’t have the patience to participate online for a long time.”

“But it’s much better now, and I’m grateful,” said Jones, who is “adamantly opposed” to a return to the classroom until it’s safer. “Unfortunately it’s not like schools are a COVID-free zone, and I’m not willing to take that gamble on the health and safety of my son, or the health of another person for that matter. The teacher and school have done a great job of connecting with students and parents, keeping them apprised of expectations.”

What’s worked? Warschauer said districts spent the summer ensuring their kids had the computers and internet access — a huge barrier in many areas with the sudden closures in March — and consistent software programs for online learning. They spent time training teachers, and delivered a “healthy combination” of short but structured online instruction to reduce “Zoom fatigue” and unstructured independent work. Instructional materials are clear and well-organized.

As a recent school day began for Gisselle, her kindergarten teacher, Lily Chang, greeted the class by singing “Good morning to you,” and thanked them for coming to “Zoom school.” She reminds them to stay on camera, not eat during class, stay muted and raise their hands to speak.

“A, alligator, ah,” Gisselle said to the camera during a phonics lesson. “B, bear, buh.”

“Gisselle, you’re doing it just right,” Chang told her. “Not too fast, not too slow.”

Down the hall, teacher Tina Shrum reminded Daniel’s class not to rush through their online math test on decimals, estimates and rounding.

“No one should be done in five minutes,” she said. “It does count.”

Curt Bonk, an education professor at Indiana University who has studied online learning for 30 years, says he’s seen tremendous collaboration, as well as creativity in the classroom.

“There’s an amazing momentum today toward finding out what works,” Bonk said.

Jones said it’s little things that make the difference for his kindergartener. He can’t always help his son while he’s in another room doing his job as a political and community engagement director for the nonprofit Just Cities. But he arranged with the teacher to text him when his son loses focus.

“That’s what’s needed,” Jones said. “I’m fortunate and blessed that my son has a teacher so responsive.”

Stefanie Taylor, whose son Zachary attends San Jose’s Santa Teresa High School, acknowledges changes this fall like a fixed online class schedule have been a big improvement over last spring. And the school has at least allowed Zachary to come to the campus pool for water polo workouts, even if the team can’t play. But she says he wants to be back in class and worries his education is suffering.

“It’s shocking when you hear from your kids that they’d rather be in school,” Taylor said. “I don’t think they’re learning as well.”

For the Trejos, the Alum Rock School District plans to stick with distance learning through at least December. Jessica Trejo said that although her family tested positive for the coronavirus a month ago and cleared quarantine without having symptoms, her husband still considers opening classrooms now too risky.

That doesn’t mean they aren’t anxious to go back. Their son Daniel appreciates seeing friends online but really misses seeing them “in the class, going outside to the playground and playing.”

His mother put a lot of work into making comfortable schoolwork stations for her kids and arrangements with her job as a family resource center coordinator at nonprofit SOMOS Mayfair that allow her to be home with them some days.

While she is grateful for the distance learning improvements, she knows even the best online school is no substitute.

“I feel like it’s time to get back to school,” she said.