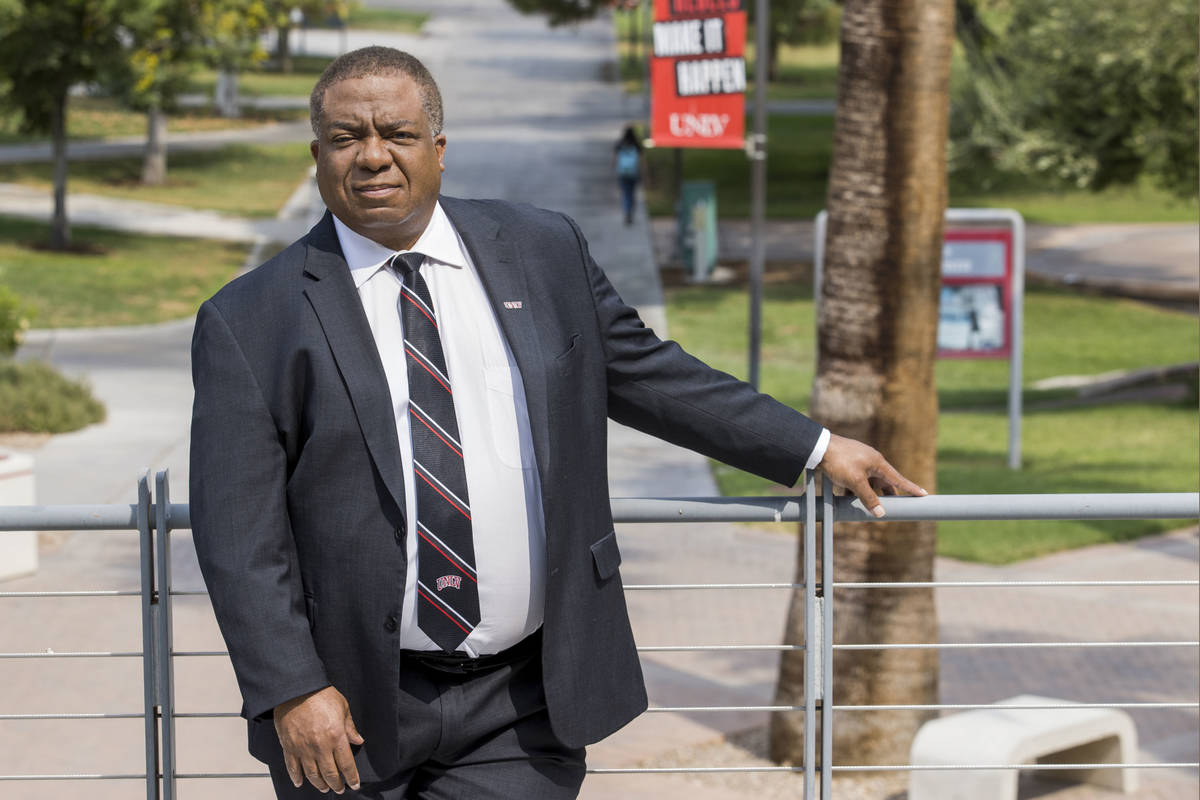 New UNLV President Keith Whitfield described his first month on the job as “drinking from a fire hose.”

In July, the Nevada System of Higher Education’s Board of Regents voted to hire Whitfield — following a search committee’s unanimous recommendation — under a four-year contract. He started on the job Aug. 24, the first day of the fall semester, amid the COVID-19 pandemic.

UNLV — which has about 31,000 students and R1 research status by The Carnegie Foundation for the Advancement of Teaching for “very high research activity” — is “such an incredibly complex organization,” Whitfield said in a Friday interview with the Review-Journal.

Whitfield said he’s “really just learning everything and not presuming anything” about what’s going on at the university. He said he has received a lot of support stepping into the position.

As the new president, “it’s trying to figure out how you take great to better,” he said.

Whitfield said UNLV has a lot of history, even though the university is only 63 years old, and there is much to learn. “There’s incredible potential here.”

Whitfield — who was previously provost and senior vice president for academic affairs at Wayne State University in Detroit for four years — replaces acting UNLV President Marta Meana, who has been on the job since June 2018.

“The longer you’re in administration, the more you forget about what your PhD is in,” he said.

Whitfield is a researcher of about 30 years on life span development — specifically, aging. He has authored or coauthored more than 200 publications.

He said his first experience as an administrator was as assistant director of new student relations while he was a graduate student at Texas Tech University.

He has climbed the ranks ever since and other previous positions include as professor in charge of the graduate program in the Department of Biobehavioral Health at Penn State University and vice provost for academic affairs at Duke University in North Carolina.

Whitfield said his position at Wayne State was a unique opportunity. “Most of the time, provosts are singularly over faculty. But with that particular position, I was going to be over student affairs as well.”

People see terrible things that have happened due to the COVID-19 pandemic — including job losses and deaths — and that affects the community, Whitfield said.

He said there’s a need to acknowledge the challenges, look for opportunities and keep a future horizon perspective. “We will get to the other side of this at some point in time.”

Whitfield said the state’s higher education system, though, did take a couple of significant hits with state funding due to the pandemic.

UNLV faculty have contributed to the fight against COVID-19, he said, with one example being the on-campus production of viral transport medium, which is used to preserve nasal swab samples.

As for COVID-19 cases, Whitfield said he checks on the numbers at least every other day. “Right now, they’re staying very low.”

In terms of school reopening considerations, “a lot of the planning was done well before I was here,” he said, mentioning interim executive vice president and provost Chris Heavy — one of four finalists for the president position — and Meana. “Those plans were pretty much set.”

He said he kept asking a bunch of questions related to COVID-19 response during the onboarding process, and UNLV is following — and sometimes exceeding — best practices.

Ensuring health, safety and wellbeing is the top priority, he said. “They’ve clearly been doing that here.”

Whitfield said he wants to ensure there’s not a situation where the school puts the community in a compromised position with COVID-19 cases and that the university is contributing to virus mitigation.

He said some residential-style colleges around the country were overly optimistic this fall that they could restart in-person classes. UNLV is offering about 80 percent of its fall semester classes remotely due to the pandemic.

Beyond COVID-19 response, Whitfield said a few areas he wants to focus on at UNLV are student success, connections with the community and doubling down on the university’s R1 research status.

When looking at how to “make great better” at UNLV, one area is student success and in particular, working to improve the graduation rate, Whitfield said. ‘There’s always room for growth and development.”

“That was not done by me alone,” Whitfield said about the boost in graduation rate, noting it was done by a team.

He said he wants to be an extremely student-oriented president while at UNLV. He said he also wants to make sure UNLV is supporting students “in any way we can,” including with their wellbeing, curriculum and making there are as few hurdles as possible for them to overcome.

Whitfield said he also plans to look at UNLV’s connections to the community. “We already have good connections, but I think we should do more.”

Another goal: making sure to double down on the university’s R1 research status and helping encourage interdisciplinary research, he said, noting there are a lot of grant opportunities.

In terms of diversity initiatives, he said wants to have meetings with student affairs staff — one about student success and one about social justice.

UNLV created an Anti-Black Racism Task Force this summer, which released recommendations in July for addressing safety, equity and inclusion among Black students and employees.

Earlier this week, U.S. News & World Report released rankings of the most diverse colleges and universities in the nation and UNLV tied for second.