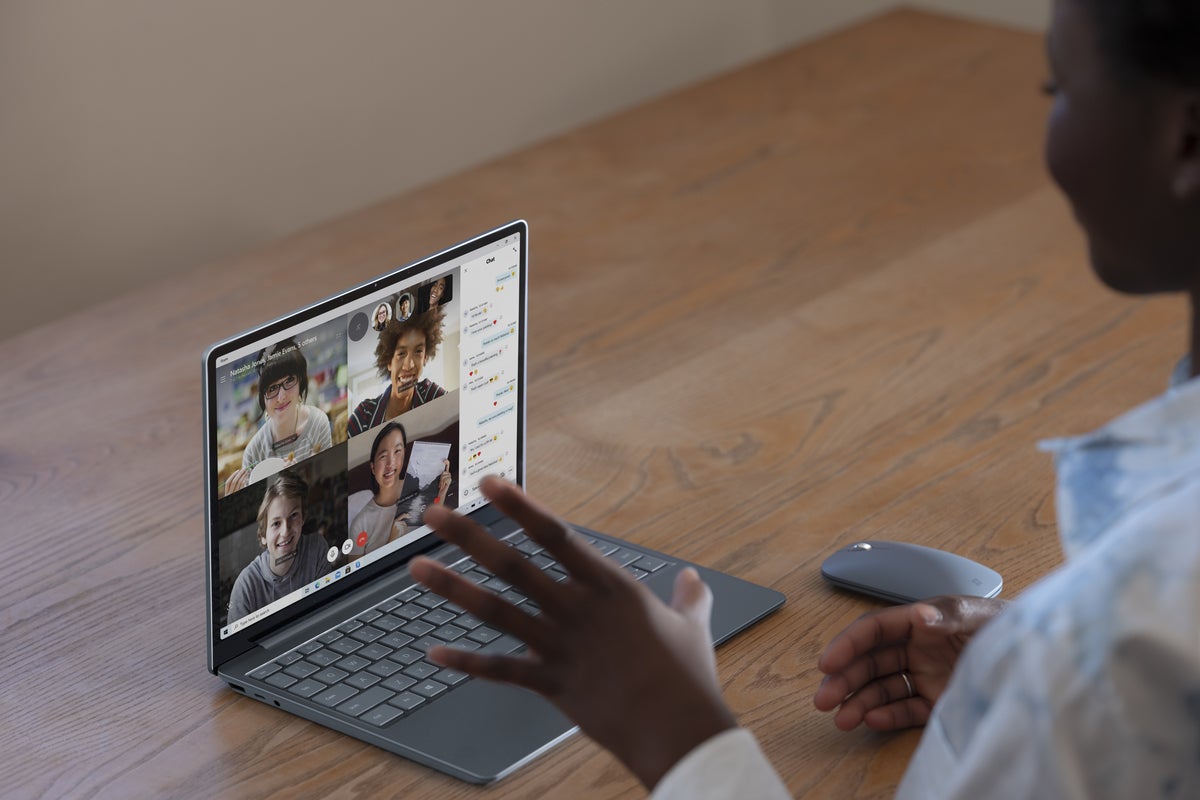 Microsoft’s new Surface Laptop Go finally looks like the Surface that everyone can buy. Announced Thursday, it’s a smaller 12.5-inch notebook PC that retains the high points of the Surface lineup, at an accessible $549 price. Microsoft begins selling it October 13.

Microsoft’s new Surface Laptop Go fits within the niche between the 10.5-inch Surface Go 2 tablet, and the 13-inch versions of the Surface Laptop 3. Inside lies a 10th-gen Core chip, though Microsoft has made some compromises, too: a return to Windows 10 S and a display that doesn’t quite reach 1080p resolution.

We haven’t seen this product in person yet, but we already have a lot of information about it. Keep reading to learn more about this affordable Surface.

Microsoft’s offering the Surface Laptop Go in three different color schemes—the familiar Platinum and Sandstone, but also a new Ice Blue option. While you’re probably familiar with the Sandstone and Platinum finishes, here’s a look at the Ice Blue finish:

Microsoft is offering overlapping configurations of the Surface Laptop Go for consumers, education, and business. Microsoft’s education channel offers an additional model not shown here. All of these will go on sale October 13.

While that $549 starting price is appealing, the basic Core i5/4GB RAM/64GB configuration should probably be passed over in favor of more powerful options. The $699 Core i5/8GB RAM/128GB SSD is acceptable, especially when paired with Microsoft’s OneDrive cloud storage.

Across all configurations, Microsoft says you can expect the familiar Surface keyboard, Windows Hello accessibility and strong battery life, albeit with a few compromises here and there.

The second is the Surface Laptop Go’s 12.45-inch display. Though it incorporates the familiar 3:2 ratio found in other Surfaces, it doesn’t quite achieve 1080p resolution, at 1536×1024 (148 ppi). To be fair, that’s about the pixels-per-inch (PPI) of a 15-inch 1080p display, though buyers may not realize that. In any event, we’ll have to test it to see whether that resolution actually works within the smaller screen.

Microsoft’s other Surface devices are known for having high-quality, 1080p cameras, but the Surface Laptop Go steps down to 720p—which, to be fair, is par for the course on many other rival laptops.

What we haven’t seen before on a Surface product is a fingerprint reader—other Surface products have used depth cameras for authentication. Microsoft has mounted it on top of the Surface Laptop Go’s power button. This approach has been effective for laptops we’ve seen from Huawei, such as its Matebook X Pro.

One interesting wrinkle is that the Core i5/4GB/64GB option does not include the fingerprint reader in the power button. We’re not quite sure why, or whether Windows Hello is enabled on this configuration at all.

The Surface Laptop Go design shows the give and take of creating an affordable laptop. Microsoft has returned to its metal finishes, apparently ditching the Alcantara fabric coating entirely. The smaller 12.4-inch PixelSense display may feel cramped for intensive work, but it certainly helps shave off cost—and it might not be seen as a major limitation if customers are working in more cramped conditions at home anyway.

The Surface Laptop Go’s port configuration appears very familiar, with a mix of USB-A and USB-C ports alongside the Surface Connector. You’ll probably want to add a USB-C hub to your shopping list if you’re thinking about an external monitor–and you might be, given the Surface Laptop Go’s smaller screen. Even the 10.5-inch Surface Go 2 provided a 1920×1280 display. Intel’s 10th-gen processors support a 1080p external monitor, though, so adding one shouldn’t be an issue.

Microsoft says the Surface Laptop Go’s keyboard is equipped with a comfortable 1.3mm of key travel. Keyboards are a consistent strength for Microsoft’s Surface family, though earlier Surface Laptops included a more luxurious 1.5mm of key travel. (That tiny difference, believe it or not, is noticeable.) Underneath are Microsoft’s Omnisonic speakers. There’s also a pair of far-field mics for Microsoft Teams or Zoom calls.

Microsoft has flirted with a mass-market Surface before, but there have always been some tradeoffs. Microsoft’s first-generation Surface Laptop established the basics—a great display, keyboard and battery life—within a streamlined, minimalist design aimed at turning heads from Apple’s MacBooks on college campuses. But it also shipped with Windows 10 S inside, which may have turned off potential buyers. Microsoft’s Surface Laptop 2 was more of the same, while the powerful Surface Laptop 3 demanded a hefty $2,000 for the Intel “Ice Lake” option.

Meanwhile, Microsoft’s “affordable” Surface was its Surface Go lineup, a compact 10-inch tablet that cost $399 and saddled you with a somewhat anemic Pentium-class processor. Our $729 Surface Go 2 review unit suffered from the same limitations—and, unfortunately, charged an extra $130 for the keyboard.

The Surface Laptop Go fits somewhere in the middle. Will its performance follow suit? We’ll let you know when we’ve had a chance to test it.

Note: When you purchase something after clicking links in our articles, we may earn a small commission. Read our affiliate link policy for more details.