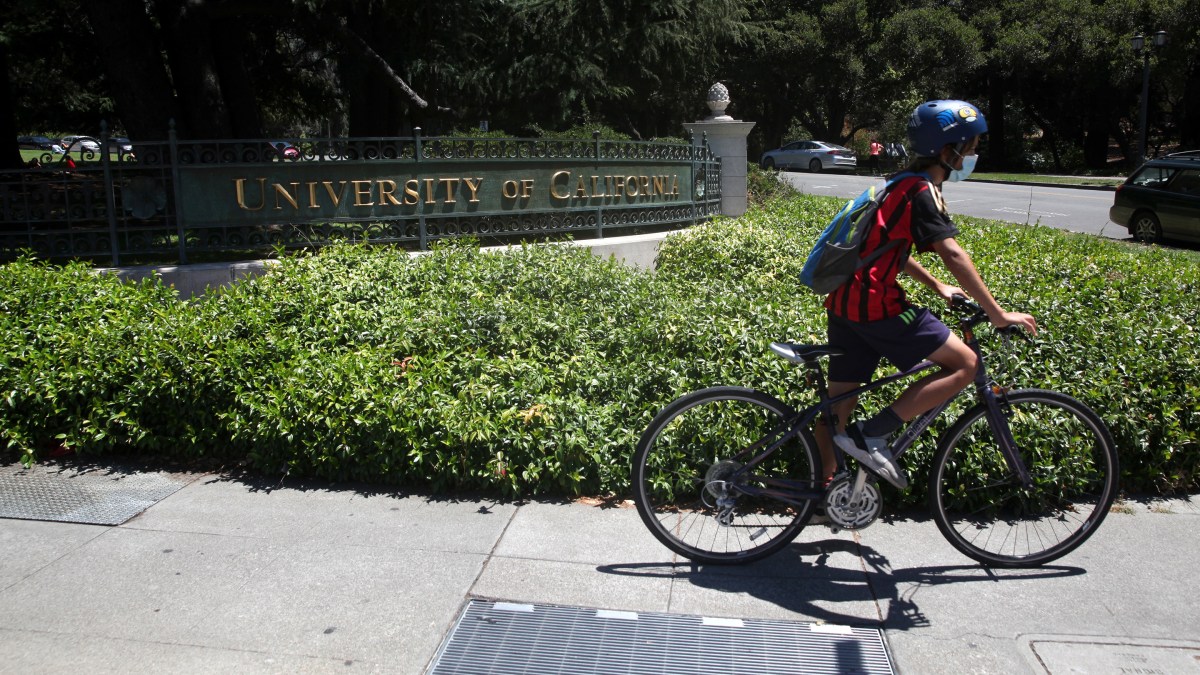 Desteny Lara is 18, and she goes to California State University, East Bay. Like many college students in America, she recently had to leave campus and move back home — she’s from South Central Los Angeles. For her, moving back means living in a two-bedroom apartment with 10 family members and grappling with how to keep her focus.

“When it comes to concentrating and doing work, I normally do it at night, because everyone’s asleep. Everyone’s quiet, and it makes me focus more,” Lara says.

Still, it’s getting challenging. And she says she wonders how much longer she can do this for: “Sometimes I think to myself, is school really worth it?”

This is exactly what educators and experts are worried about. COVID-19 and the ensuing economic crisis is putting even more pressure on low-income and first-generation college students. It’s starting to show: So far, there’s been a decrease in students applying for financial aid — especially from low-income students. Around 100,000 fewer high school seniors completed the Free Application for Federal Student Aid, or FAFSA, to attend college this year.

Michele Siqueiros, president of the California-based advocacy organization Campaign for College Opportunity, says the irony is, higher education “is absolutely the only path often for low-income students out of poverty.”

With the average student loan debt at around $30,000, the inaccessibility of a college education was a problem long before COVID-19. Black and Latino college education levels lag far behind whites, and many worry that the pandemic will make it worse.

Brian Troyer, dean of undergraduate admissions at Marquette University in Wisconsin, says he’s heard a lot of student concerns about financial instability since the spring. They include questions like “What happens if our family situation changes? Might I qualify for financial aid?”

In August, the U.S. Census Bureau found students from families with incomes under $75,000 were almost twice as likely to say they canceled plans to attend college than students from wealthier families. “That’s worrisome,” says Siqueiros. “Because we know that when students, especially when low-income students leave higher education, the probability of them returning is highly unlikely.”

Back in South Central LA, Desteny Lara just took on a new job at a fast food restaurant, to make ends meet. She’s worried about juggling school and work. But then she remembers that she’s the first one to make it to college. And that’s a really big deal in her family. “My whole family basically looks up to me. Like my siblings, my cousins. Like [they say] ‘if she can go to college, then you can go to college, too,’” she says.

It depends on where you live. The national unemployment rate has fallen from nearly 15% in April down to 8.4% percent last month. That number, however, masks some big differences in how states are recovering from the huge job losses resulting from the pandemic. Nevada, Hawaii, California and New York have unemployment rates ranging from 11% to more than 13%. Unemployment rates in Idaho, Nebraska, South Dakota and Vermont have now fallen below 5%.

Will it work to fine people who refuse to wear a mask?

Travelers in the New York City transit system are subject to $50 fines for not wearing masks. It’s one of many jurisdictions imposing financial penalties: It’s $220 in Singapore, $130 in the United Kingdom and a whopping $400 in Glendale, California. And losses loom larger than gains, behavioral scientists say. So that principle suggests that for policymakers trying to nudge people’s public behavior, it may be better to take away than to give.

How are restaurants recovering?

Nearly 100,000 restaurants are closed either permanently or for the long term — nearly 1 in 6, according to a new survey by the National Restaurant Association. Almost 4.5 million jobs still haven’t come back. Some restaurants have been able to get by on innovation, focusing on delivery, selling meal or cocktail kits, dining outside — though that option that will disappear in northern states as temperatures fall. But however you slice it, one analyst said, the United States will end the year with fewer restaurants than it began with. And it’s the larger chains that are more likely to survive.

As a nonprofit news organization, our future depends on listeners like you who believe in the power of public service journalism.

Your investment in Marketplace helps us remain paywall-free and ensures everyone has access to trustworthy, unbiased news and information, regardless of their ability to pay.

Donate today — in any amount — to become a Marketplace Investor. Now more than ever, your commitment makes a difference.