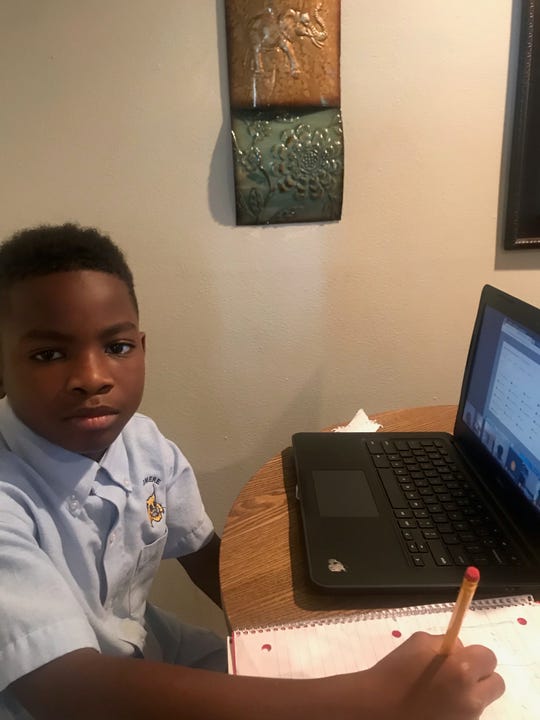 The attorney general for Louisiana launched an investigation Friday into a public elementary school for suspending a Black fourth-grader after his teacher noticed a BB gun in his room during an online class.

“I am alarmed by what appears to not only be multiple violations of both the state and federal Constitutions, but also blatant government overreach by the school system,” Attorney General Jeff Landry said in a statement. “For anyone to conclude that a student’s home is now school property because of connectivity through video conferencing is absurd.”

The Jefferson Parish Public school system said Ka Mauri Harrison brandished the BB gun during the virtual class on Sept. 11 and was suspended because he violated an in-class instruction policy.

But Ka Mauri’s family said the school district violated their privacy and didn’t give the child due process. Ka Mauri is a student at Woodmere Elementary in Harvey, Louisiana.

A school behavior report obtained by the Associated Press said Ka Mauri was taking a test with his computer muted when his brother walked into the room and tripped over the BB gun that was lying on the floor. The brothers share a room.

The report said Ka Mauri left his seat, out of view of the teacher, and returned with “what appeared to be a full-sized rifle in his possession.”

The teacher tried waving at him to get his attention, but his computer was muted because he was taking a test. He was then kicked out of the class video conference. He faced expulsion, but was ultimately forced to spend nearly two weeks in at-home suspension.

Harrison’s family is fighting the suspension on his record, arguing that he was unjustly punished for an act that did not take place within school grounds.

Chelsea Cusimano, a lawyer hired by the family, told USA TODAY that the school violated multiple due process violations in suspending him. She said that the school did not have distance learning-specific rules in place, instead basing their suspension on on-campus policies that should not apply to distance-learning students.

“Everything about this was so robotic in nature and unilaterally applied to Ka Mauri, almost as if to make him an example,” she said in an interview with USA TODAY.

Landry said the child’s punishment is out of line.

“It is ludicrous for this All-American kid to be punished for taking responsible actions just as it is for his parents to be accused of neglect,” the attorney general said.

A member of the school board, Simeon Dickerson, argued against the school’s decision, saying that the school should have withheld punishment as soon as they realized it was a BB gun.

Walter Kimbrough, president of Dillard University, a historically Black college in New Orleans, also took the school to task in a letter calling on Jefferson Parish schools superintendent James Gray to revoke Harrison’s suspension, arguing that his punishment did not fit the offense and may harm his future.

“Having a suspension on his record, as well as having to engage with a social worker, begins to track him in a way that we both know disproportionately harms Black male children,” Kimbrough wrote in the letter.

A representative from the Jefferson Parish public school system declined to make a statement to USA TODAY regarding Harrison, saying that they “do not comment on student records.”

“It is our policy that teachers and administrators may employ reasonable disciplinary and corrective measures to maintain order,” said the spokeswoman.