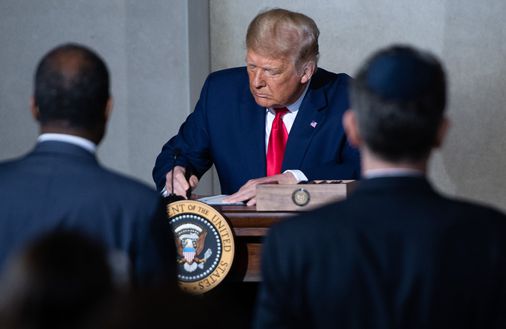 On Constitution Day, Sept. 17, President Trump announced that he would sign an executive order establishing a national commission to promote patriotic education. That same day, members of Congress introduced the bipartisan Educating for Democracy Act, which would authorize $1 billion for civic education.

Neither is a good idea, regardless of where you stand on the political spectrum.

The authors of the Constitution wisely did not list education as a federal power. As James Madison wrote in Federalist No. 10, Americans separate into factions when they think about questions such as how to educate young people, and no one faction should be able to tyrannize the rest. Nationally mandated civics education initiatives, whether they come from Republicans, Democrats, or members of both parties, open the door to having factions dictate to the rest of the country how to prepare children for citizenship.

Political science research has shown that top-down education reform initiatives tend to make parents express more negative attitudes about government and become less involved in their children’s education. In the name of civics education, both Trump and the sponsors of the Education for Democracy Act are telling parents and citizens, in effect, to keep their thoughts about civics education to themselves and let Washington-based policymakers make the call. That’s anti-democratic.

In his Constitution Day remarks at the White House Conference on American History, Trump said “to grow up in America is to live in a land where anything is possible, where anyone can rise, and where any dream can come true.” Many people agree with this general sentiment.

But then Trump went on to say that “the left-wing rioting and mayhem are the direct results of decades of left-wing indoctrination in our schools.” He said the New York Times’ 1619 Project is causing young people to lose confidence in the country’s founding ideals, and he announced that he would sign an executive order establishing a 1776 Commission to create a pro-American curriculum.

One critic tweeted: “The only version of US history that follows his vision is for and in service of whites only.”

Meanwhile, in another corner of the capital, Democratic Representative Rosa DeLauro of Connecticut and Republican Representative Tom Cole of Oklahoma introduced a bill that would nationalize their own vision of civics education.

“If students of all ages are not given the information in their classrooms to actively participate in our democracy, we cannot expect them to stay engaged and informed as adults,” DeLauro said.

The bill has five interlocking parts. It would help schools acquire high-quality curricula in American civics and history; fund colleges to train teachers in civics instruction; provide resources to nonprofits that develop programs in civics education; support research on best practices in civics education; and require states to administer the civics component of the National Assessment of Educational Progress exams every two years.

In her announcement, DeLauro mentioned that she was working with CivXNow, which is a coalition of organizations that are dedicated to civics education and could be eligible for grants under the proposed bill. CivXNow is a project of iCivics, a nonprofit dedicated to “reimagining civic learning.”

If that sounds unobjectionable, consider that one of the ways iCivics is reimagining civic learning is through video games. Students can play games in which they learn how to control each of the three branches of the government, pretend to be the president, or assist a Supreme Court justice in making a decision. Some of iCivics’ supporters include the Silicon Valley Community Foundation, Google Ads, and the William and Flora Hewlett Foundation.

Some people may love the tech-driven approach to civics education, while others believe that the last thing young people need to do is spend more time playing video games. Many people prefer Trump’s vision of patriotic education, but others think that vision glosses over the legacy of slavery in American history.

In other words, it’s easy to anticipate a lot of people will be disgruntled by any attempt to use the power of the federal government to force the entire country to adopt one vision of civics education.

To be clear, schools might do a poor job with citizen education. But having the federal government take over this responsibility is, in the words of Federalist No. 10, a remedy worse than the disease. We should respect the wisdom of the founders in not empowering the federal government to control curricula. The way to avoid tyranny and cultivate democratic sentiments is to follow America’s constitutional framework — and empower states and communities to decide for themselves how to prepare young people for citizenship.

Nicholas Tampio is a professor of political science at Fordham University.