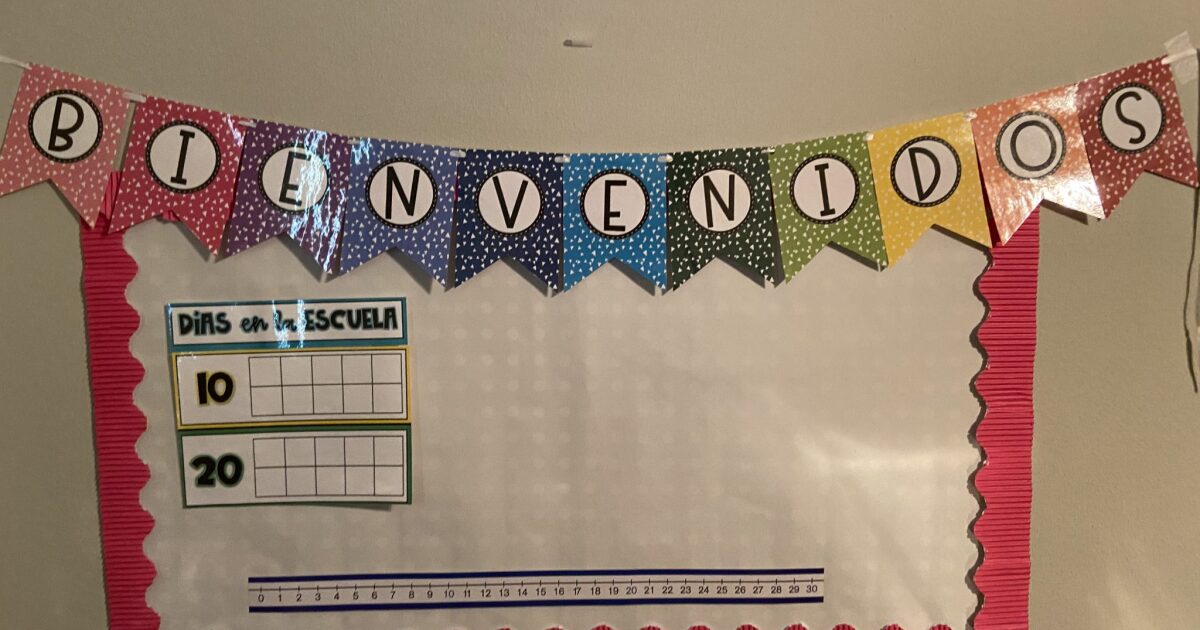 For months, Jocelyn Ramos imagined how she’d decorate her very own classroom for her first year of teaching: bright colors and a warm, rainbow theme. She just never expected it would be at her house.

“This is probably my favorite part because it just feels welcoming,” Ramos said in a video tour. “It’s a welcome bulletin board. It says ‘Bienvenidos.’”

Ramos has been getting ready to greet her class of 18 first graders at Moreno Elementary online, as the Houston Independent School District (HISD) starts the new school year with completely virtual instruction this week. HISD is one of several districts in the Greater Houston area, together welcoming nearly half a million children back to school for a mix of online and in-person instruction.

For brand new teachers like Ramos, it marks a different kind of milestone.

“Even before this COVID happened, every teacher that I would go up [to] would be like your first year is going to be survival mode,” Ramos said. “So I already knew that my first year was going to be hard and it was going to take work. But now that we’re starting virtually, it’s like one more thing has been added to your to-do list.”

Ramos said she always wanted to be a teacher. Growing up, she loved tutoring her younger cousins. The recent University of Houston grad studied bilingual education because that’s how she learned English. And she’ll be teaching in HISD for the next four years, as part of a scholarship program to grow the city’s teaching profession between HISD and UH, called Teach Forward Houston.

On top of her mind: Figuring out how to create the same kind of connections she had with her teachers with virtual school.

Those relationships are especially important for children learning English. Texas has over 1 million of these students — about one in five of all public school kids. Adding to the challenge of a regular school year, low-income and Latino children in Texas are less likely to have access to digital devices or high-quality Internet, according to a survey by the nonprofit Common Sense. And COVID-19 has been disproportionately impacting Hispanic families in Houston and statewide.

“It just seems like there’s more and more chaos in trying to do this,” said Hector Bojorquez, director of operations and educational practice with the advocacy group IDRA.

“Just the bilingual education situation, there’s less and less resources, I think, available for students online that fit for bilingual kids that are in a bilingual ed classroom that are available to them. So I think that’s becoming an issue,” he said.

However, to truly close the digital divide, families not only need access to devices, but they also need to know how to navigate online platforms, Bojorquez said.

“We have families in the Rio Grande Valley area, who themselves have been having issues and, you know, they ask themselves questions like, ‘Qué es eso de Zoom? Qué es eso?‘” he said.

The best thing bilingual ed teachers can do, Bojorquez said, is to give constant feedback to students and their parents.

“A rule I had when I was a teacher was I called every child’s parents three times with positive notes about their kids before calling about any concern. Three to one, it was always my three to one ratio,” said Bojorquez, who spent six years teaching bilingual education in the Edgewood Independent School District on the west side of San Antonio.

Building a sense of community

Building a sense of community also weighs on school administrators as they bring on new instructors. It’s been challenging since so much of school hiring and training has been remote.

That’s where you have to pull out your principal superpowers,” said Diana Castillo, who is the principal at Pilgrim Academy in Houston. She’s hired eight new teachers this year for her campus, where most of the 1,100 students are learning English.

“Staying in constant communication was something that was extremely important for us and especially over the summer,” Castillo said.

Castillo also paired new teachers with veteran educators. And as school staff stopped by campus to get supplies last week, administrators gave them a big welcome, cheering them on as they passed temperature checks and walked through the front door.

That support has made first-year instructor Dayanna Chicas-Aguirre feel like she’s got this.

“Even if there’s something that comes up, that I wasn’t 100% prepared for, I have the confidence that there will be someone there that can help me get to that 100%,” Chicas-Aguirre said.

She also graduated in May from UH’s College of Education and wanted to teach students learning English to give back. When she was in school, she was placed in mainstream classes even though she could only speak a few words of English, like hi and bye. She wants her third-grade students at Pilgrim Academy to have more support.

Still, she says starting her career during COVID feels bittersweet.

“It’s like feeling as if something was kind of stolen for me in a way for my first year experience,” Chicas-Aguirre said. “But also, it’s like such a unique experience that it just makes my first year so much more special, if that makes sense.”

That makes sense to her fellow first-year teacher, Jocelyn Ramos at Moreno Elementary in North Houston. Ramos can’t wait to get to know her first graders.

And COVID-19 can’t take that away.