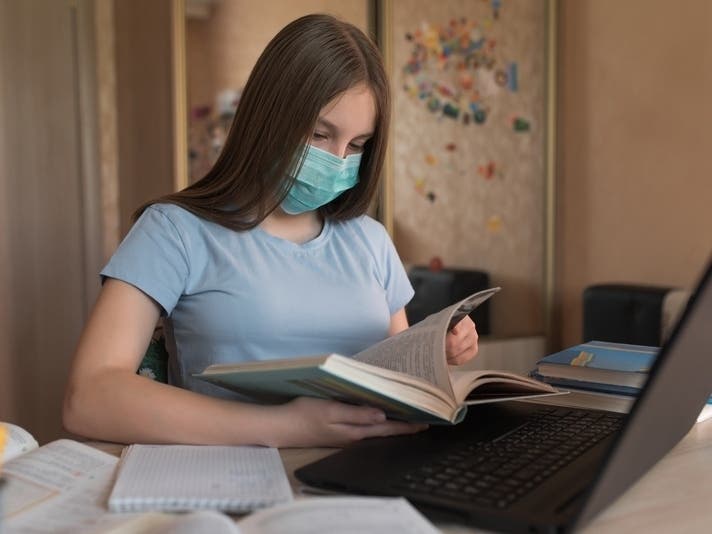 Eight teachers focused on providing live direct instruction to digital learning middle school students now are conducting these new sessions, which Holmes has observed, and reported as successfully engaging students through interactive lessons. She noted that participation totals have been disappointing, given that this service was provided in response to parent requests for more interaction, but she is hopeful it will increase.

She also shared with the school board very welcome news about the high school digital learning program – the NCAA has extended approval of the Apex program for its crediting purposes. The school district had requested this approval so that participation in Apex classes would not negatively impact student athletes who chose to learn at home.

Hightower said now that operations are more settled in Cherokee Schools’ seventh week, he and his staff are sharing reopening best practices with other school leaders through conference calls and visits. Fulton County staff will be visiting soon to talk with Holmes and her staff about Cherokee’s digital learning model.

Chair Kyla Cromer said she recently participated in a conference call with school board members from other large school systems.

“We are light years ahead of a lot of plans that are still trying to figure out what school is going to look like and how they’re going to reach kids,” she said. “I’m so proud of what we’ve been able to do.”

During the regular meeting, the board heard from two speakers for public participation, one who opposes the hybrid model in place at her son’s high school, and one who would like to see the hybrid model used in all schools. The hybrid model is in place at three high schools – Creekview, Etowah and Woodstock – until Oct. 9; it was enacted following a spike in positive cases and resulting high levels of mandated precautionary quarantines.

School board member Clark Menard, who said he now opposes the hybrid model after seeing it in practice as a Woodstock High School parent, describing it as the “worst” of the three models in place, asked Hightower to reconsider its usage. Menard expressed frustration that, while infection rates remain higher at Etowah High despite the model, rates are lower at Creekview High and Woodstock High, yet they remain in a pattern that only allows two days of in-person instruction each week. He raised concerns about the equity of the education for these students, compared with those at Cherokee County’s three other high schools, and noted that the district has not seen the hospitalization of students or significant transmission within schools.

Chapman echoed Menard’s concerns, adding that he supports ending the hybrid model’s use and is “optimistic and hopeful” that the three high schools can return to full in-person learning as soon as possible.

Hightower, who last month said the hybrid model would be considered as an alternative to a two-week full shutdown of a school seeing a high level of positive cases and quarantines, said his staff was closely monitoring the three schools, and he is open to change.

“We are not committed long term to the hybrid,” he said. “If it turns out this isn’t the right model for us, then we’ll scrap it.”