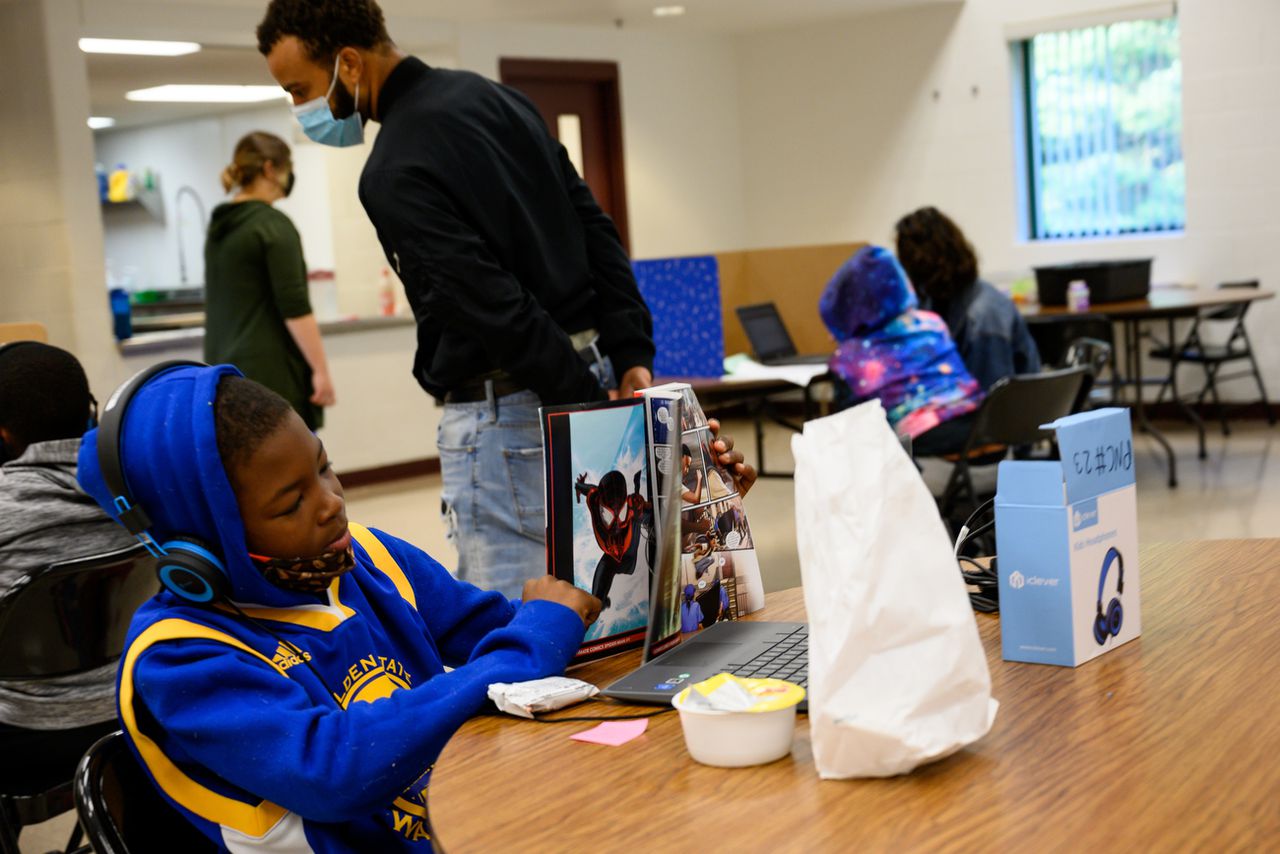 ANN ARBOR, MI – With six children, including five young children living at home, Antwanette Marshall had to make the difficult decision to temporarily leave her job at St. Joseph Mercy Ann Arbor when the coronavirus pandemic caused schools to close in March.

With no one willing to provide daycare for that many children during a pandemic, Marshall became her children’s daycare provider and learning facilitator as Ann Arbor Public Schools began the year with remote learning last week.

The one glimmer of hope for Marshall during this time has been the support services she’s received from Peace Neighborhood Center, which is providing critical in-person support for children whose parents might have other obligations during the COVID-19 pandemic.

The two days a week they are able to take the students out of the home and bring them to the center for in-person learning support, she said, has been a godsend.

“I didn’t grow up with my Dad and I never had a good relationship with my Mom, so people that I feel God has sent me along the way like there are at Peace Center give me a support system,” Marshall said. “I know I wouldn’t be able to do this without them.”

The neighborhood center on Ann Arbor’s northwest side and its two satellite locations have acted as a community partner with Ann Arbor Public Schools to provide everything from IT support to daycare to in-person interactions for children who have not had consistent interactions with other students for months.

Like nearly other sector of society, Peace Neighborhood Center has needed to completely shift its focus over the past six months, going from picking up children after school and providing homework support to picking them up at the beginning of the day and helping get their online learning started. That’s in addition to critical supports for food insecurity and emergency assistance for those who have lost wages that the community center continues to provide.

Peace Alternatives for Youth Program Coordinator Taylor Gamble referred to what the neighborhood center is offering as a “hodgepodge of assistance” as she helps middle school students who are having technical difficulties on a Monday morning when the district is getting into the thick of remote learning.

“The first couple of days it was ‘What is my login?’” Gamble said. “They’ve never had to use this platform, they don’t know what their email or their password is yet – they’ve all changed. It’s a matter of getting them logged in and showing them what (the learning platform) looks like and then navigating it with them.”

While Peace Neighborhood Center has been a mainstay in after-school programming for decades, its role during this academic year has become even more important as the AAPS’ largest participant in its Connections+ learning support groups.

The Connections+ program pairs the district with community centers and local nonprofits to support students with their virtual learning, with about 150 of the 175 students participating thus far at Peace Neighborhood Center and its two satellite locations.

At Peace, an Ann Arbor Public Schools employee is stationed to help facilitate any troubleshooting students need with their devices, cutting down on the nonprofit and parents’ involvement in resolving technological issues.

“We’re not doing this to intrude on the process that they have. We’re doing this to support it,” AAPS Executive Director of Student and School Safety Liz Margolis said.

“These places are reaching out on a daily basis and making connections with families. While not all the supports can be in-person, the virtual supports are still happening and that’s why we’re partnering with these groups – to make sure there’s a quick, same-day solution to whatever issues come up.”

Starting the day off right

When he was approached by Ann Arbor Public Schools with the idea of making Peace Neighborhood Center one of the district’s Connections+ program sites, Executive Director Bonnie Billups Jr. knew the nonprofit needed to continue meeting children and their families where they were at in the community.

An initial suggestion to provide virtual support was nixed by Billups, who advocated for a more “in the trenches” approach of bringing children on-site to help with their remote learning.

That idea resulted in children spending their mornings at Peace Neighborhood Center, with elementary students coming in Tuesday and Thursday, while middle and high school students are at Peace for learning on Monday and Friday.

“I have a parent who has four kids, and school was part of their regular plan for childcare,” said Billups, who has been involved in Peace’s operations for the better part of four decades. “Now that the school is taken away, we’ve had parents who have had to quit their jobs, reduce hours or manipulate their hours to try to be there.

“We became this program of being substitute educators and additional teaching resources to assist kids – not replacing teachers at all but being that extra support.”

It hasn’t been easy, Billups said, noting that Peace needed to change its hours of operation to better reflect student needs. Instead of driving the nonprofit’s bus to pick up kids in surrounding neighborhoods after school, Billups is up bright and early picking up children to bring to the center for remote learning.

Ultimately, Peace Neighborhood Center staff are there to make sure the learning process goes on without too much interruption.

“They were an after-school program – now they’re a school,” said AAPS International Partnerships Coordinator Jennifer Nemecek, who is the district’s liaison at Peace. “They need more help and quick answers because kids are online. They’re missing class, so we need to solve these issues right now.”

The COVID-19 pandemic has largely eliminated Peace’s ability to use its army of more than 250 volunteer learning tutors, with social distancing and capacity issues limiting its ability to have them on-site.

Peace Neighborhood Center Youth Programs Director MaryAnn Johnson said the nonprofit’s focus has shifted to more on-site door knocking in neighborhoods where children and families might need support. Additionally, the transition from largely helping children with social and emotional growth to being sources of academic support has not come without its share of growing pains.

“It’s tricky, wherein the past we’ve been able to provide one-on-one academic support to all of the kids, we’re not able to do that now, just to kind of limit the number of people in the building,” Johnson said. “Tutors filled such a big part of our mission. We need to think about how we can provide that support without that support necessarily being in the building.”

Margolis said the district will continue to work toward expanding learning networks on-site through Connections+ at nonprofits like Community Action Network and Avalon Housing as it moves toward hybrid and in-person learning.

The concept is different from some of the learning pods that have been sprouting up around Ann Arbor and Washtenaw County, Margolis said, in the sense that they are helping students who are in need of assistance, rather than hiring a tutor to facilitate their remote learning.

“We know there are a lot of pods families have formed, but that wasn’t really the intent to go into people’s homes and set those up,” Margolis said. “We’re really looking at the community centers that are serving the most at-need students.”

With children spending their morning and afternoon at the center before finishing their final block of classes at home, the time they spend at Peace Neighborhood Center will ideally help jumpstart their online learning, Billups said.

“We knew if we didn’t support kids being up early in the morning that we would have kids who would oversleep” he said. “If we get you up in the morning and get you home with lunch, there’s a better chance you’ll log in and finish the afternoon.”

Coming to Peace Neighborhood Center since she was in kindergarten, Jakya Hugan admits things are different inside the building as she kicks off her junior year at Pioneer High School.

With everyone wearing masks, it’s hard to read their emotions, Hugan said, but the experience of being around classmates and longtime friends helps settle some of that awkwardness.

Hugan said having the staff at Peace help her with technology issues and guide her through online learning provides an extra bit of motivation to make it through her remote learning.

“It’s not really difficult for me to do it at home, but I just have to give myself that energy,” Hugan said. “Sometimes, it’s like I don’t have anyone pushing me like a teacher would. (Peace staff) hold you to a high standard and they’ll push you to do more and get into the work, rather than just watch.”

After students arrive at Peace in the morning, they have breakfast before splitting up into different rooms, with about 10 students in each room situated at their own spread out tables.

When a student experiences an issue with an online learning platform at around 9 a.m., Gamble tells them to choose one of the “break options” Peace has posted that include reading a book, writing in their journal, computer games or work on the “milestones in my life” packet the neighborhood center has provided.

The student chooses a book and a morning snack as Gamble takes her laptop out of the room to troubleshoot with the district. The entire time, Peace staff survey the room to make sure students are staying on task.

The quiet and solitude Peace offers can be a bit awkward at times, Pioneer High School sophomore Sebastian Connor said, but it beats the alternative of learning at home.

“I’m more productive here,” Connor said. “At my house it’s kind of loud, because I have a lot of siblings.”