As schools debate about returning to online learning, the lack of internet access for many Americans is a big sticking point.

PHOENIX — For Monica Sauer Anthony, adapting to the challenge of a virtual classroom started with a reenvisioning of what it even means to teach at a performing arts school.

A choir can’t really rehearse in a virtual classroom much less give a live performance.

Neither can an orchestra.

There’s too much digital delay involved in streaming to get everybody synced up.

When Gov. Doug Ducey ordered Arizona schools to close in March because of the pandemic, Sauer Anthony was teaching Music History and Culture, and Beginning Woodwinds, Flute and Oboe Studies at Arizona School for the Arts in downtown Phoenix.

As ASA began to make the switch to online learning, Sauer Anthony, who’s since become arts director and vice principal of student services, said the faculty was trying to maintain as much of a sense of normalcy as it could.

They did some virtual performing in the spring but quickly learned that the production side of things could be extremely time-consuming.

“For all of the producers, it was like an additional full-time job to put on virtual performances,” she said. “So I thought, well, we have to go back to the drawing board.”

In May, Sauer Anthony gathered the teachers together to explore their options.

“I said, ‘Let’s get back to the roots of what it is to be an artist, not necessarily thinking about what is the perfect classroom situation but why do we do art?'” she said. “And this is gonna sound a little cheesy, but we went through a kind of vision quest on the importance of each individual art form.”

A class of 100?: COVID-19 plans overwhelm some teachers with huge virtual classes

What they came away with was a focus on exploring the creative process through collaboration, critical thinking and developing community.

All of ASA’s instructors are performers, either current or retired.

“So the challenges of being a performer through COVID was on the forefront of everybody’s mind,” she said. “But instead of thinking about what we can’t do, we looked at identifying what we can do.”

The teachers decided to look at their digital world as removing the four walls of the classroom, which provided more opportunity to work with students individually and in small groups. 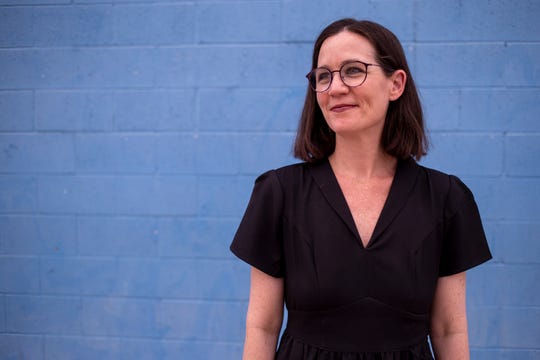 Vice Principal of Student Services Monica Sauer Anthony stands for a portrait on Sept. 11, 2020, at the Arizona School for the Arts in Phoenix. (Photo: Sean Logan/The Republic)

As a result, they’re more connected to the students’ individual progress instead of having up to 30 students in a classroom. And the natural chaos of that classroom is in many ways more manageable in the digital world.

“Chaos isn’t necessarily a bad thing,” Sauer Anthony said, “as long as it’s controlled and managed chaos, not people running around, throwing things around the room but more that energy and that heightened excitement that happens when you get together with a bunch of people.”

That chaos exists in the virtual classroom, but students are learning to mute themselves to keep distractions to a minimum.

Each student in the school now has a Chromebook and ASA has established a relationship with the Boys and Girls Clubs of Phoenix for students who need a more structured environment than they could get at home.

Head of School Leah Fregulia said, “We have several students who do their online education at the Boys and Girls Club, where they have computer labs and a green screen, a recording studio, all kinds of great things.”

Even then, the shortcomings of digital technology as it pertains to the performing arts remain, such as the fact that choir members can’t actually sing as a choir.

“When you play a piece of music,” Fregulia said, “if everybody isn’t on exactly the right stream, you can’t coordinate. The notes are either ahead or behind. So it’s tough. Especially when you’re training kids.”

Arizona School for the Arts students in a percussion class prior to the COVID-19 pandemic. (Photo: Courtesy of Monica Sauer Anthony)

“What our choirs are doing, instead of putting together a performance this quarter, they’re looking at music written within the past 50 years by African-American composers for choirs,” she said.

“And they’re actually learning the music but not necessarily singing it out loud together because of the delay. The older students are creating practice tracks for the younger students to practice along with at home.”

The students have also been able to practice by singing or playing along with the teacher with their mics turned off.

At the same time, they’re developing a deeper understanding of a piece of music —historical context, how the music was developed, the theory behind it, the cultural significance.

‘Not a sustainable model’: A peek at how one high school handles its COVID-19 challenges

Some teachers are enjoying that particular constraint.

“But because we’ve always been preparing a concert, they couldn’t do a deep dive into the learning that they can now.”

Instead of a single class working up five or six pieces of music to present, they’ll dedicate each quarter to a single piece, using sound editing software to record their individual parts and layer them.

“And then for the visual element that goes along with the piece they’re learning,” Sauer Anthony said, “they’ll have a historical analysis that gets presented.” 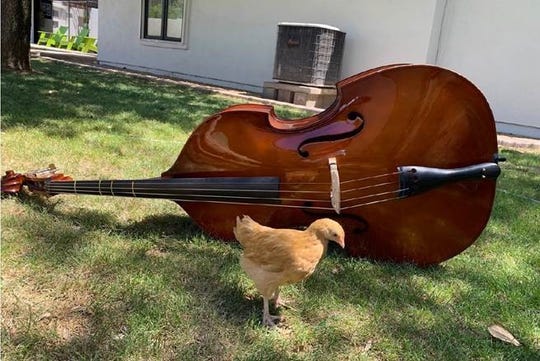 Students were assigned to take a photo of their instrument with an animal at home while virtual learning through Arizona School for the Arts. (Photo: Courtesy of Monica Sauer Anthony)

What you can’t get from online performances

“There’s definitely a rush that you get from being able to feel the energy off the audience,” Sauer Anthony said. “And that does speak to how you actually perform. So I think that definitely will be missed. But even though it’s lost now, it’s not lost forever.”

The traditional culmination of the school year for ASA students is Showcase, an inter-disciplinary performance for family and friends at the Orpheum Theatre.

As lead producer of Showcase for the past five years, Sauer Anthony did her best to reimagine the experience as an hour-long video at the end of last school year, with student musicians and singers recording their parts along to a scaled down version of the song.

What she learned is that it took a team of 13 teachers 10 hours of work for each minute of video produced. So for this coming Showcase, if it’s virtual, they’re leaning toward the students editing the sound and video.

“The volume of material produced will be smaller,” Sauer Anthony said. “But the students will be learning more skills.” 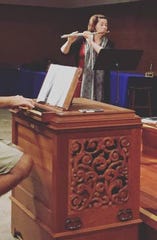 Producing the Showcase on video

One thing a video Showcase couldn’t hope to capture is the energy, excitement and sense of community backstage at the Orpheum.

“That was the hardest part for me to lose,” Sauer Anthony said.

To try and recapture a bit of that excitement, she let students have a bigger say in what Showcase would be.

“Instead of the teachers deciding, ‘All right, we’re doing this piece and you’re just gonna have to learn it and like it,’ it was much more student-driven,” she said.

To recapture the sense of community, the school encouraged students to watch the video with friends and family on ASA’s YouTube channel.

“We realized that virtually streaming it, we were able to include some of our alumni and people who can’t necessarily always come to Showcase in the audience,” she said.

“So it was actually kind of like an aha moment. We could still have the Orpheum performance but also be doing this YouTube channel and sharing it with so many more.” 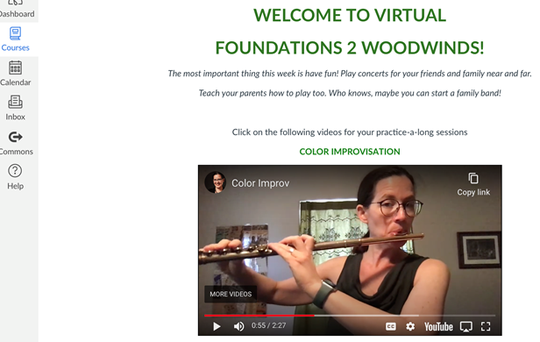 Screen shot of a guided practice video for Arizona School for the Arts students. (Photo: Courtesy of Monica Sauer Anthony)

The school is all remote through the end of this quarter at least and still deciding whether to start bringing students back to the physical classroom for the second quarter.

Either way, it’s likely that the arts will stay online for now.

As Fregulia said, “We simply cannot gather 50 kids in the classroom for choir. No matter what we do.”

It’s all still very much a work in progress.

“It took a little bit to get there, but we’re doing all right. And we’ve gotten such an overwhelming positive response from families, which is just a testament to how committed our teachers are to connecting the students to the creative process.”

At the same time, removing the arts from our culture due to social distancing has only underscored the value of the arts.

“I think we’re realizing now more than ever how fundamental the arts are to our community,” Fregulia said.

“Especially in times that are uncertain and tumultuous, maybe even a little frightening, especially to our kids, I think that bringing us together through the arts is what reassures us and hold us together in a lot of ways.”