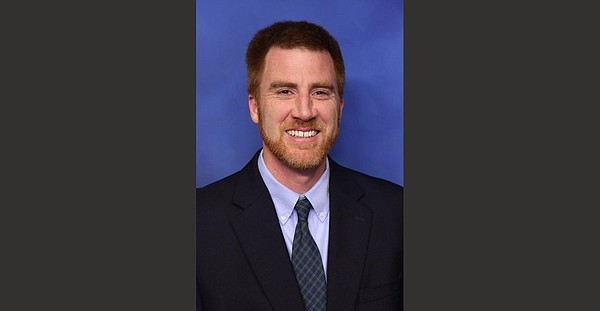 The high school football season is entering its first week of conference play, and one of the state’s top health officials is stressing safety as teams keep playing.

Dr. Joel Tumlison, a physician specialist with the Arkansas Department of Health, said that he’s been pleased with how football programs have adapted to coronavirus protocols for the 2020 season.

“I think the schools have done a pretty good job in general,” Tumlison said. “We want to try to keep the spread down.”

However, there have been several bumps in the road this week.

As of Thursday, 15 conference matchups scheduled for tonight were affected by covid-19, including Conway at Little Rock Southwest, Little Rock Parkview at Greenwood, Jonesboro at El Dorado, Texarkana at Magnolia and Arkadelphia at Nashville.

Overall, there have been 34 known games affected by the virus this season, including 19 during the first four weeks from Aug. 27-Sept. 18. There were some teams that were able to find opponents to play in place of the teams struck by covid-19, but ultimately, teams such as Crossett and Prescott were forced to cancel two games.

It’s a situation that Tumlison as well as officials in the governor’s office, the Arkansas Activities Association and the health department weren’t blindsided by.

“We would have loved to gone through the season without any cancellations,” Tumlison said. “But it was not going to be an unexpected thing of having cancellations. It was to be expected this year.”

Lance Taylor, the executive director of the Arkansas Activities Association, agreed with Tumlison.

“We all hoped we could have played every single game,” Taylor said. “But we were going to have hiccups. We tried to plan for those hiccups.”

Crossett, which won the 4A-8 Conference and advanced to the Class 4A semifinals last season, hasn’t played since Sept. 4 against Magnolia. The Eagles had to cancel their Sept. 18 nonconference game at McGehee and tonight’s 4A-8 Conference home opener because of at least eight players having to quarantine.

If a person has to quarantine, that person must be isolated for 14 days. They must remain at home and cannot participate in any activities and have any visitors in their homes.

A school’s point of contact, which could be a school nurse or an administrative person, will receive notification of a positive covid-19 test of a student or an employee.

That contact will look for signs and/or symptoms at the school with students and employees that are believed to have been infected. The district will then compile a list of probable close contacts and notify the contact of who needs to go through a 14-day quarantine.

Five days after its game against Magnolia, Crossett quarantined eight football players after they were believed to have come into contact with someone who tested positive for the coronavirus, Superintendent Gary Williams said.

Williams said Crossett went through contact tracing with the health department. The players were tested, and there were no positive cases inside the program from the Sept. 9 quarantine date.

While there were no positive cases for the Eagles, Williams understood why the health department policy is in place, but didn’t express frustration over it even though they have missed two games.

“It is a respiratory virus,” said Williams of the coronavirus, which has helped cause more than 200,000 deaths in the United States this year. “You can do things the right way, but you could still come into contact with someone and still contract the virus.”

Prescott Superintendent Robert Poole said the football program had three positive cases. Poole added that several players also had to quarantine. The Curley Wolves canceled their final nonconference game Sept. 18 against Hope and their 3A-5 Conference opener tonight against Horatio.

The quarantine process was a learning opportunity for some players, Poole said.

“Prescott football is a big deal,” Poole said. “It’s a tradition down here. I just think some of our kids came to practice and said, ‘I feel good, I want to practice.’ They don’t realize the importance of trying to keep everyone safe.

“Sometimes, you have to make the decision for them. So, we said let’s educate them on the virus. If we want to have a football season here, we have to be safe.”

“You don’t want to spread it [the virus] to another person,” Tumlison said. “Then, that will really affect the team.”

Taylor is part of Gov. Asa Hutchinson’s sports advisory committee along with Tumlison and said the quarantine protocol in place is beneficial.

“That’s part of the protocol,” Taylor said. “That’s there for safety so it doesn’t spread.”

Tumlison admitted he was skeptical at first about having contact sports such as football being played in 2020. But once he met with committee members and took part in discussions, he was in favor of playing football this fall.

“Our goal is to have fewer people sick,” Tumlison said.

Teams will be placed on the playoff bracket using the following criteria: Total number of conference wins; head-to-head results, average number of tiebreaker points and a coin toss. An opt-out date of Oct. 26 is available for teams that decide to not play in the playoffs, but teams that are entered in the brackets and have to cancel a game because of covid-19 during the playoffs must forfeit their spot.

Taylor is confident the season will finish on time, but with a different playoff system.

“We want to finish,” Taylor said. “We want for [students] to be able to follow the rules. The right thing is to wear that mask as much as possible. When you’re off the field and not competing, wear that mask, social distance and wash your hands.”

Conference play begins tonight for most of the state’s high school football teams, but there are 15 games that have been affected by the coronavirus as of Thursday. The canceled games are considered a “no-contest.”