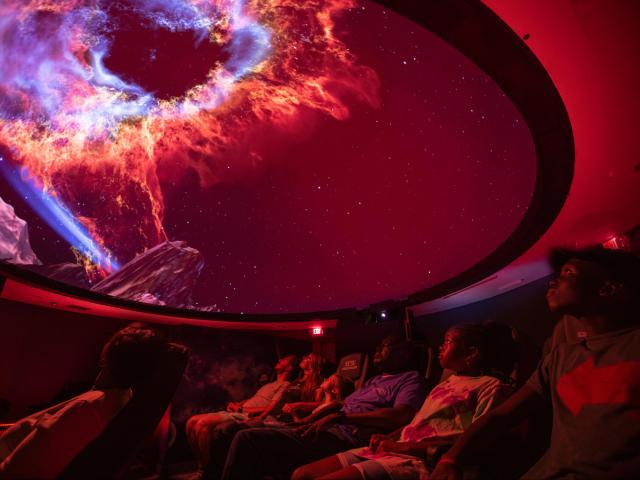 This article was written for our sponsor, Visit Elizabeth City.

Elizabeth City is home to not one, but three different institutions of higher education: Elizabeth City State University, the College of the Albemarle, and Mid-Atlantic Christian University. From one-of-a-kind programs to valuable community partnerships, each school is using its strengths to benefit the students and communities in Elizabeth City and beyond. Schools in Elizabeth City have experienced rare growth — and they’re ready for their reputations to start making waves across the region.

“At ECSU, this is our third admission cycle under my leadership, and this year we are 13 percent above where we were last year. To grow in double digits when we’re in a pandemic is significant, and so I’m grateful for the work that the faculty, staff, and alumni have put in,” said Chancellor Karrie G. Dixon, ECSU’s current chancellor. “For a long time, our story has been a secret in North Carolina. I told my campus community when I arrived, this will no longer be a secret. Everybody needs to know about what’s happening at Elizabeth City State University.”

While ECSU offers 30 different academic degrees on undergraduate and graduate levels, the school is the only university in the state, both public and private, that offers a four-year degree in aviation science. As the signature program of the school, the department has grown from two airplanes to 12, offering concentrations in avionics, aviation management, air traffic control, and unmanned aircraft systems. This program draws people from all over the state and outside of North Carolina.

Nearby at the College of the Albemarle, the community college is hoping their truck driving program can train and build the workforce on a more local level.

“Our truck driving program is very region-relevant, because we have so many industries that have a demand for commercially licensed drivers. We’ve had several donations for the equipment that was needed, and we’re very excited to be able to partner with different businesses in order to bring this program to light,” said Amy Alcocer, executive director of foundation and development at the College of the Albemarle. “We’re really focusing on emerging programs in the area, and we’ve had about four scholarships that have already been put into play as well, because these programs are definitely things that have been needed for some time.”

Elizabeth City’s other school, Mid-Atlantic Christian University, focuses on the variety of majors available in their Bachelor of Science and Bachelor of Arts programs. Business administration is one of the most diverse offerings, with concentrations in global business marketing, human resource management, sports management, and organizational leadership.

In addition to the academic programs, both MACU and ECSU offer a wide range of extracurriculars and athletics to choose from. At ECSU, the historically black university has ten competing athletic programs, while MACU offers seven.

“We’re excited about the mighty Vikings. Our student athletes have done a significant job in increasing their academic profile across all our teams. We have a number of student athletes with a 4.0 GPA — and we always say that in a student athlete, the student part comes first,” said Chancellor Dixon. “They have to perform in a classroom before they think about performing on the field, on the court, on the golf course, or wherever. We’ve built a championship culture, because we know how important it is that our student athletes understand their value in the university setting, but also how important it is for their success.”

If you’ve never been to an ECSU football game, the excitement from the pep rallies, tailgating and Viking festivities aren’t to be missed. The school spirit draws crowds that include students, alumni, and sports enthusiasts from in and outside of town.

While the College of the Albemarle doesn’t offer as many extracurriculars as its counterparts, the school finds its strength in its ability to help students enter the workforce as soon as possible and at an affordable price.

“They can get into a program in less than a year and get right into the workforce. We have several companies that we work with, like Hoffmeyer and Sumitomo, that help students line up a job before they graduate,” said Alcocer. “It’s pretty phenomenal what a community college can do in comparison to the four-year university. The workforce demand is now, and we’re excited to be able to help students and communities through our partnerships.”

At the College of the Albemarle, the school leadership has found a blend of strategies works best, especially given current times. Some classes are a hybrid of online and in-person, some are fully remote, and some operate in person — like cosmetology.

“It’s amazing that education can be done anywhere — even in your own home. We can still show up and work, and we even had a parking lot open so that people could pull up to campus and get any wifi access they might need while people are still practicing social distancing,” said Alcocer. “We’ve taken care to make sure those accommodations were made so that we never skipped a beat — and so far, we really haven’t.”

Each of these educational institutions is also working to benefit the community in Elizabeth City and beyond.

For example, the Performing Arts Center at the COA is a proscenium house that seats approximately 1,000 guests and hosts a full season of exciting events and performances each year. The Khan Planetarium at ECSU is a planetarium that screens shows in its Star Theater and also offers educational and science resources that are open to the public. The planetarium’s mission is to, “serve as a community outreach program and academic support unit that provides educational programming (PK-College level) to ECSU students and faculty, regional schools and the community at large.”

Both are top-notch, one-of-a-kind educational and visiting opportunities for those who don’t live in Elizabeth City.

Additionally, outreach programs, like COA Alumni Connect, engage those who have graduated from Elizabeth City colleges and universities, but who want to stay involved and get connected.

“The initiative, developed by Dr. Lyndasu Wynegar, wife to COA’s president, Dr. Robert Wynegar, is well underway as connections are made with local businesses that employ COA graduates,” stated the COA in a public Facebook post.

Leaders like Dixon and Alcocer are also taking care to continue chasing goals that benefit their respective schools. At ECSU, Dixon and her team have put together a strategic plan for 2020 to 2025 that serves as a roadmap of where they hope to see the school go. So far, they’ve been able to hit all of their major benchmarks.

At the College of the Albemarle, they hope to continue pursuing the community partnerships that have already brought them success, offering scholarships to students who would benefit from them most.

“We get letters that former students write to us about what the scholarship has done for them, and it’s phenomenal. They’re ready to pour their skills into the community, and then also look forward to the day they can give back to the college that took the opportunity to take a chance on them — it’s just full-circle,” said Alcocer. “It really shows an investment in the community, and ultimately those individuals will get jobs within the area. It all builds the economy within our community and brings that full circle around.”

This article was written for our sponsor, Visit Elizabeth City.