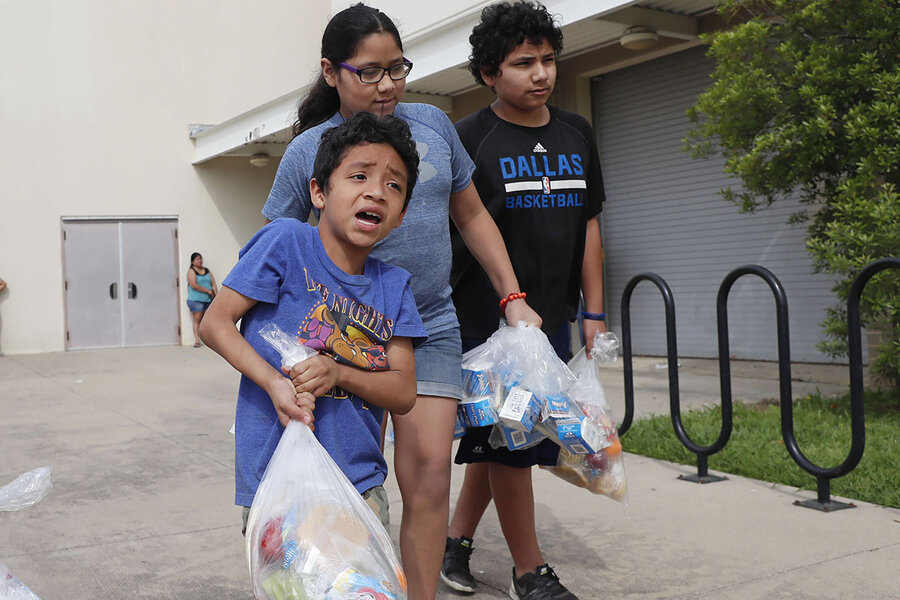 A school choice voucher doesn’t mean much to a hungry child. I should know. My mother, a longtime teacher, fed her students encouragement­ – and peanut butter crackers – before big tests. She knew she couldn’t expect kids to succeed when their stomachs were rumbling.

Yet a hungry belly isn’t the only sign of failing infrastructure in education. Consider the digital divide. Recently, in Salinas Valley, children sat on the ground outside a Taco Bell, using the restaurant’s internet to do their homework. “Salinas Valley is 45 minutes from Silicon Valley,” County Supervisor Luis Alejo said at the time, “and here we have such a huge divide that’s gone on for years but now it’s only amplified because of this pandemic.”

Meanwhile, on the opposite coast, the governor of South Carolina faces a lawsuit for using education funds from the CARES Act to prop up private schools instead of public education in a low-income county where schools perpetually underperform even when there’s no pandemic.

As much as we talk about politics and preference in education, we are missing a key component: poverty. It’s time to sort through the chatter of the school choice debate and address a fundamental issue affecting far more than where kids go to school.

Discussions about school choice, like most political issues, have been polarizing in the current political climate. The pandemic has only exacerbated that, but it may also be clarifying a fundamental choice lurking behind the public vs. private debate: whether we’re going to let parents fail – because if parents fail, life becomes much harder for children.

As most teachers will tell you, they don’t just have their biological kids. They nurture hundreds or even thousands of kids over many years. That was certainly true of my mom, who used to give her students peanut butter and cheese crackers before a standardized test, along with a rhyme for the times:

My mom’s rhyme was cool, but those crackers represented her conscientiousness. I can’t help but wonder how many of her students – her other kids – had those crackers as their first meal of the day.

As much as we talk about politics and preference in education, we are missing a key component: poverty.

Back in 1999, my mom took a job as a teacher specialist in Allendale, South Carolina. She was part of a state-based takeover that lasted from 1999 to 2007, initiated by then-State Superintendent of Education Inez Tenenbaum due to poor academic performance. It’s worth mentioning that Allendale County isn’t just one of the poorest school districts (and counties) in South Carolina – it’s one of the poorest in America.

According to census data, Allendale County has a median household income of $24,560, which is below the poverty threshold of $26,200 for a family of four, based on Department of Health and Human Services Poverty Guidelines.

The state of South Carolina took over the school district again in 2017 due to the same concerns, but it’s worth asking, Is the problem strictly academics? Could another force be at work?

It could be argued that South Carolina’s state government had failed the residents of Allendale County long before it took over their schools, due to its neglect of this rural community. Ideally, education should provide a level playing field for children, regardless of race, gender, or their parents’ wealth.

The reality is different – and dire. How can we expect kids to succeed on standardized tests when their stomachs are rumbling?

Yet a hungry belly isn’t the only sign of failing infrastructure in education.

Last month, a photo of two children with their computers in front of a Taco Bell went viral. What were they doing? Using the restaurant’s Wi-Fi to do their homework.

That divide was especially glaring for the kids in front of Taco Bell, because they were within an hour of Silicon Valley, a tech mecca. Luis Alejo, the county supervisor, retweeted the photo and challenged state officials to create a universal broadband infrastructure bond for students. “Salinas Valley is 45 minutes from Silicon Valley,” he told CNN, “and here we have such a huge divide that’s gone on for years but now it’s only amplified because of this pandemic.”

The girls and their family were eventually given a mobile hotspot, and fundraising efforts yielded a six-figure sum. That type of charity shows the goodness of people. Still, what do we do about the other children suffering through disparities in access?

Finding stopgaps in educational inequities will require good faith discussions about public and private education. Public and private options shouldn’t be seen as competitors, but as complements. Yet those conversations get muddied when governments act in bad faith.

What Governor McMaster billed as a “school choice” option felt like a deliberate transfer of public school funding to private education. In a state and country with clear disparities in education, the move appeared insensitive.

Yet Mr. McMaster’s ideology regarding school choice is in lockstep with the current administration and its education secretary, Betsy DeVos. It’s out of step, however, with the National Education Association, the largest labor union and interest group for public school teachers and staff in the country, whose website flatly condemns the administration.

The evidence is damning, but it’s also heartbreaking. What’s happening in education reflects what’s happening in our country. Our inability to address the fundamental issues behind the polarizing politics leaves us with perpetually bad choices.

Get the Monitor Stories you care about delivered to your inbox.

In the case of areas such as Salinas Valley and Allendale County, far too many parents and children are left with two choices – slim and none.

It’s the illusion of choice.