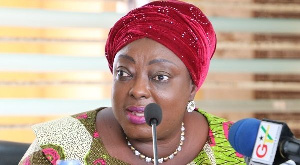 Freda Prempeh, the Member of Parliament (MP) for the Tano North constituency, has urged parents to give their girl children the best of education for a secured future.

She said educating the girl children would help to control teenage pregnancy and domestic violence in the communities.

Mrs Prempeh, also the Deputy Minister for Gender, Children and Social Protection, was speaking at a day’s meeting with queens to mark the International Day of the Girl-Child at Duayaw-Nkwanta in the Tano North Municipality of the Ahafo Region.

The meeting aimed at deliberating on the challenges of the youth, particularly the girl children and how to overcome such challenges to help them to become responsible future citizens and leaders.

Under the theme ”My Voice, Our Equal Future,” the event was organised by the Ministry of Gender, Children and Social Protection and attended by queens drawn from the Tano North Constituency.

Mrs Prempeh urged parents to be more responsible and conscious of the welfare of their children, particularly the girl children.

The MP entreated parents and the public to recognise the value and wealth of girl children and to make sacrifices to help them to attain quality education to become good future leaders.

She said parents must protect their girl children against all forms of domestic violence, child abuse, rape, defilement and early child marriage.

Mrs Prempeh entreated queens to organise community durbars to sensitise the youth on reproductive health and sex education to become aware of the dangers of early pregnancy.

She called on the youth to avoid unacceptable lifestyles and rather concentrate more seriously on their studies by being closer to their books.

Mrs Prempeh appealed to the queens to vote massively to retain her as the MP in the constituency and the NPP government in power in the 2020 general elections for more development in their communities.

Mr Faisal Bawa, the programmes officer for the United Nations Population Fund (UNPFA), appealed to the queens to educate women in their communities to practice family planning of their choices to help control child birth.

She said provisions had been made to support widows and the aged with basic needs such as health and food.