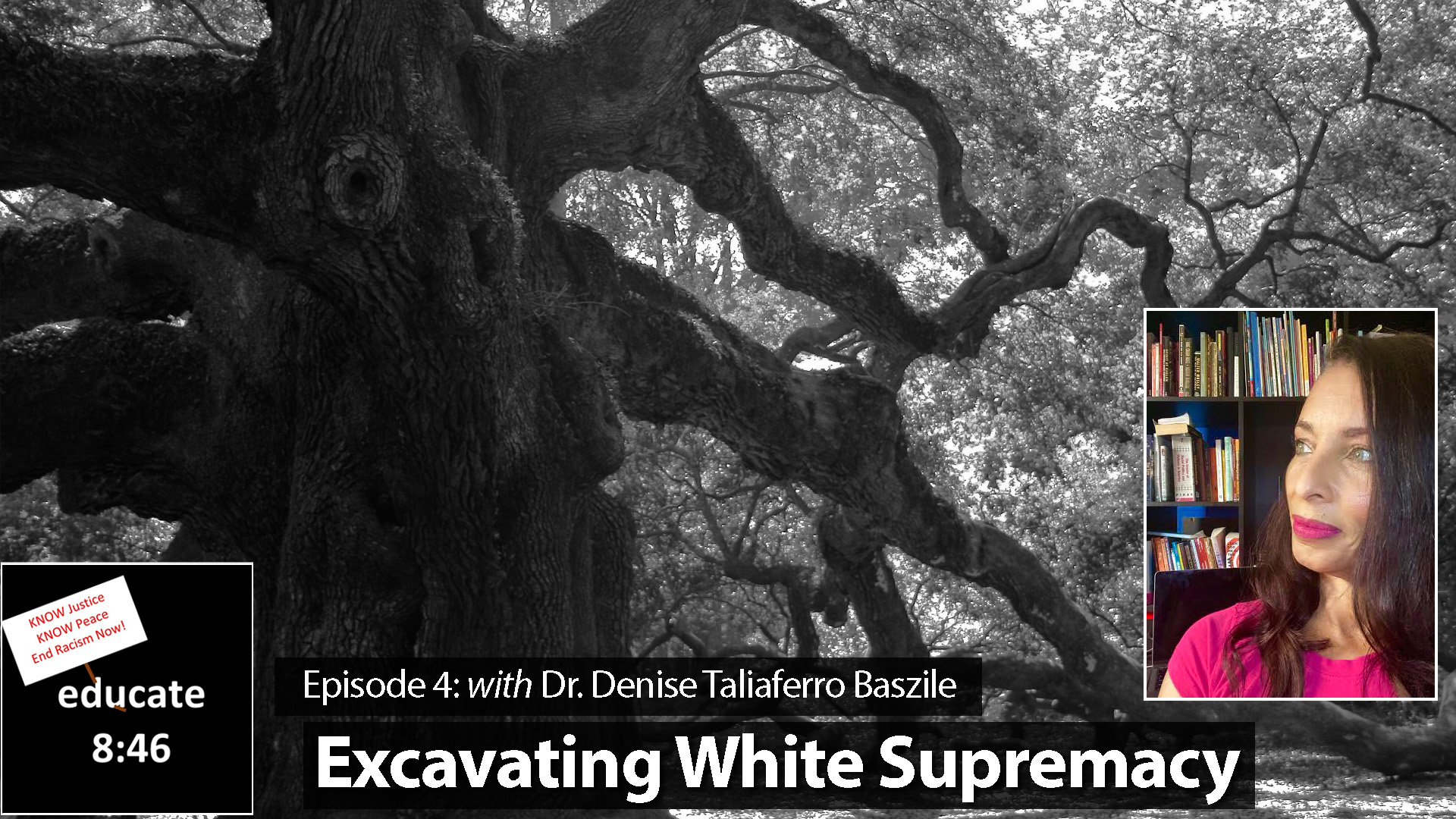 How is it that after decades, and in some cases centuries, of so-called “progress” that we still find ourselves confronted with grave and dangerous racial disparities in almost everything? On this episode, learn why systemic racism will persist until we excavate the roots of white supremacy.

8 minutes and 46 seconds is the amount of time that officer Derrick Chauvin had his knee on the neck of George Floyd, draining the life from his body. So the premise of Educate 8:46 is simple — what can we teach and learn that can support the struggle against white supremacy and anti-blackness, and all inter-systemic injustices in 8 minutes and 46 seconds?

Today on Educate 8:46, I want to try to tackle a question I get quite often about why not use the language of systemic racism, versus the language of white supremacy? So let’s to pretend for a minute that there is a tree growing outside the front of your house. The tree is big and foreboding, taller than anything else in sight. The branches are heavy and low, and in the wind, they scratch your windows and they attack people coming up your driveway. The leaves are pine cones or needles clog your gutters, cover your grass, cover your driveway, and even the sidewalk in front of your house. And worst of all, the roots are cracking up the driveway in the walkway and creeping into your neighbor’s yard. The tree leans and threatens with each passing storm to crash down on your house, or your neighbor’s house, and to bring down the entire crisscross of electrical lines weave through the cricket tips of branches.

Systemic racism refers to the ways in which racial discrimination and inequity affect the many systems that make up our society, economic, educational, health care, and criminal justice to name a few. White supremacy is like the roots, the foundation, or maybe the operating system that manifests and sustains systemic racism. The distinction is kind of important because in our efforts to mitigate racism, we tend to invest in strategies that don’t address the underlying operating system of white supremacy. In other words, we trim the tree instead of pulling it up at its roots. So the problem persists.

Just think about it. We thought we solved the problem when Lincoln signed the Emancipation Proclamation, and we entered the season of reconstruction, where coalitions of abolitionists moved quickly to begin the work of reconstructing American democracy toward more equality, equity, and justice for all. Unfortunately reconstruction efforts were quickly and successfully derailed. And in their wake, we saw the terror of lynching, convict leasing, and black codes, which entrenched us in many decades of Jim Crow officially in the south, and unofficially in the north.

Our government, in some cases, paid compensation to slave owners, but reneged on the promise of 40 acres and a mule to those formerly enslaved. Thereby continuing a long history of locking them out of places, programs, and possibilities that were offered to others. Social security, GI bills, union housing, universities, and more. In the decades between 1896 and 1970, we engaged in a long and costly and arduous struggle for civil rights, but those victories were quickly, in some cases and slowly and methodically and others, rolled back, eroded, worked around.

So today, we still find ourselves embroiled in key civil and human rights struggles over the same things: Educational equity and desegregation, voting rights, adequate and affordable and culturally responsive health care, living wage, and equitable and just consideration in our system of criminal justice. It is this roller coaster ride of racial injustice in our country, up and down and around and around, that led Derek Bell, a civil rights attorney and activist, a third martial protégé, the first black male professor to be tenured at Harvard Law School, to note that the persistence of racial injustice needed to be called out. So he once summed it up this way, “It appears,” he said, “that my worst fears have been realized. We have made progress in everything, and yet nothing has changed.”

Now, we can zoom in on any one of the issues mentioned above and asked ourselves a seemingly simple question: How is it that after decades, and in some cases centuries, of so-called progress, that we still find ourselves confronted with such grave and dangerous racial disparities in almost everything? Education, health care, application of legal defense and protection for indigenous communities, poor white communities, central American immigrant communities, Asian communities, and for black people trying to be self-determined in a society that needs them to be otherwise.

In other words, how and why does racial power persist even though we have removed almost all the “white only” signs from everything from water fountains to college admissions? And, if in response to this lingering nagging frustrating question, we could avoid the urge to simply blame those who are suffering for their own suffering, and instead pursue the roots. Seek out the historical records. Follow the numbers. Navigate the policy trail. Engage with the mounds and mounds of data. Listen to the voices of those struggling to breathe under the knee of white supremacy.

If we do these things, any of these things, we can see the complicated, but clear pattern emerge. We can see the roots for what they are, and we can see that the roots of racial power grow, adapt, reproduce, tangle themselves around everything. And most importantly we can see how it’s happening. It’s not a magically self-sustaining entity that no one can stop. Economic, cultural, social, political, juridical systems rely on people. And the investment they make in them, knowingly or unknowingly, freely or under duress.

So systemic racism will persist as long as we dedicate ourselves to trimming the branches, rather than excavating the roots of white supremacy. In excavating the roots, don’t get me wrong, it’s not easy. It requires us to confront our biggest, most daunting challenge: Ourselves. We will ultimately need to decide how we are willing to grow, if we are willing to grow, what we are willing to sacrifice, or what more we will have to sacrifice. Where we are determined to stand. How we will bring forth a world where we nurture more justice, more equity, more peace for more people. And whether we can see that peace, prosperity, and love we desire as humans being will manifest in direct correlation to the peace, prosperity, and love we create, expand, and share with each other.

This news, for sure, will urge some of us to seek bliss in ignorance. Others of us will be paralyzed by the sheer prospect of facing down such a formidable undertaking. And others will be fired up and ready to go, but uncertain of where or how to begin.

So I always say little things can make a big impact. So vote and spend some time helping others to do so. Listen to an informative podcast, have a real conversation with someone living on the other side, or read a book that will expand your knowledge and challenge your thinking like Isabel Wilkerson’s Caste. Derrick Bell’s Faces at the Bottom of the Well. Thandeka’s Learning to be White. Or, check out Baratunde Thurston’s Ted Talk, “How to Deconstruct Racism.” In other words, let’s challenge ourselves to build the inside strength and focus we need to excavate the roots.

In the next episode, we’ll hear from Dr. Lewis Brownlee, who will introduce us to the phenomena of intergenerational racism. Until next time, thank you for listening to Educate 8:46 in the name of George Floyd and all others whose lives have been unjustly ended by the power of white supremacy.