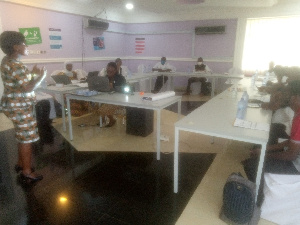 Some Civil Society Organizations (CSOs) and Non-Governmental Organizations (NGOs) in the Upper East Region have formulated a road map to advocate mainstreaming of Reproductive Health Education into the curriculum of basic schools in Ghana.

The CSOs include Youth Harvest Foundation Ghana, AfriKids Ghana, Planned Parenthood Association of Ghana, Coalition of NGOs, Rise Ghana, Society for Empowerment and Social Justice, and Camfed among others

This was made known in Bolgatanga at a CSOs dialogue organized by the Youth Harvest Foundation Ghana (YHFG) as part of its flagship project, “Evidence TO Action: Sexual Health Education Advocacy Project”.

Mrs Priscilla Nyaaba, Executive Director, YHFG, said reproductive health education was very important to the development of children and therefore needed to be taught in schools especially at the basic level to equip them with their sexual and reproductive health rights.

Mrs Nyaaba said that would help safeguard the young people especially the females from Sexual and Gender-based violence, unwanted pregnancies, early or forced marriages as well as Sexually Transmitted Infections such as HIV/AIDS.

She said government, as well as CSOs and NGOs, had over the years tried to end gender-based violence but the indicators still showed high levels of negatives and that called for a paradigm shift and collective approach.

The Executive Director said the project intended to employ research and advocacy at both local and national levels to gather empirical evidence on the need to mainstream the programme into the school curriculum.

Ms Augustina Achigibah, the Project Officer, YHFG, noted that statistics from the Ghana Demographic Health Survey in 2018 revealed that about 14 percent of adolescent girls in Ghana had begun having children.

She noted that statistics from the Ghana Health Services in 2018 also indicated that while the national level of teenage pregnancy stood at 12 per cent, the Upper East Region recorded 15.8 per cent.

The region also recorded 28 per cent of child marriage as against the national figure of 19 per cent, she said, and attributed the cause largely to lack of accurate information on their sexual and reproductive health rights.

The Project Officer noted that mainstreaming the sexual and reproductive health rights issues into the basic school system would help empower the adolescents with the knowledge that would enable them to stand for their rights as well as improve their wellbeing, self-esteem, attitudes and protect their rights from being abused.

Mr Silas Ayaba, the Project Manager, AfriKids Ghana, who expressed his outfit’s readiness to support the move, explained that the implementation of the Comprehensive Sexuality Education (CSE) would be the solution to the issues of sexual and reproductive health rights, however, it was poorly presented and Ghanaians did not buy into the concept.

The Project Officer noted that a bit of the concept was found in the Science and Social Studies syllabus and it could be repackaged to ensure that it had the needed attention to make an impact on the adolescents.

Madam Jaw-haratu Amadu, the Head of Programmes at Rise Ghana, noted that due to the cultural and religious beliefs of the Ghanaian society, there was the need for traditional and religious leaders to be sensitized to fully appreciate and support the concept.

GhanaWeb is not responsible for the reportage or opinions of contributors published on the website. Read our disclaimer.