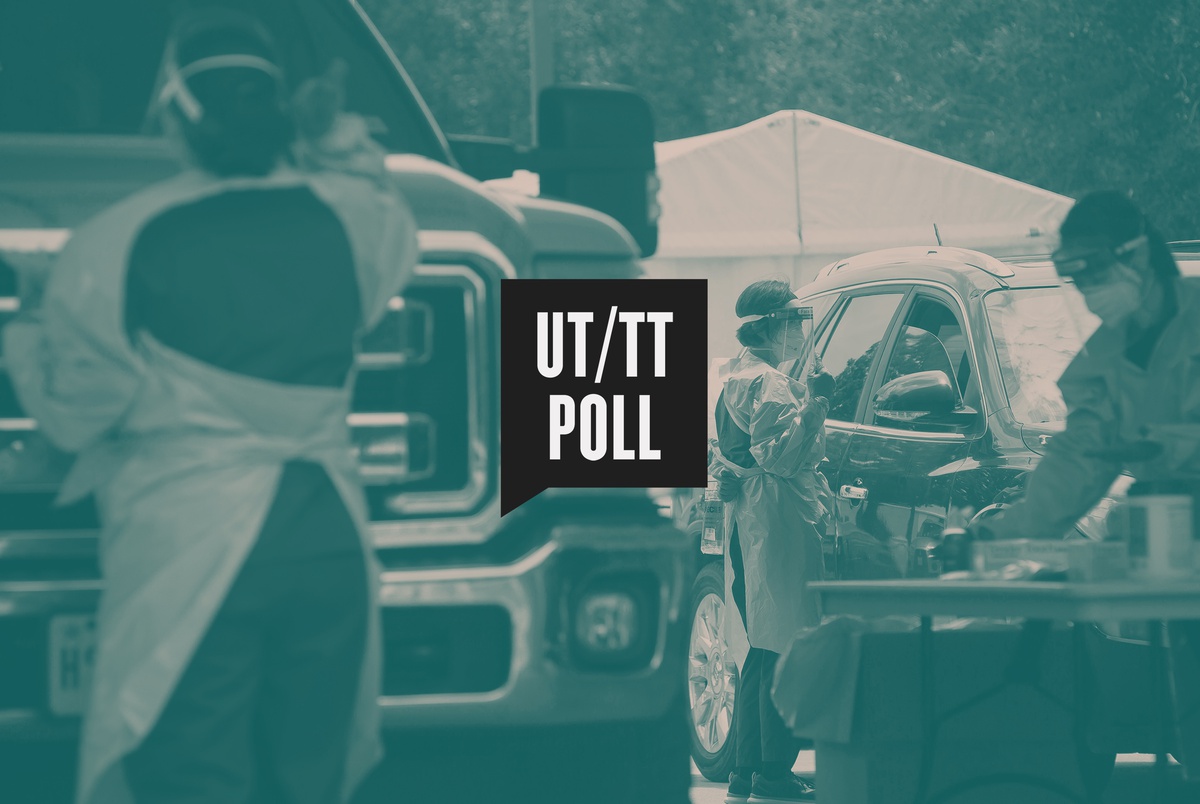 Their concerns about “you or someone you know” getting infected are similar: 44% are extremely or somewhat concerned, while 32% say they’re not very or not at all concerned. As with some other questions about the pandemic, concerns are higher in populations that have been hit harder by COVID-19. Among white voters, 37% are extremely or very concerned about themselves or people they know being infected. Among Black voters, 53% have high concern, and among Hispanic voters, 57% have that level of worry.

The vast majority of Texas voters believe the coronavirus is serious, but Democrats are much more likely than Republicans to consider it “a significant crisis.”

Among all voters, 53% consider the pandemic “a significant crisis,” but that majority is driven by the 87% of Democrats who classify it that way. Among Republicans, only 24% consider it a crisis, while 47% chose “it’s a serious problem, but not a crisis” to characterize their view. More than one in four Republicans — 27% — said COVID-19 is either “a minor problem” or “not a problem.” Only 3% of Democrats share that view.

Groups that have been more likely to suffer from COVID-19 were more likely to see it as a crisis. Among Black voters, 75% classify it that way; among Hispanic voters, 65% do. Among white voters, 44% call the coronavirus a significant crisis.

Rating responses to the pandemic

“What you’re finding is people expressing less concern about contracting the virus, reemerging into society more, but also not necessarily rating the job that anyone is doing any better or even rating our overall attempts to contain the virus particularly well,” said Joshua Blank, research director of the Texas Politics Project at the University of Texas at Austin.

The state numbers are similar. Overall, 51% say state efforts are going well, including 77% of Republicans and 24% of Democrats. In April, 66% of Texas registered voters thought the state efforts were going well.

“Republicans and Democrats are living through this experience in very different ways,” Blank said. “This result really illustrates that they started from very similar positions. At this point, whether you’re a Democrat or a Republican not only describes your political views, but also your response to the pandemic.”

Only 26% of Texas voters approve of the way the news media has handled the pandemic, down from 34% in April. Among Republicans, only 10% approve; among Democrats, 47% approve.

Texas voters seem to have settled into their expectations about how long the pandemic’s effects will last. Asked how long it will take for things like social gatherings, workplaces and sporting events to return to normal, 55% said that will happen either “in the next year” or in “a year or more.” About as many — 42% were more optimistic, choosing “it is already,” “in the next few weeks,” or “in the next few months.” That’s a distinct change from April, when 71% were expecting a quick end to the pandemic and only 26% who expected the return to normal to come in the next year or longer.

COVID-19, the economy and public education

The results were similar for a question that posed “children being taught in person at their public schools, even if it hurts efforts to control the spread of the coronavirus” against controlling the disease “even if public education has to take place over the internet with children at home.” While 34% said they’d prefer having the kids in school, 55% set controlling COVID-19 as their priority.

Again, however, those overall opinions mask a lot of difference. Opting for virtual education to control the spread was the more attractive option to 83% of Democrats, 64% of independent voters, 50% of men, 60% of women, 72% of Black voters and 69% of Hispanic voters. On the other side, 56% of Republicans favor teaching students in person, even if that means hurting efforts to spread the coronavirus. White voters split without a majority on either side, with 48% opting for virtual school and 41% opting for in-person classes, one group saying control of the coronavirus should be the priority, the other putting that second.

Most Texans —53% — feel the quality of public education in the state is “excellent” or “good,” up from 46% who graded the schools that way in a February UT/TT Poll. At the same time, 43% said the quality of public education has gotten worse since the beginning of the pandemic, while 32% said it’s about the same and 7% said it has improved. Voters with children in school were more positive about the quality of schools, with 71% grading it as excellent or good. As for public schools during the pandemic, 14% of those parents said they’ve improved, 42% say education has gotten worse, and 41% of school parents say it’s about the same.

The University of Texas/Texas Tribune internet survey of 1,200 registered voters was conducted from Sept. 25 to Oct. 4 and has an overall margin of error of +/- 2.83 percentage points. Numbers in charts might not add up to 100% because of rounding.

Disclosure: The University of Texas at Austin has been a financial supporter of The Texas Tribune, a nonprofit, nonpartisan news organization that is funded in part by donations from members, foundations and corporate sponsors. Financial supporters play no role in the Tribune’s journalism. Find a complete list of them here.