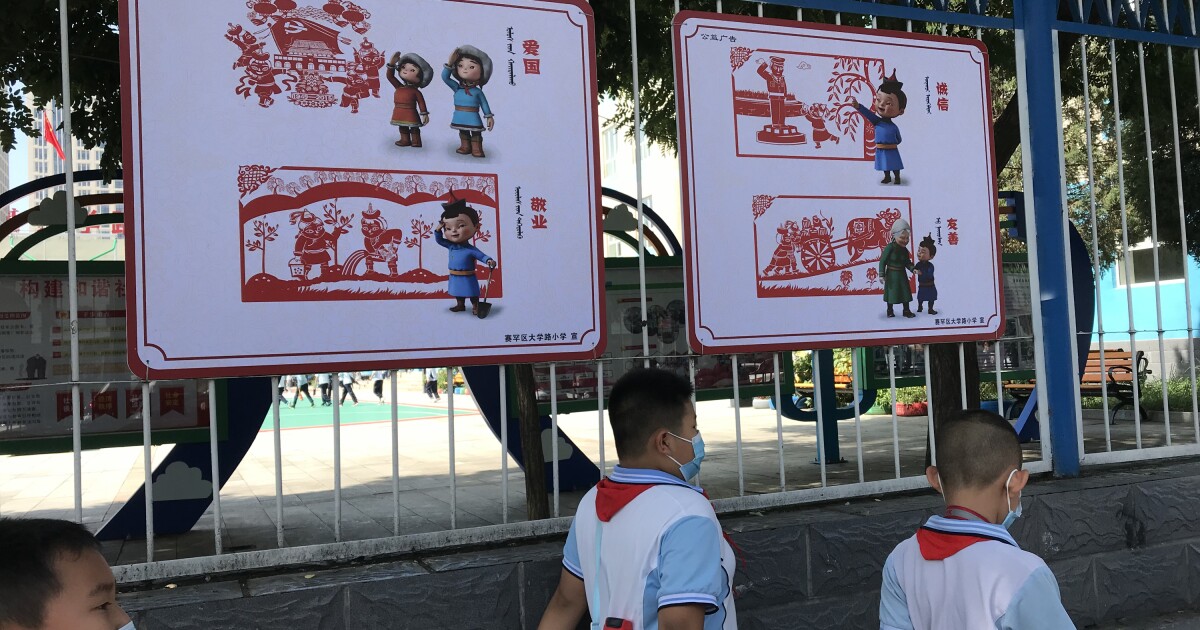 “They are talking about great ethnic unity. Is this what unity looks like?” said the Mongol grandfather, who did not give his name. He and his wife, Ochir Bao, a woman in her 60s, had come to this school — Hohhot National Experimental School, an elementary school in the region’s capital with mostly Mongol students — to watch their grandson go to class against his will.

Their grandson had participated in a region-wide school boycott, they said, sparked by the sudden news last week that elementary and middle-schoolers across Inner Mongolia — a region of sprawling grasslands where nomad warriors once roamed that is twice the size of California and home to the descendants of Genghis Khan — would begin a program to transition half their classes from Mongolian to Mandarin.

The new “bilingual education” program, announced only days before it was implemented, has stirred resistance. Thousands of teachers, students and parents signed petitions that were shared quickly online. They wrote their full names in circles to avoid singling out any leader for punishment and stamped their fingerprints in red. Several popular Inner Mongolian bands also shared petitions on social media. Parents and teachers began discussing holding Mongolian-language classes at home.

The program was criticized as the latest attempt by the Chinese government to diminish cultural identity, similar to actions it has taken in the border regions of Tibet and Xinjiang, both historically home to non-Han Chinese ethnic groups. The Southern Mongolian Human Rights Information Center, a New York-based rights group, shared dozens of videos from across the region showing students protesting on and off campuses, chanting “Protect our mother tongue,” and parents clashing with police as they tried to pick up and bring their students home.

In one video, students in matching blue and white school uniforms marched and then stood on the road with arms locked, chanting in Mongolian as a crowd around them cheered. In another, middle-schoolers pushed through police barricades at their school entrance, apparently to escape forced participation in the language program. In several videos, protesters stood on the streets singing in Mongolian, some closing their eyes and swaying as the chorus swelled: “I am Mongolian!”

The government’s response was swift. In Hohhot this week, The Times saw police vehicles, uniformed officers and plainclothes men deployed around the Inner Mongolia Normal University Affiliated Middle School, where police had stopped an earlier protest, and in front of the Hohhot National Experimental School, the elementary school where the grandparents watched for their grandson.

Bao said her grandson had to come back to class because his parents’ workplaces threatened to fire them otherwise. “We had no choice,” she said. “We want our grandson to go to school, of course, but not to forget his mother tongue.”

“It’s too outrageous,” her husband added. “What century are we living in? They’ve snatched away our rights.”

A police source within Inner Mongolia who requested anonymity for his protection told The Times that security forces across the region were working overtime. They’d been detaining several people a day for the last two weeks in his local police station alone, he said. He showed The Times images of arrest orders on the police force’s platform and said they received new targets every two to three hours, usually people who had been protesting or supporting protests online.

The police were entering these Mongols’ homes and making them sign pledges to not speak against the bilingual program anymore, the source said. If they did not comply, they were detained, he said, and would become “key individuals,” marked in China’s police databases as threats to security requiring targeted surveillance and control.

“It’s terrifying,” he said. Those arrested included elderly people, pregnant women and middle school students, he said, and those marked as key individuals would be put under lifelong surveillance.

The policeman said that he had refused to participate in the crackdown and that many other Mongol police who had school-age children had refused to come to work at all.

“I’m Mongol. I won’t arrest Mongols,” he said, adding that there was no legal basis to arrest people who were fighting for their mother tongue. “I want to live by my principles.”

On Wednesday, several public security bureaus in eastern Inner Mongolia published wanted lists with names and head shots of people accused of “picking quarrels and provoking troubles,” a nebulous charge often used against dissidents, lawyers and activists in China that comes with a maximum jail sentence of five years — or 10 years for multiple offenses.

The head shots appeared to be zoomed-in surveillance camera images of people participating in protests, many of them standing on the street or raising cellphone lights in the air. Some of the wanted lists specified that the “suspects” had been involved in incidents near schools.

The language program has stirred anger and defiance because many Mongols see it as the final step in a decades-long attempt at cultural erasure, said Enghebatu Togochog, director of the Southern Mongolian Human Rights Information Center. There are roughly 6 million Mongols in China, according to the latest census taken in 2010, almost double the number of Mongols in Mongolia. But within Inner Mongolia, Mongols have become a minority within their own region, constituting just about 18% of the population.

“Mongolians feel that language, the last stronghold of their national identity, is about to be wiped out by this new policy,” said Togochog. “That’s why Mongolians feel urgency: If we lose this, we lose everything. We cease to exist.”

Mongols have often been seen as a “model minority,” coexisting relatively peacefully with Han Chinese despite the killings of at least 22,000 Mongols during the 1960s Cultural Revolution and mass displacement in a controversial “eco-migration” program through the 2000s, under which Mongol herders were moved into urban areas in the name of protecting the grasslands.

Mining projects run mostly by Han Chinese often took over former grazing areas. Many rural schools that taught in Mongolian were left empty and shut down in the process. Today, the number of Inner Mongolians attending school in Mongolian has declined from nearly 60% in 1990 to just over 30%, according to an article by University of Pennsylvania Mongolia expert Christopher Atwood.

That changed with Xi, under whom China launched a “second generation” approach to ethnic minorities in recent years. It rejects the old Soviet-based system, which allowed relative autonomy and preservation of language and culture in designated regions, in favor of a new “melting pot” approach that emphasizes assimilation into Han Chinese culture.

The stated purpose of these policies is to strengthen patriotism and loyalty to the nation and the Communist Party. But they are often implemented through force and intimidation.

A Times reporter who visited the Mongol school in Hohhot was surrounded by plainclothes men who put her into a police car. They took her to the back building of a police station, where she was interrogated and separated from her belongings despite identifying herself as an accredited journalist. She was not allowed to call the U.S. Embassy; one officer grabbed her throat with both hands and pushed her into a cell.

The reporter was detained for more than four hours. She was then forced to leave the region, with three government officials and a policeman accompanying her to a train and standing at the window until the train left for Beijing.

The police source who spoke with The Times said he feared that much worse would happen to the Mongols who are resisting the language changes — including himself. He knew about similar measures taken in Tibet and Xinjiang in recent years, and did not expect the Chinese government to show mercy to Inner Mongolia.

“There are many people within the system who are against what’s happening, but we are trapped,” he said. “We need the world’s attention.”

The Times also visited two Mandarin-language elementary schools on Tuesday morning. Large crowds of chattering parents, grandparents, babysitters and tutors waited at the school gates to pick up their children during the lunch break. The students marched out of their classrooms in neat columns, chanting “One, two, one, two, one,” then ran laughing into stationery shops across the street or followed babysitters and relatives to attend lunchtime tutoring programs.

Several Han Chinese parents said that they hadn’t heard about a bilingual program in the Mongol schools and that there was no Mongolian-language tutoring. “Why would we need that? We’re all Chinese,” said one woman who did not give her name.

At the Mongol school, security forces outnumbered parents, who paused to watch their children go past the police, then walked away in silence.