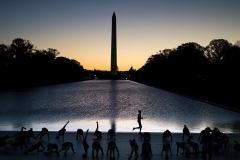 People exercising near the reflecting pool on the National Mall. (File photo by BRENDAN SMIALOWSKI/AFP via Getty Images)

(CNSNews.com) – Adult obesity in this country increased in 2019, the federal Centers for Disease Control and Prevention said in a September 17 update.

“Having obesity puts people at risk for many other serious chronic diseases and increases the risk of severe illness from COVID-19,” the update noted.

The 2019 map shows that all states and territories had more than 20 percent of adults with obesity.

As the map below shows:

— In 12 states (Alabama, Arkansas, Indiana, Kansas, Kentucky, Louisiana, Michigan, Mississippi, Oklahoma, South Carolina, Tennessee, and West Virginia) 35 percent or more adults were obese. This is up from nine states in 2018.

— Only one state (Colorado) and the District of Columbia were found to have 20%-<25% of obese adults.

The data show that obesity impacts some groups more than others, just as COVID has been found to do.

— 34 states and the District of Columbia had an obesity prevalence of 35 percent or higher among non-Hispanic black adults.

— 15 states had an obesity prevalence of 35 percent or higher among Hispanic adults.

— 6 states had an obesity prevalence of 35 percent or higher among non-Hispanic white adults.

The update noted that obesity decreases by level of education. Adults without a high school degree or equivalent had the highest self-reported obesity (36.2%), followed by high school graduates (34.3%), adults with some college (32.8%) and college graduates (25.0%).

Young adults were half as likely to be obese as middle-aged adults. Adults aged 18-24 years had the lowest self-reported obesity (18.9%) compared to adults aged 45-54 years who had the highest prevalence (37.6%).

“We encourage the use of person-first language (e.g., ‘adults with obesity’ or ‘20% of children ages 12-19 have obesity’ and not ‘obese adults’ nor ‘20% of children are obese’) when discussing topics like obesity and other chronic diseases, as well as respectful images.”

The CDC refers readers to The Obesity Action Coalition’s “Guidelines for Media Portrayals of Individuals Affected by Obesity.”

CDC also notes, “There is no single or simple solution to the obesity epidemic. It’s a complex problem and there has to be a multifaceted approach.”

But – as everyone knows — a healthy lifestyle is key: “Knowing your body mass index (BMI), achieving and maintaining a healthy weight, and getting regular physical activity are all actions you can take for yourself to combat obesity.”

The CDC offers advice on achieving and maintaining a healthy weight here.