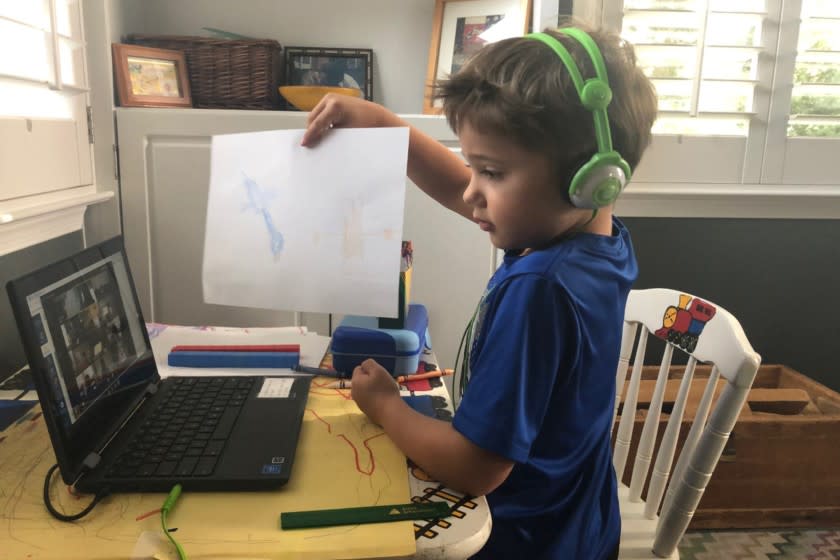 As most public and private school students in California continue to study from home, a majority of voters say the state’s schools are not prepared to offer high-quality distance learning, although they are more positive about their own local schools, according to a poll released Thursday.

Parents worry that if children are at home for the rest of the year, it will result in learning loss for all students, but especially for the most economically vulnerable who suffer from hunger or housing insecurity. Low-income parents, in particular, worry that prolonged distance learning will mean they won’t be able to get back to work, according to a poll commissioned by EdSource, a nonprofit education news organization.

The poll was conducted online between Aug. 29 and Sept. 7 by the FM3 Research polling firm and surveyed 834 registered voters. At the time of the poll, the school year had already begun for three-quarters of the 200 parents or guardians surveyed.

One major issue that has emerged since the pandemic upended education nationwide is how to motivate children when they aren’t in the classroom and don’t have in-person contact with teachers.

These concerns are shared by parents. Four out of five say the biggest challenge of distance learning is sustaining their children’s interest to study. Parents also worry about insufficient instructional time with a teacher and say it’s hard for children to work on their own, as well as understand assignments.

“Many times, my granddaughter comes to my room to have a conversation,” said Anita Flemington, whose granddaughter attends school at the Pasadena Unified School District. “I ask her, ‘Are you on break?,’ and she replies, ‘No.’”

Fully 75% of registered voters, including parents, say that distance learning is worse than in-class instruction. A major reason parents hold such a dim view of distance learning stems from their experience in the spring when districts quickly had to make the transition. Just over half of parents rated their child’s spring experience with distance learning as “not too effective” or “not at all effective.” Only 7% rated it as “very effective,” with another 27% rating it as “somewhat effective.”

One-third of parents were unable to cite anything positive about their experience with distance learning in the spring. As they brace for most children being at home this fall, the majority of parents say it will be difficult for them to manage distance learning for their child this year.

More than 70% worry about learning loss for all or most children, as well as the lack of social interaction with other children. The greatest concern, shared by 80% of poll participants, is the impact of learning loss on vulnerable children, including those experiencing hunger, homelessness or upheaval at home.

However, when it comes to their own schools, about half of parents say they feel their schools are prepared, compared with 40 percent who feel they are unprepared.

When asked about strategies they might use to help manage distance learning, for the most part, parents seem stumped. Nearly half of parents say they don’t know any strategies to help their children.

One in four parents say they are considering moving their child from public school to a private, parochial or charter school as a result of pandemic-related issues.

“I moved my 7th grader to a charter school, which is something I would never have considered pre-pandemic,” said Caryn Cherry, a Riverside Unified School District parent. “He was completely falling under the radar with distance learning.”

The poll also showed a majority of California voters support Gov. Gavin Newsom’s handling of education issues, including his executive order issued over the summer requiring distance learning in schools that are located in counties on the state’s COVID-19 monitoring list.

Two-thirds of voters support the governor on the distance learning issue, with 53% strongly supporting him and 29% opposing his stance. Parents give Newsom slightly lower ratings in his overall handling of education during the pandemic, and appear divided on their level of support, with 49% expressing approval and 47% disapproval.