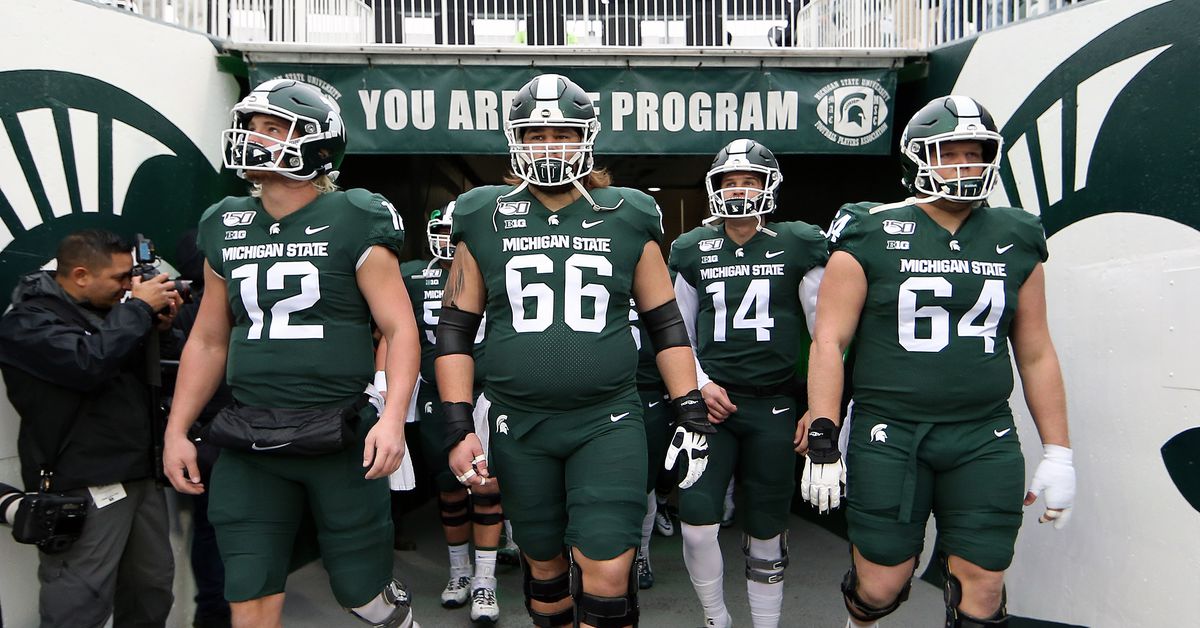 Over the summer and in the lead up to the delayed but now-likely-to-happen season, I have provided a variety of mathematical analyses and previews of the 2020 college football landscape and Big Ten schedule. Briefly, over the years I have developed my own college football power rankings and tools to translate those rankings into predictions and probabilities related to how the season might progress.

Most recently, I presented my odds for each Big Ten team to win both their respective division and the conference as a whole. I also presented the number of expected wins for each team based on a series of probabilistic Monte Carlo simulations which take in account the historical uncertainty of the preseason rankings.

Now that we are less than two weeks away from the actual kickoff of a Big Ten game, several sources have started to release division and conference odds, as well as the over/under for the number of total regular season wins. If we connect these dots, my mathematic analysis provides exactly the type of information that might be useful if someone where inclined to place a bet or two on college football. In that spirit, I would like to share a bit of “bad betting advice” for the upcoming Big Ten season.

Table 1 below summarizes both the results from my (AKA “Dr. Green and White’s) previous simulation and odds that I found from www.SportsBettingDime.com in late September. Of course, these numbers are very fluid, but they provide a starting point for this discussion. I also took the liberty of converting the Las Vegas money lines for the division and conference races into probabilities, as shown in the final two columns. Also note that the over/under win values are based on the currently scheduled eight conference games.

While Table 1 essentially contains all of the data, it is easier to compare the numbers graphically. Figure 1 below compares the calculated division and conference odds to the Vegas-derived probabilities shown above.

In order to make the data easier to see, insets are included in the upper-left-hand corner for teams with smaller odds to win either the division or conference. In general, the results of my simulation match the odds given by Vegas rather well. But, there are some clear differences.

The main outlier is Ohio State. As expected, the Buckeyes have the best overall odds to win both the Big Ten East and the overall Big Ten. But, based on my analysis, their Vegas odds are way too high. A glance at Table 1 shows that Ohio State was the composite No. 2 team in the country back in the early summer when I pulled the rankings from various preseason sources (Athlon, Lindy’s, and ESPN’s FPI).

To put this a bit in perspective, in order to win the Big Ten East, Ohio State will very likely need to beat Penn State in State College in Week Two. As a first approximation, it stands to reason that Ohio State’s odds to win the Big Ten East should be no greater than the odds to beat Penn State. In order for OSU to have a 75 percent to beat PSU, the Buckeyes would need to be roughly a nine-point favorite, on the road. If Penn State really is a top-five caliber team, this seems very unlikely to me.

Speaking of Penn State, the curiously short odds for the Buckeyes seem to be translating into curiously long odds for the Nittany Lions. My math gives PSU almost a 40 percent chance to win the East, while the Vegas data suggest those odds are closer to 13 percent. Maybe Vegas knows something that my computer doesn’t know, but based the data I have, Penn State looks like potentially smart bet for both the division and conference crown.

As for some of the teams with longer odds, Wisconsin seems to be undervalued in both the division and conference races. Iowa and Minnesota are also undervalued. How can all three of those teams be undervalued? The reason is that these specific odds seem to be overvaluing both Nebraska and Northwestern, who are the only other team that appear to be bad bets, based on my analysis.

Regarding the Big Ten schools from the State of Michigan, both MSU and Michigan seem to be slightly undervalued by the odds listed above for the division title, but the conference title odds both agree with my calculated odds to within half of a percent.

Another way to compare the probabilities that I calculate to the posted Vegas odds is to use the concept of expected value. In this context, the idea to estimate the amount of money that a bettor might “expect” to win based on the odds and the “true” probability that a given event will come to pass (such as a specific team winning the Big Ten). Consider the following simple example.

Let’s say that the money line for Pretend State to win the Big Ten was +300. This means that if someone were to bet $100 on PSU and the Pretenders were to win the conference, that person would get their $100 back in addition to $300 profit. But, if Pretend State were to get upset in Indy, the bettor would lose $100.

Using this same method and the numbers in Table 1, I can estimate the expected value for a wager on all fourteen Big Ten teams in both the division and overall conference race. The results of those calculations are shown below is Figures 2 and 3. For reference, the raw odds of success for each team are given at the top of each bar.

According the Figure 2, the two most promising “investments” in the division races from a betting perspective are Penn State and Illinois. Both wagers have a expected return of over $200 on a $100 bet (also known as a return on investment, or “ROI” of over 200 percent) Of course, a successful Penn State wager is far more likely to occur (40 percent vs. only three percent), but the potential payout for taking a flyer on the Illini might make it worth it.

The other potentially good bets on the division level include Purdue, Michigan State, and Rutgers with ROIs between 50 and 100 percent. Once again, the raw chance that MSU or Rutgers wins the East are both low, but the potential payback suggests that a small wager might make sense.

For Michigan, Maryland, Minnesota, Indiana, and Iowa, the divisional bets are all close to an ROI of 30 percent. Wisconsin is right at 15 percent, and as mentioned above, a bet on Northwestern, Nebraska, and Ohio State are not worth the investment.

As for the overall conference ROIs shown in Figure 3, Illinois is the surprise winner, with an ROI at close to 250 percent, but the raw odds are less than one percent, so that is likely not the best option. The same is true for conference wagers on Purdue or Indiana. However, betting on Penn State, Iowa, Minnesota or Wisconsin are projected to give a return between 75 percent and 200 percent with a reasonable chance of success.

On the other side of the graph are the likely bad conference bets, including both Michigan schools, Northwestern, Nebraska, Rutgers, Maryland, and Ohio State. Once again, the Buckeyes are still the most likely team to win both the Big Ten East and the Big Ten, but the meager potential payout makes OSU a bad investment.

This analysis also comes with several caveats. As mentioned above, all of the data and calculations above are derived from a simulation that relies on the preseason rankings as the primary input. In a normal year, the accuracy and variance of these rankings are well understood and accounted for. But, 2020 is not a normal year.

With players opting out, teams being quarantined, no fans in the audience, etc. the situation on the ground is much different than the pundits’ optimistic view back in the late spring and early summer. It is certainly possible that the Vegas odds listed above take these new unknowns into account. In other words, there is a reason that I called this article “bad betting advice.”

In addition, any betting line given by a casino is always in flux. So, while the expected return on investment calculations above are interesting, they are likely no longer valid. That said, I can still use the odds that I generate to suggest a break even point where the ROI moves from negative to positive territory. Those data are shown below in Table 2.

The way to read this table is simple. If a casino show a money line that is larger (more positive) than the value shown in Table 2, my math suggests that it is a “good bet” with a expected return on investment that is positive.

The final betting avenue that I have not yet mentioned is the area of total wins for each team. Table 1 provides the over/under for all 14 Big Ten teams as well as my projected expected win total for each team. Once again, this information is better visualized in a Figure.

I was not able to find the money lines for these bets, so I was unable to perform the return on investment calculations on this data set. Instead, I have provided the calculated odds that each team will either finish under (above the black diagonal line) or over (below the line) the posted over/under value. These odds come directly from the win distribution table in my Big Ten schedule analysis post (see Table 3).

That said, for those that like over/under wagers, the percentages shown in parenthesis give some insight into which teams might be better bets. If we use the school of thought that odds over 70 percent are a good bet, then with these over/under values, I would recommend taking the under on Ohio State and Northwestern and the over on Rutgers and Illinois.

If the posted over/under numbers move, the following table may give some guidance. For each Big Ten team, I give the numbers of wins where the odds for both the over and the under to hit exceed 60 percent. For example, for Ohio State I estimate that the Buckeyes have over a 60 percent chance to finish with at least six wins, but also over 60 percent chance that they do not run the table. Therefore, if the over/under is posted as 6.0, 6.5, or 7.0, it does not seem like a good value.

As for the Spartans, the over/under range is tight. Basically, MSU is quite likely to finish at 3-5. So, betting the over at 2.5 and the under at 3.5 both look like good bets. That of course assumes that it is ever a good idea to bet on (or against) MSU, which I will reiterate is a terrible idea.

That is all the #math that I have for you today. Enjoy one more weekend of Big Ten-free football this fall and until next time, Go Green.