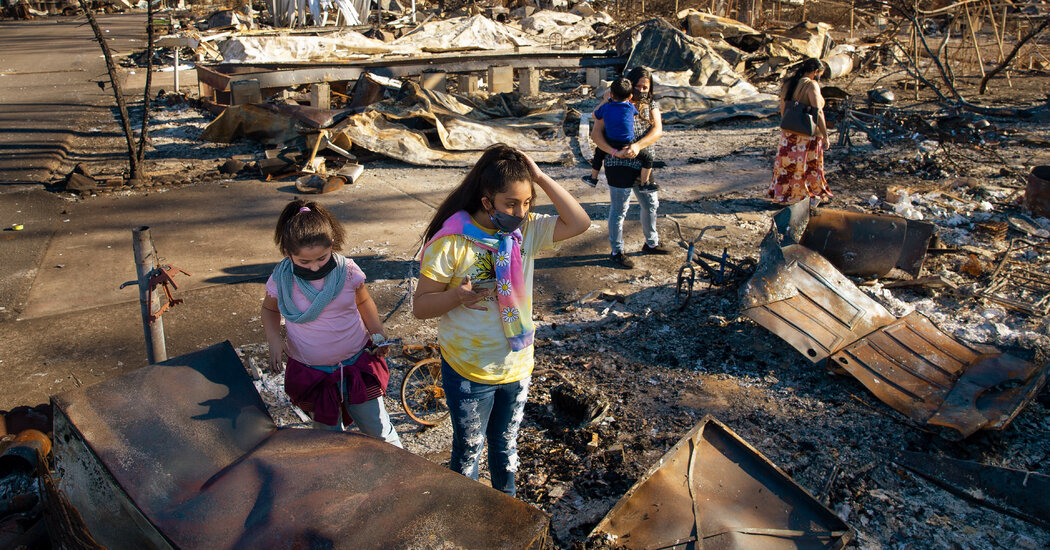 The last time Blandí Rodas walked out the door of her mobile home in Talent, Ore., school was the primary thought on her mind. All summer her 7-year old daughter, Kailyn, had talked of nothing else. She couldn’t wait to see her friends — even if it was just through a screen. After months of anticipation, online-only classes were to commence the next day.

On the morning of September 8, Kailyn stayed at home while her mother and 11-year-old sister, Evelyn, went to Talent Middle School to pick up a Chromebook lent to her by the school district to assist with distance learning. Then Rodas took off for her job at a local retirement community, leaving the two girls at home with their grandmother and 3-year-old brother, Liam. Just hours later, she received a text message from Evelyn: Their trailer park was enveloped with thick, black smoke. According to the fleeing neighbors, the 1,000-acre Almeda fire was blowing straight in their direction. As Rodas raced toward her family, encountering roadblocks at every intersection, Evelyn called 911.

When the police came to collect the family, flames were already burning a nearby mobile home. There was little time to put together a go-bag; the only thing Evelyn grabbed as she evacuated was her brand-new Chromebook.

The Rodas’s home was one of at least 2,800 structures burned in the Almeda fire, which tore through the small towns of Talent and Phoenix, Ore. in one day. The day before, on what was meant to be the start of class, an estimated 40 percent of students in the Talent-Phoenix school district lost their homes, according to Brent Barry, the district superintendent. At Phoenix Elementary School, which serves the worst hit population, 80 percent of students are now homeless, according to Pam Marsh, the district representative for southern Jackson County.

These families are once again preparing for the start of school. On Monday, September 28, students returned to their virtual classrooms, but families and teachers face a new challenge: How can they make distance learning work when students have no place to call home?

In the aftermath of a disaster, community support acts like Bubble Wrap, buffering kids from symptoms of post-traumatic stress, such as trouble sleeping, flashbacks, jumpiness and anxiety. After a disaster, school is crucial to maintaining social structure, said Ann Masten, a professor of child development at the University of Minnesota.

“Schools can play a critical role at multiple levels,” Dr. Masten said, “They provide not only a sense of normal in a disaster, they are often a community hub.”

Australia has done some of the most pioneering work in trauma recovery. After Cyclone Larry devastated North Queensland in 2006, researchers at the Mater Child and Youth Mental Health Service in Brisbane published a study in the Australian and New Zealand Journal of Psychiatry, citing that children who didn’t participate in school activities and reported having few friends in class were more vulnerable to developing post-traumatic symptoms.

For young children, the presence of reliable adults was key to recovery from a disaster. After Australia’s 1983 Ash Wednesday bush fires, which led to 75 deaths and destroyed 3,000 structures, psychiatry researcher Andrew McFarlane began a landmark study on trauma after natural disaster, following 808 children effected by the fire. Three years into the study, he published findings in The Journal of the American Academy of Child & Adolescent Psychiatry suggesting that caregivers’ ability to handle their own stress was important for children’s path to recover.

Mothers who became anxious, overprotective and preoccupied with intrusive thoughts were more likely to have children who remained anxious, angry and easily distracted. Even years after the fire, McFarlane saw connections between children’s trauma symptoms and their parents’ response to the disaster.

More recent studies have found that, just after a disaster, the emotional availability of caregivers helps to determine the likelihood that a child will recover from the event. Following the 2009 Jesuita Wildfire in Southern California, parental emotional support lessened children’s likelihood of developing anxiety, depression, anger and psychosomatic symptoms.

Schools can step in and provide support when parents themselves are traumatized. Familiar adults at school can also provide a buffering effect against trauma, said Travis Wright, an associate professor of counseling psychology at the University of Wisconsin-Madison.

“Being able to stay connected to their teachers and each other in the midst of this crisis will actually be really positive for them,” Dr. Wright said of the students in the Talent-Phoenix School District.

The structure of school also helps children make sense of a world that feels random and frightening. For a young child, a wildfire seems like it comes out of nowhere, said Dr. Wright. That disrupts their sense of cause and effect, interfering with their ability to comprehend other patterns in everyday life, from relationships to math. But through gently enforcing routines and rules, instructors can help young children find a sense of control.

“That not only helps them get back on track with their learning, but it also helps them feel safer and more regulated,” Dr. Wright said.

Teachers in the Talent-Phoenix school district are being trained to recognize how trauma manifests itself in children — like zoning out, lashing out at peers or breaking rules — and learning to respond in non-punitive ways. But they’re exhausted, and many of the district’s faculty have lost their own homes. As the school district prepares to weather one disaster — the trauma of the fires — they simultaneously have to confront another: distance learning without infrastructure.

Weighing the Pandemic Against the Needs of Children

One week after the Almeda fire, the Rodas family was living in a hotel room at the nearby Medford Ramada Inn. Hazardous air quality made it impossible to go outside, but the youngest children were staying upbeat. Kailyn was excited about the secondhand toys her mother’s boss gave the family. One, a three-foot plastic parking garage, sat in the small vestibule between the bathroom and door to the hallway. “It’s the only place they have room for playing,” Rodas said.

Kailyn was excited for school to start, but Rodas remains worried. “I don’t know how it’s going to work, because I’m trying to find a place to live,” she said. The room is cramped and the hotel has spotty Wi-Fi. Liam’s temper tantrums annoy Evelyn, who sometimes leaves the room to get away from his screaming. It’s not an environment conducive to learning.

Hundreds of families affected by the Almeda fire are in similar situations. They’re staying in hotels and camping in public parks. Family members and charitable strangers are offering spare rooms. In the wake of the fire, getting families access to the resources they’ll need for online learning could take months, said Lucy Brossard, the school district’s bilingual executive assistant of academics. Even before the fire, the region had unreliable access to high-speed internet, so — in addition to loaning Chromebooks — the district set up six Wi-Fi routers near high-density housing and trailer parks. All the routers, and many of the Chromebooks, have now burned.

School district administrators have decided that the needs of displaced children outweighed the risks of returning to the classroom, said Shawna Schleif, the principal of Phoenix Elementary School. In Oregon, schools aren’t permitted to resume in-person learning until counties see 10 or fewer Coronavirus cases per 100,000 people over a period of seven days. Talent and Phoenix are far from that goal, but have requested special permission to resume in-person learning.

The plan isn’t to bring every student back at once. Instead, the district will establish “annexes,” small satellite schools dispersed across the region. Not only will the annexes serve as socially distant learning pods, they’ll help the school district reach far-flung families. Already, the school district has established three annexes in places where a particularly high density of families are sheltering. On September 23, these annexes opened, and children arrived for the first time to use the internet and receive support with online learning. Pending government approval, annexes will soon serve as in-person classrooms.

Still, Rodas isn’t so sure about sending her kids back into the classroom. She worries about what would happen if the kids passed Covid to their grandmother, who is 64.

“My mom is my life too,” Rodas said. Knowing that there’s no way her three children will be able to learn until she finds a home, she’s left with an impossible choice: the health of her family versus her kids’ education. For now, she’s just trying to be the stable parent her kids need, until they can lean on their teachers for support.

“Sometimes, I’m kind of quiet and think about what I’m going to do the next day,” Rodas said, “I’m trying to be strong. It’s not easy, but I have to do it.”

Isobel Whitcomb is a journalist based in Portland, Ore. Her work covering ecology and health care ethics has appeared in Hakai, Bay Nature Magazine and Undark.