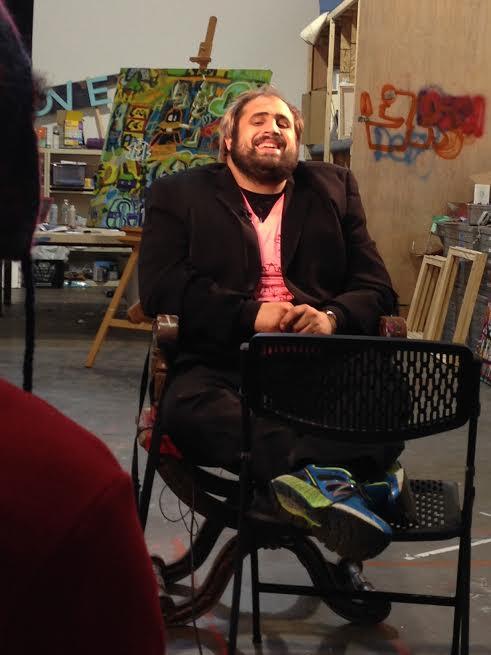 Internationally recognized artist Vito Bonanno taps into the daily emotional and social challenges of living with autism, placing his innermost feelings onto canvas. The New England-based artists’ work is image and concept driven and imbedded in his personal philosophy. His art contains the essence of his life, feelings, thoughts and dreams, coupled around objects or topics that “get stuck in his head”, including traffic lights, grids, ceiling fans, graffiti and pop culture. Corporate clients include Amazon, The Hartford NC, CBRE Nashville and City Block.

In 2009, Bonanno won an Award of Excellence in a juried competition for young people with disabilities, produced by VSA Arts and sponsored by Volkswagen in 2009. He was named one of 15 emerging young artists with disabilities and was honored during the artist reception in Washington, D.C. His winning pieces, ‘Ghost Town on Davenport Avenue’ was exhibited at the S. Dillon Ripley Center of the Smithsonian Institute in Washington, D.C. and then was part of a traveling exhibition that went on a two year nationwide tour of university and independent galleries. Additionally, a second winning piece titled ‘Southhaven People’, was on exhibit at the John F. Kennedy Center for the Performing Arts, Washington, D.C. before also partaking in the nationwide traveling exhibition that ran through September 2011.

Due to a lack of accessible art education programs for college age adults with autism and other similar neuro-diversities, Bonanno began private art classes at Creative Arts Workspace in New Haven in 2006 and has continued his formal training via private instruction from a variety of formally trained artists.

In January 2012, Bonanno unveiled his first Solo Exhibition, Unfiltered V: Vito Bonanno Riding with the Train Girls, at Akus Gallery at Eastern CT State University which included works on paper, canvas, video pieces, a student-artist interactive mural project and installations. Akus Gallery Director, Elizabeth Peterson stated, “The characters, objects and ideas that inhabit Vito Bonanno’s work act and interact in striking ways. Caught within the grids and map-like structures he imagines, they are often in a struggle between multiple worlds. He has found a way to tap in the intensity of focus and insight afforded him through autism to unleash a formidable creative power and vision.”

May 24, 2014 was the Opening Reception of Bonanno’s Solo Exhibition, Truck’n With Vito!, at Umbrella Arts Gallery, NYC. Bonanno and his team transformed a typical van into a pop up art gallery that traveled through CT earlier in the year. From May through July the roaming art gallery came to New York and made stops at various locations in the city, including Bushwick Open Studios, sharing Bonanno’s art and spreading the word for the need for increased accessible higher education in the arts for adults with autism.

Current and ongoing, Vito continues to work with various artist facilitators in his studio in Old Saybrook, CT expanding his knowledge of materials and techniques and further developing his creative vision. His unique view of the world provides a seemingly endless well of inspiration that fills his head with images and concepts until they spill over onto the canvas bursting on the scene in vibrant colors and hard to ignore imagery that can harbor obvious, but often secret messages.

Vito was chosen to participate in the prestigious global art competition Art Olympia in Tokyo, Japan 2015. Skatepark Krusty from Obsessions & Meditations was a First Round Winner. Chosen also to feature his work in Art for Autism at Pan American Art Projects Gallery in the Wynwood Arts District of Miami, Florida and was featured on Saatchi Art Homepage twice in a Row July 2015 hand-picked by Saatchi Chief Curator Rebecca Wilson. In 2015 Bonanno was one of 16 artists in the United States selected for a prestigious exhibition of previous awardees from the VSA Emerging Artists Program in the Kennedy Center’s Hall of Nations with sponsorship from Volkswagen Group of America. This exhibition was showcased as part of the celebrations for the 25th Anniversary of the ADA and 40th Anniversary of VSA, and included the work of select artists who represented the past 13 years of the VSA Emerging Young Artist Program; Curated by Stephanie Moore, ‘Daffy Goes to Waterbury with a Ninja Turtle’ and ‘SECR Toilet’ were chosen to be part of the exhibition.

In 2016 and 2017 Bonanno shifted gears and began creating a prolific collection of works that propelled him into a variety of gallery shows, US exhibitions and arts projects including Art Expo New York; Love Art Gallery, CT; Lotta Studio in New Haven, CT; Art Access Studio in Ohio; DADD Showcase and his most recent alignment with ArtLifting, which is a non-for-profit art organization that empowers artists living with disabilities through the celebration and sale of their artwork. ArtLifting is about creating opportunity, empowerment, and validation. Through ArtLifting, six of Bonanno’s original artworks were recently purchased by Amazon and hang in one of their corporate buildings in Seattle.

Bonanno was diagnosed with PDD/Autism just before his 4th birthday. Because he was language delayed, his parents and teachers developed strategies that tapped into his high visual acuity, utilizing storyboard styles to relay academic and social information. He was also encouraged to draw in storyboard format to express his feelings. The storyboard grid remains prominent in his work and studio preparation today and is a poignant reminder of a boy who was trapped in his own mind.

The New England-based artists work is image and concept driven and imbedded in his personal philosophy. His art contains the essence of his life, feelings, thoughts and dreams, coupled around objects or topics that “get stuck in his head”, including traffic lights, grids, ceiling fans, graffiti and pop culture. For more information about this artist, for inquiries or to commission a piece contact [email protected] / visit http://www.vitobonanno.com/

Covering the visual arts in Miami and South Florida, as well as national and international art news and information. Reporting on the local art scene and the worldwide community of visual arts, artists, creative organizations, personalities, trends and events.

This release was published on openPR.