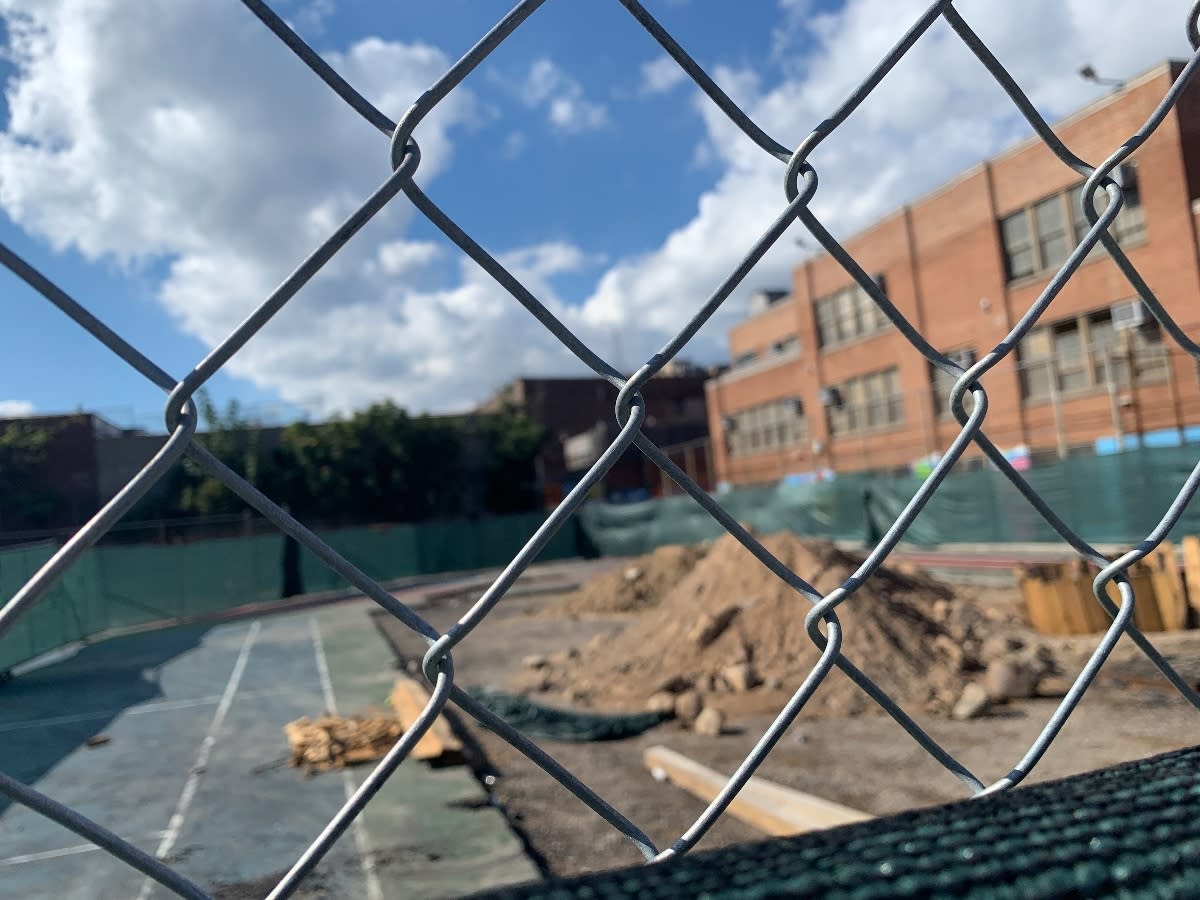 Despite only starting the work in August, the city had paused nearly all non-emergency school construction projects, a move local officials say was done to help with a coronavirus-induced $9-billion hole in New York City’s budget.

For P.S. 9, the pause means the fenced-in hole, which takes up about half the schoolyard, will stay indefinitely as staff struggle to use the outdoor space with proper social distancing.

Parents and staff held a rally Friday to call for the city to finish the project.

“My students need wide open spaces,”said Deidre Levy, who teaches kindergarten through second grade for special education students. “This has interrupted the way we operate as a school.”

Levy said the fenced-in area not only limits the number of kids that can use the schoolyard at any given time, but has made it more difficult to keep up social distancing during pick-up and drop-off time.

The fenced-in area nearly covers the pre-K entrance to the school, meaning preschoolers and their parents are forced to line up in an alleyway along the fence when getting to school in the morning.

Kids also get dangerously close to the construction site when they play outside, parents said.

“Children will try to get up underneath this,” Yvette Buckner, a fourth grade parent, pointed out.

Staff and parents also said they worry about dust from the construction site getting into the pre-K classrooms through windows, which they need to keep open for proper ventilation given coronavirus guidelines.

The Department of Education told Patch that they have been in touch with the school community and have told contractors to put in more safety barriers, fencing and screens. The projects will resume as soon as possible, a spokesperson said.

“Due to the unprecedented circumstances brought on by COVID-19, the vast majority of all non-emergency construction projects were placed on pause and we hope to resume them as soon as we can,” they said in a statement.

City Council Majority Leader Laurie Cumbo, who has reached out herself to the Department of Education and School Construction Authority, said Friday the pause on construction seems to come straight from Mayor Bill de Blasio’s office. City Hall did not respond to a request for comment from Patch.

“Mayor de Blasio, you have the ability to make sure our young people, not only at P.S. 9, but at every school all through out the city deserve to have open spaces,” Cumbo said Friday. “We’ve had to fight for so much over these last seven months and a playground should not be what we [have to] fight for.”

This article originally appeared on the Prospect Heights-Crown Heights Patch